Finally! The first post of the season! Welcome to OnVallartaTime!

First, the time just seems to slip away here when we’re on Vallarta time. The days are chock full of activities, of choices, of the chores of daily living, of living the slow, unhurried life of Mexico. Second, there’s the concept of “mañana,” which basically means “not today.” There’s always time to get things done, verdad? Do what you want to do today, there will be time to do the other stuff mañana.

And finally, There were technical difficulties. I started to write this post more than three weeks ago, and my site said “not secure” at the top. Well, we can’t have that! After days of trying to solve it on my own, I contacted the site host only to find out that such things aren’t supported and I had to solve it on my own. So the heck with them, I migrated the entire site to another host, one where the support is there (and of course, they charge an arm and a leg). But after many days of long phone calls and Googling, the site is finally up and running! Computers make our lives easier, right?

We arrived on Halloween. After a harrowing luggage mixup at the airport, we arrived at our homey apartment. We never know quite what we’re walking into, but everything was fine! Our caretakers did a good job. We really wanted to go take part in the Day of the Dead activities, but it was so darned hot! We basically hunkered down for a few days, venturing out only to go to the beach (where there’s often a slight breeze) or in the evening when things cooled off a little. Everybody was complaining about the heat!

But after a while, the weather slowly started to cool, friends who weren’t already here started arriving, and we got back into the swing of things. We had Thanksgiving dinner with our El Tuito friends, as is our tradition, and a great time was had by all. We’ve been going to the beach, of course (the eventual subject of this post), and enjoying evenings out.

Our ukulele music group, Los Strumbreros, is going strong and increasing in size as people arrive. Our charity event, the Panty Raising Party (underwear for underprivileged kids) at Nacho Daddy, was this week already! The holidays are here. 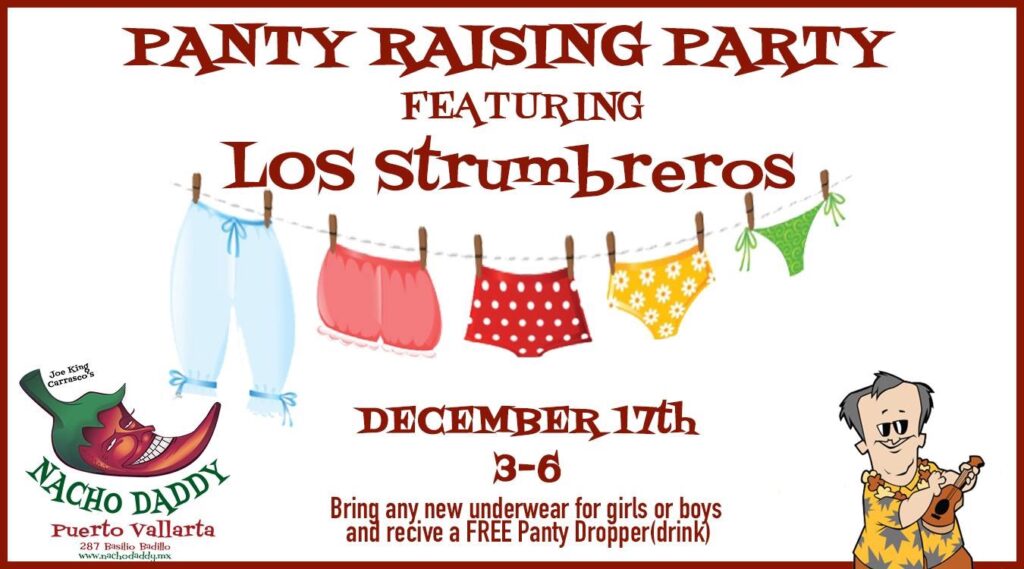 Now, to the photographic subject of this post. Los Muertos Beach, or Beach of the Dead, is not a name that seems overly tourist-friendly. But it is the most famous beach in Puerto Vallarta, and it’s right near our house. Historical sources differ on the origin of the name: it’s either the site of a famous battle with the Indians, it’s where bodies from a shipwreck washed up, etc., but the most likely origin is that there used to be an old cemetery near there.

There are plenty of other beaches in Vallarta, in fact it’s basically one big beach, but Los Muertos is the center of beach tourism for the area. It’s where the first beach restaurants, originally just crude palapas (palm-thatched shelters) started, and the original restaurant/bars are still there, El Dorado and La Palapa. No longer palapas, they are now high-end eateries attached to popular and in-demand condo buildings. The beach is bisected by the famous Los Muertos Pier, now a tourist attraction in itself, and the launching spot for boat tours, sport fishing, and water taxis to more remote parts of Banderas Bay.

And, depending on the hour and day of the week, the beach is crowded! Los Muertos Beach is made up of a series of beach restaurant/bars, each with rows of umbrellas marking their territory. In fact, you can tell when you go from one to the next by the color of the umbrellas and/or the beach furniture. Quite different from our familiar Oregon beaches! 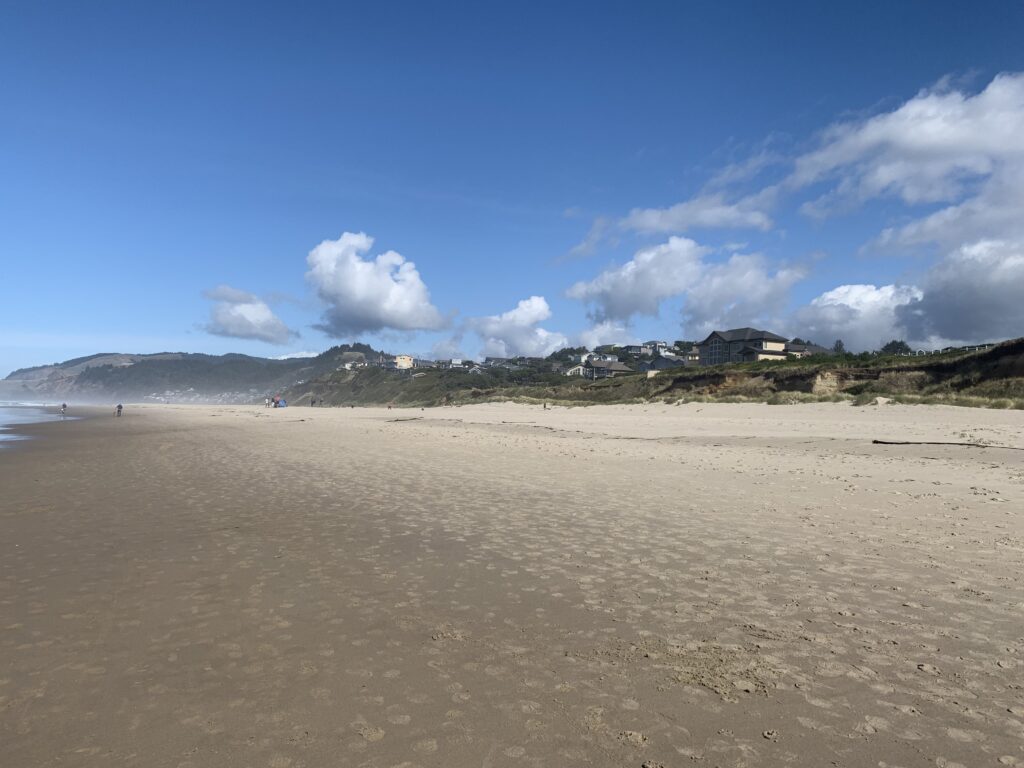 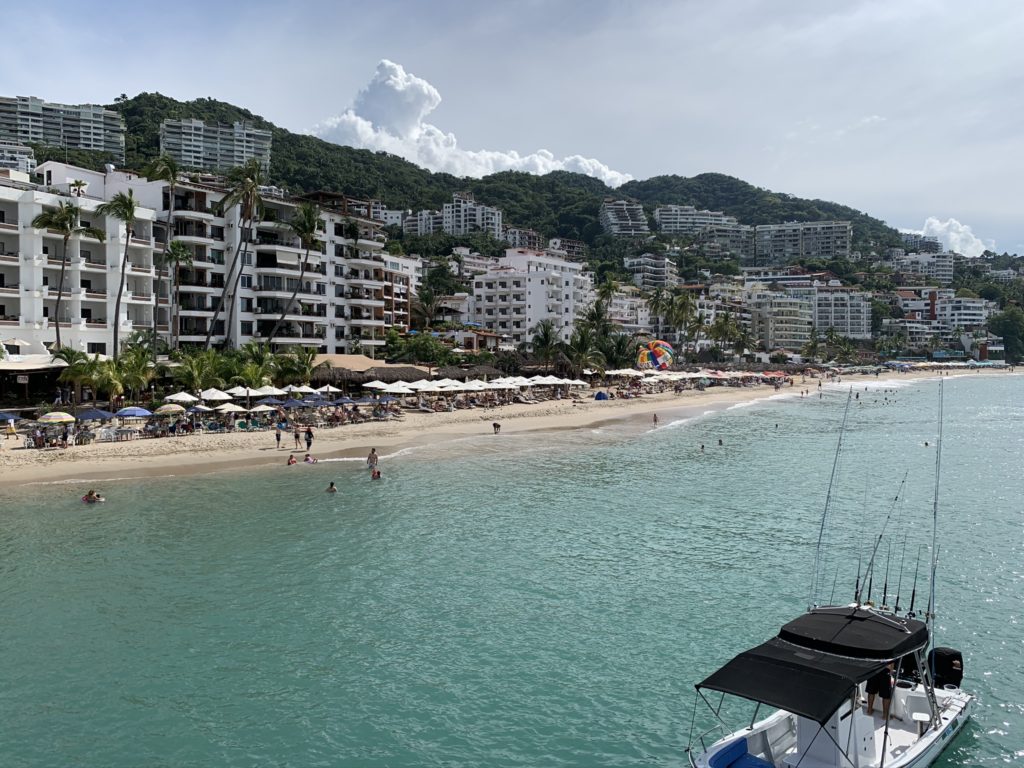 Los Muertos Beach, from the pier. 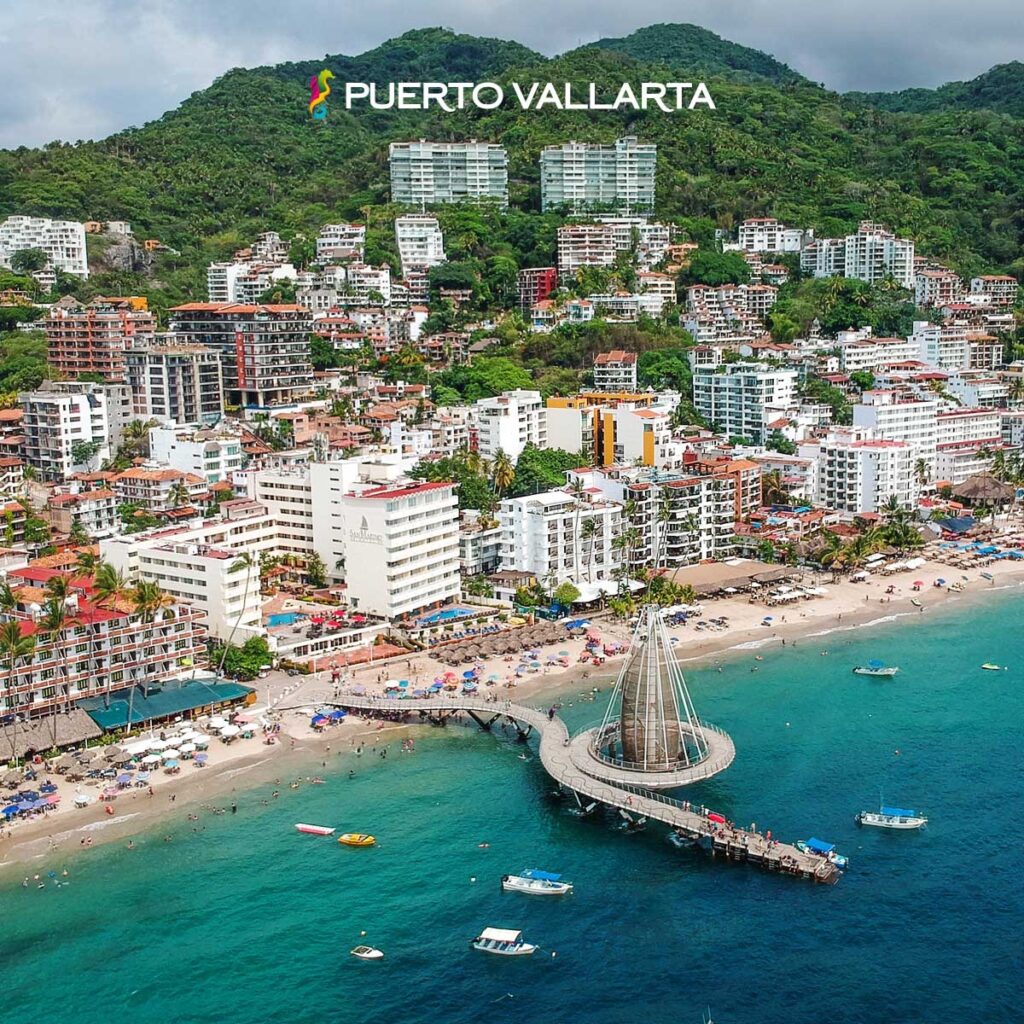 A bird’s-eye view of Los Muertos Pier and beach, courtesy of the Puerto Vallarta tourism folks. The superstructure is meant to look like a sail, and it lights up at night. 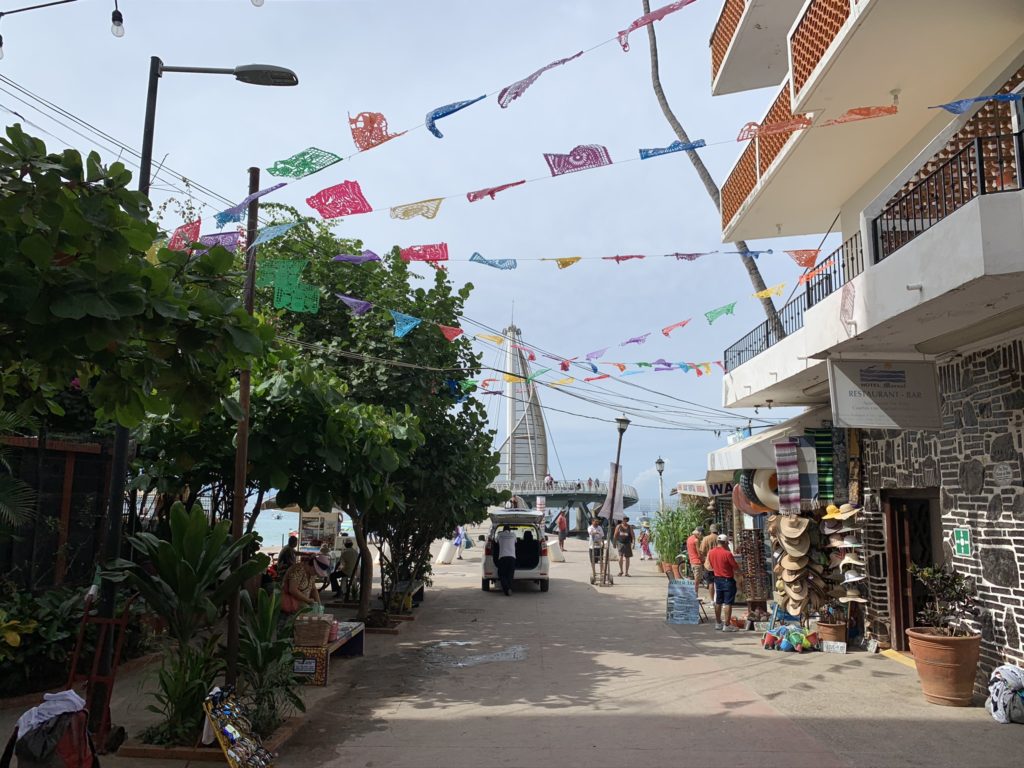 This is the street leading down to the pier and beach. 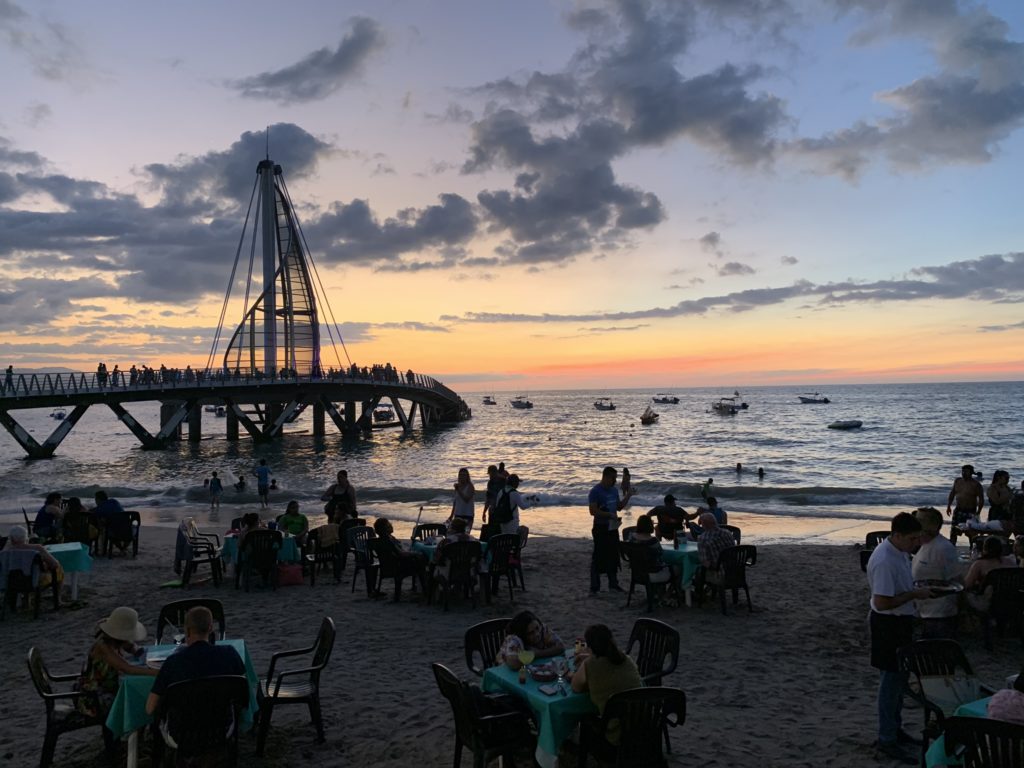 The pier at sunset. 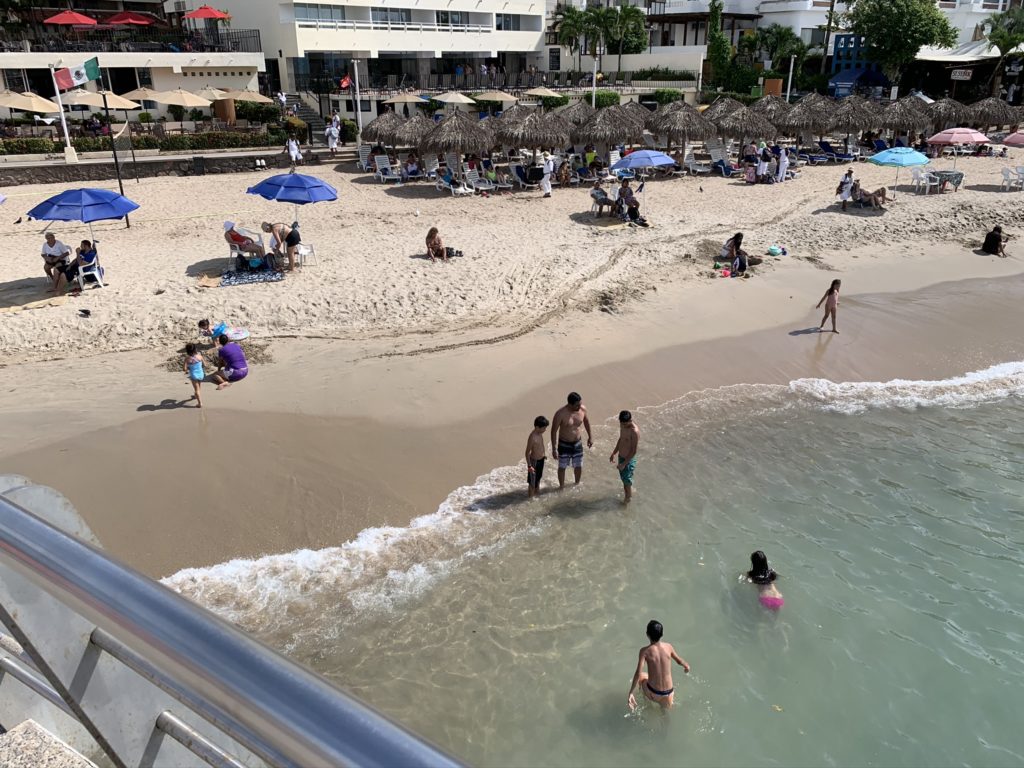 Looking down from the pier. This part of the beach is very calm and shallow and is a good place for kids to play in the water. It’s often filled with families with children. This is a “free” section of beach where people bring their own chairs and umbrellas, so they aren’t tied to a particular restaurant and can bring their own food and drink. 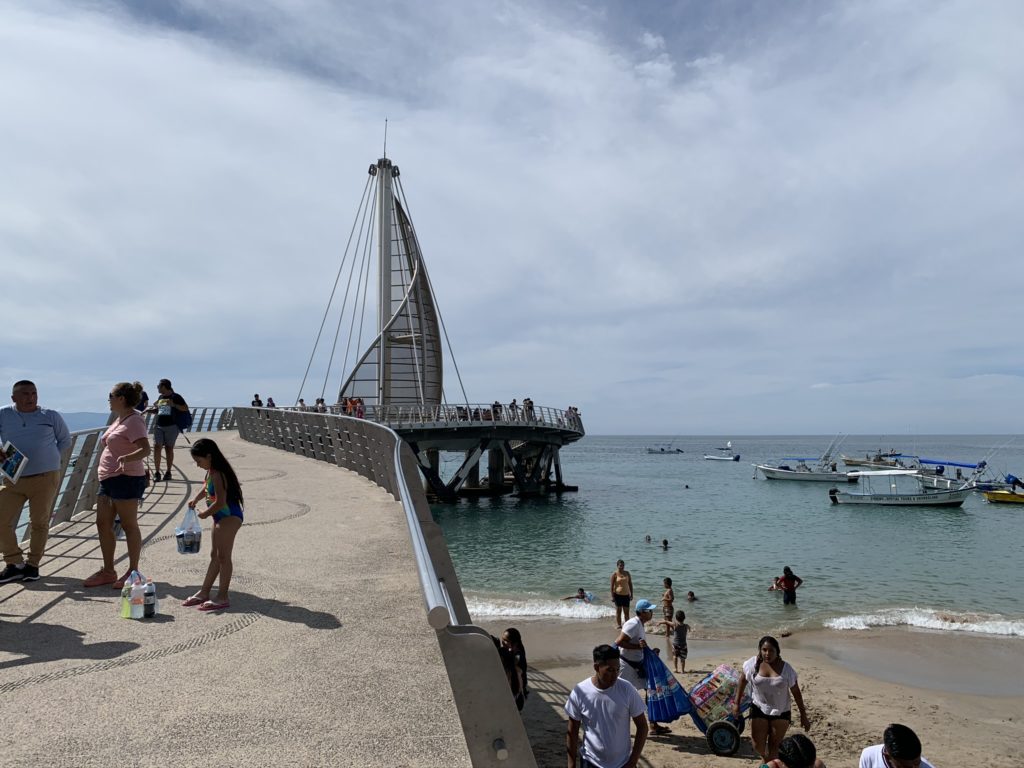 The walkway up to the pier. 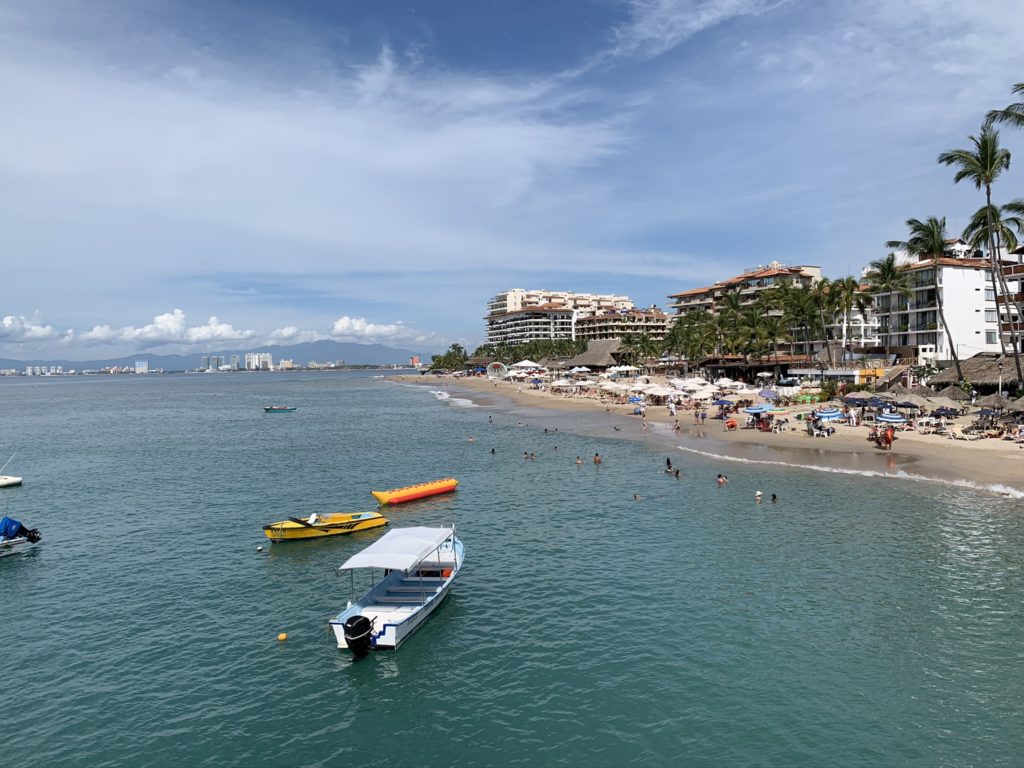 Looking north from the pier. The northern end of Los Muertos is in sight, and that’s the hotel zone in the distance. 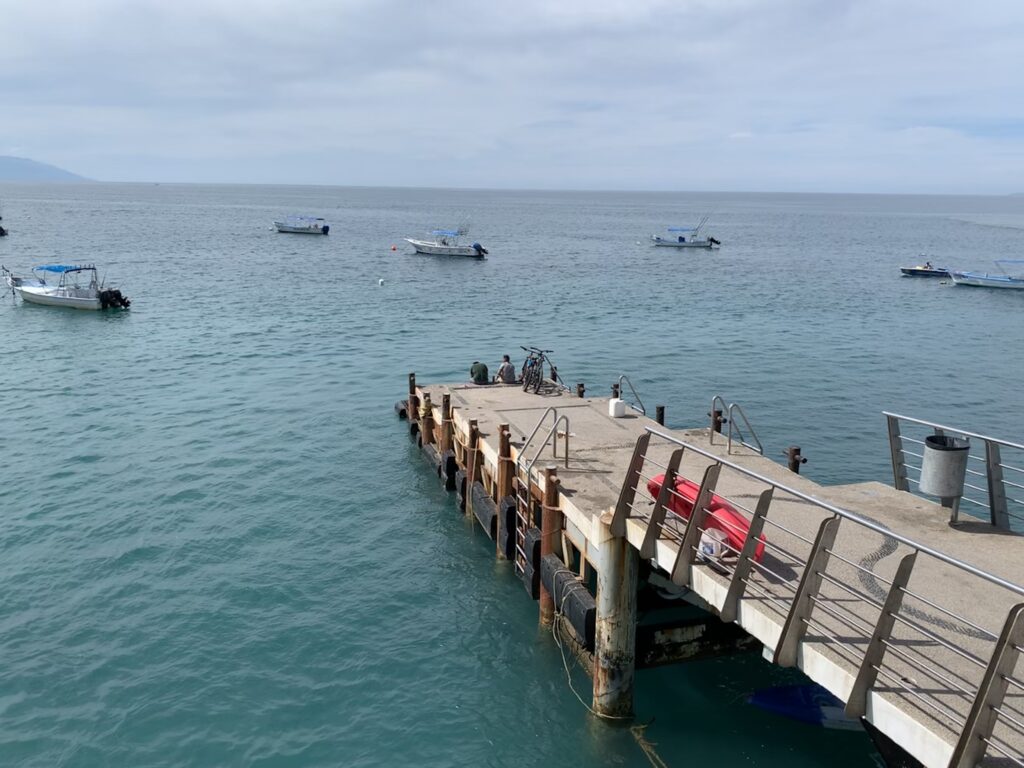 The end of the pier, where boats embark and disembark. 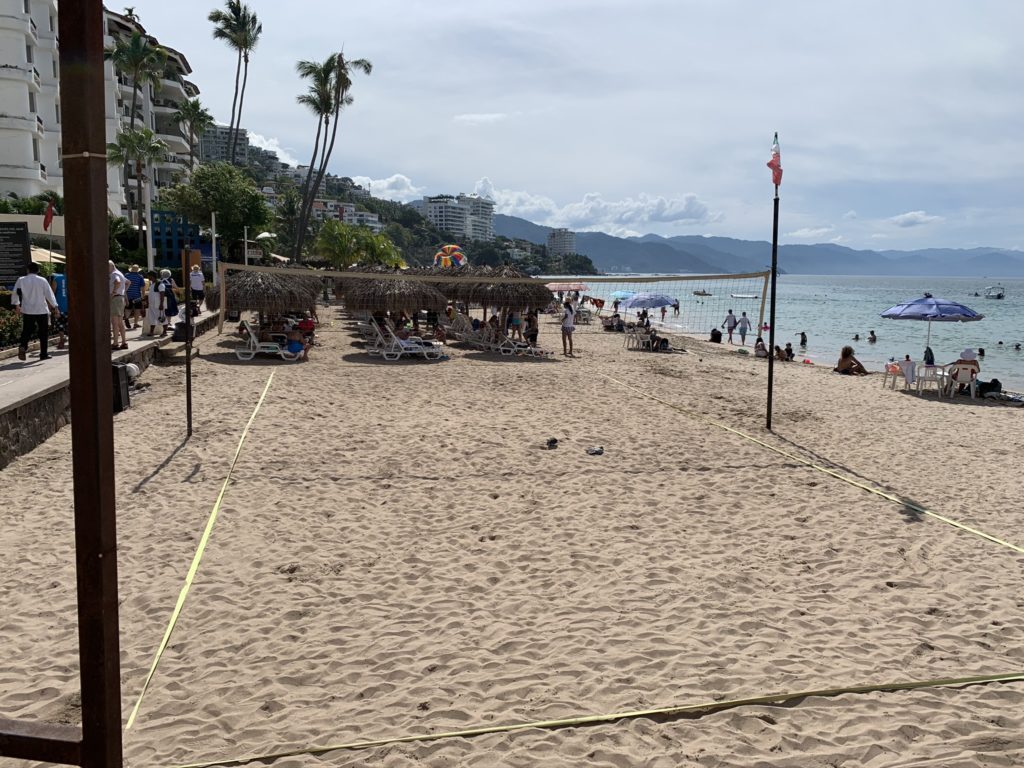 Starting to walk south from the pier, that’s the beach volleyball court. 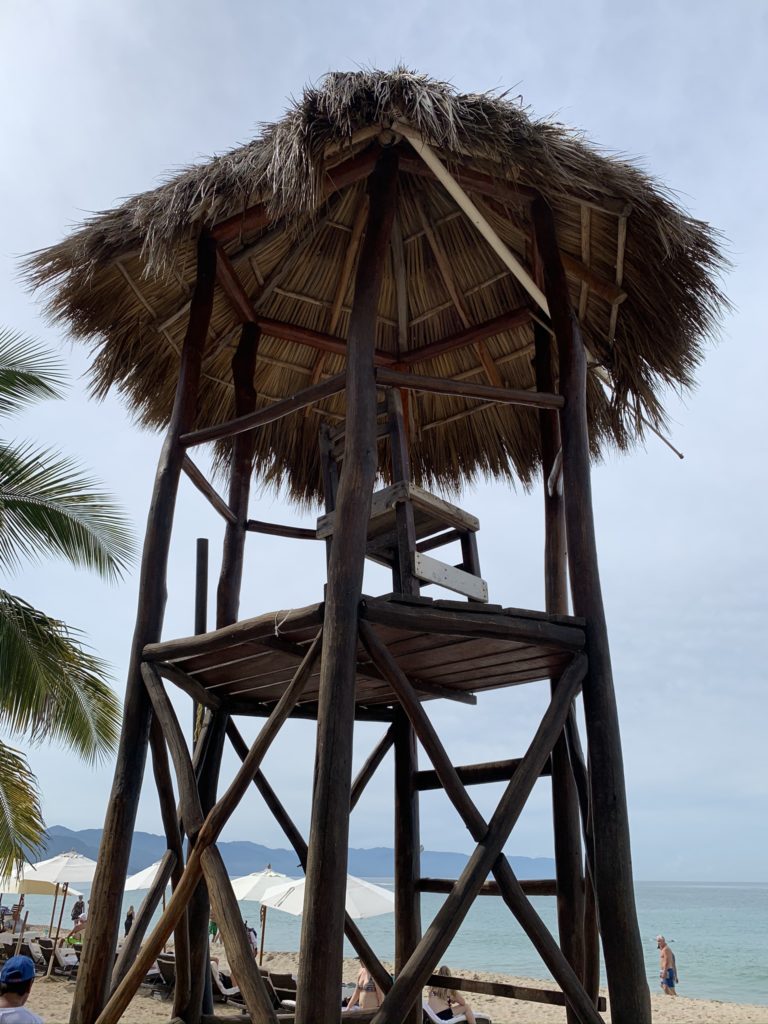 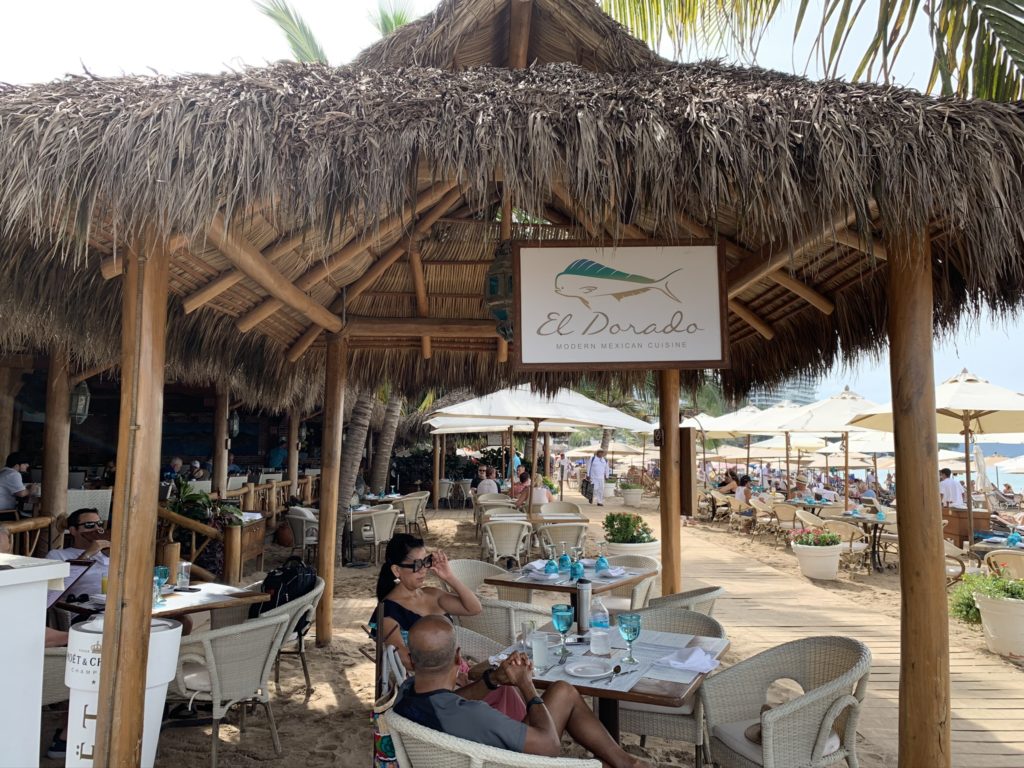 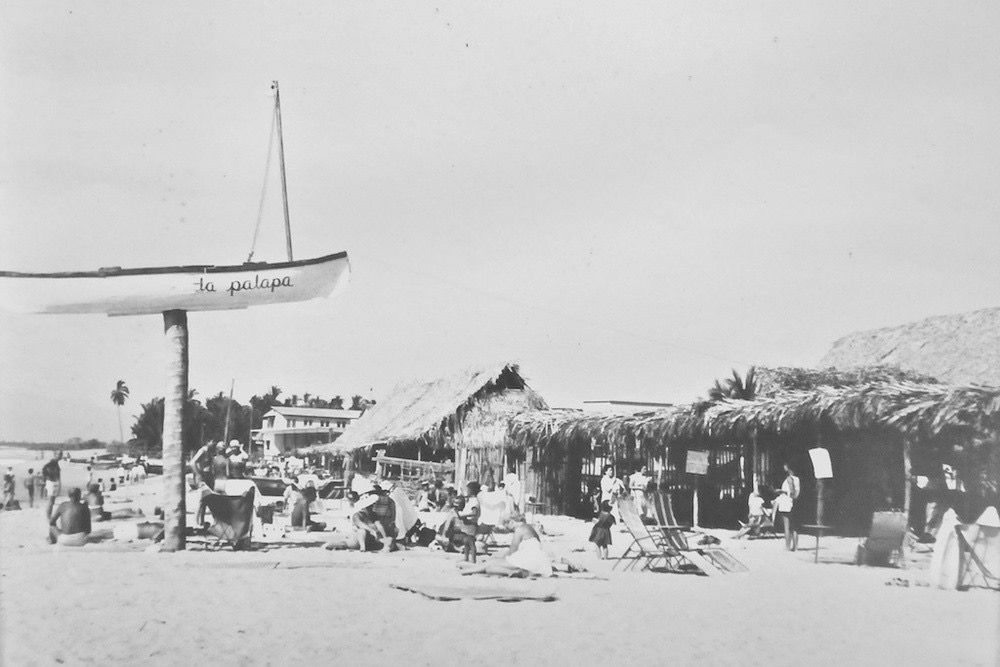 For comparison, I’ve added some historical photos. This was the Los Muertos Beach scene in the ‘60’s. 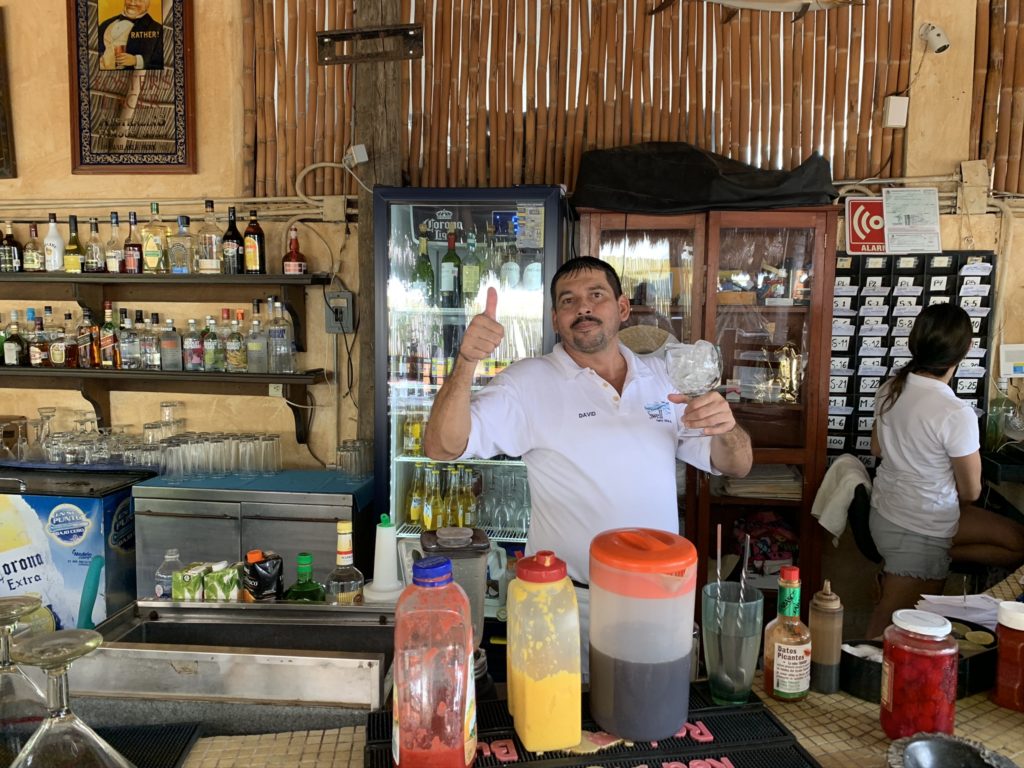 This is David, behind the bar at Swell Beach Bar, where we hang out on the beach. 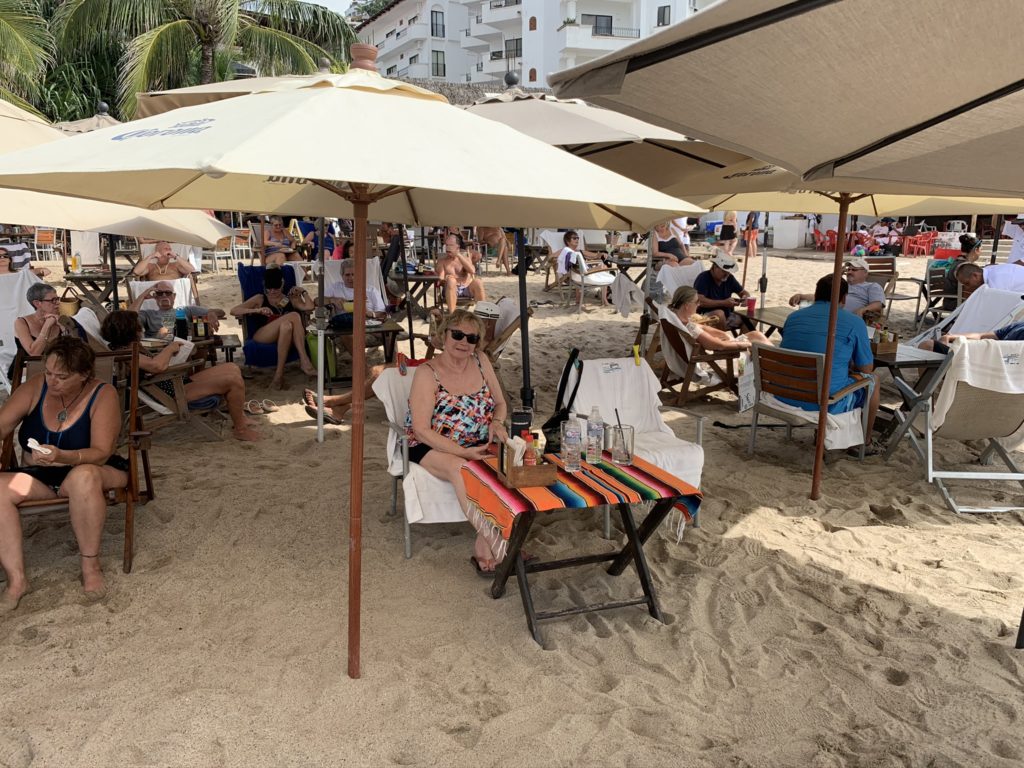 Peggy at our usual spot on the beach. 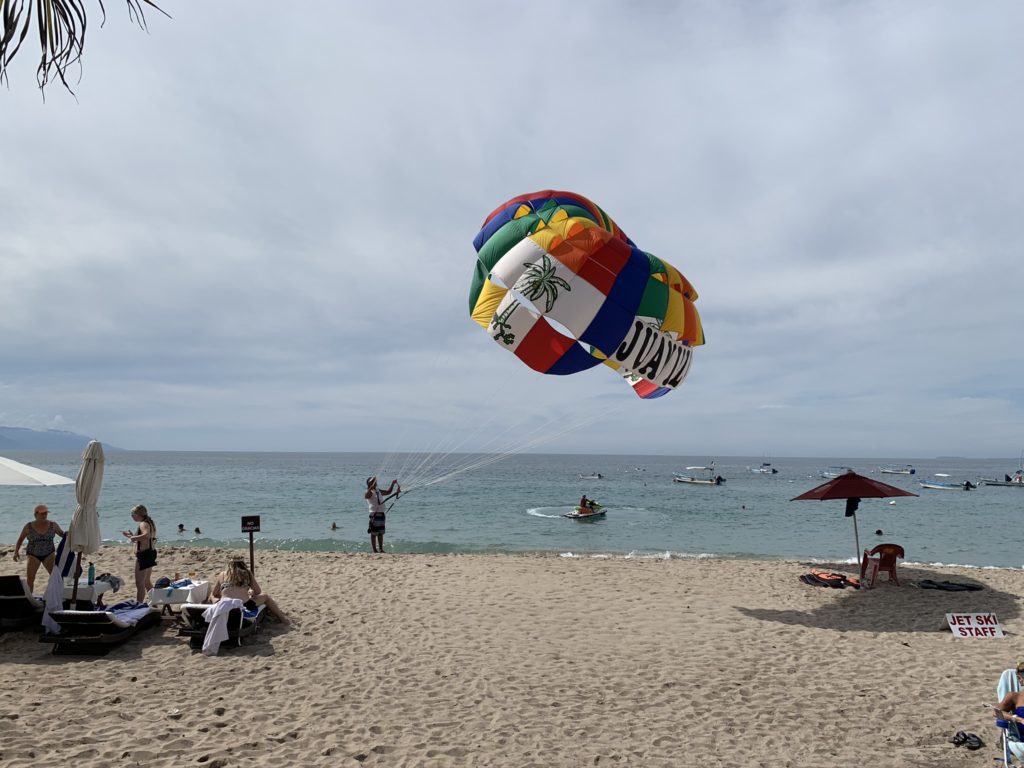 Farther on, we find the parasailing rides. 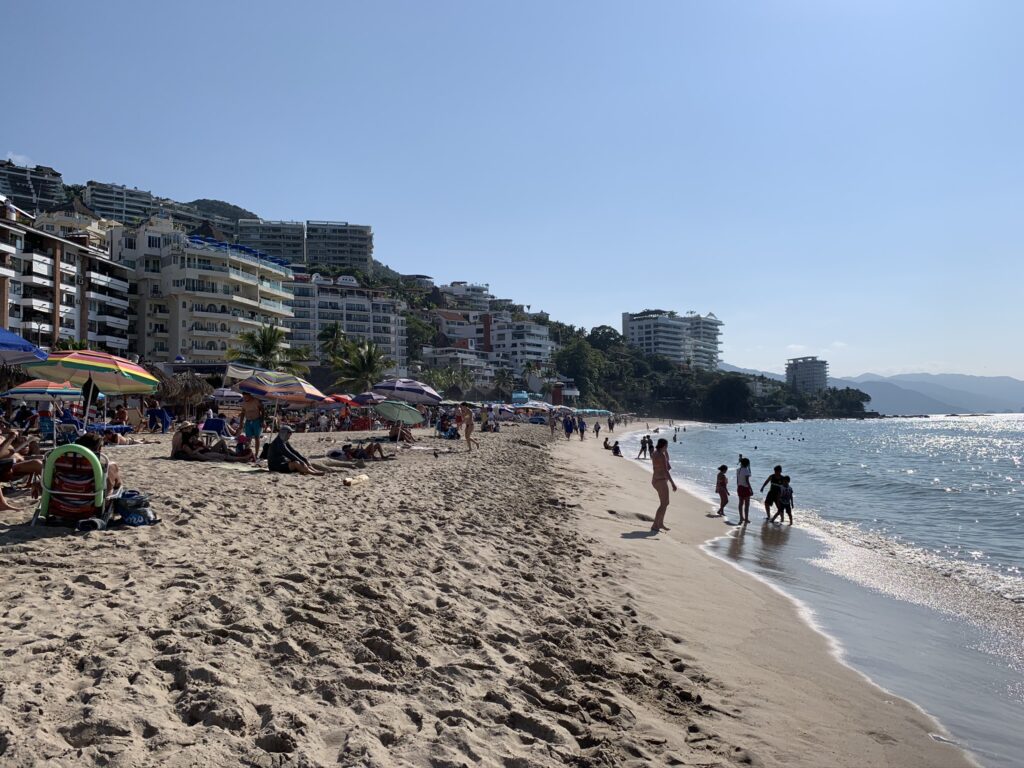 Now we are heading south, toward the end of the beach. 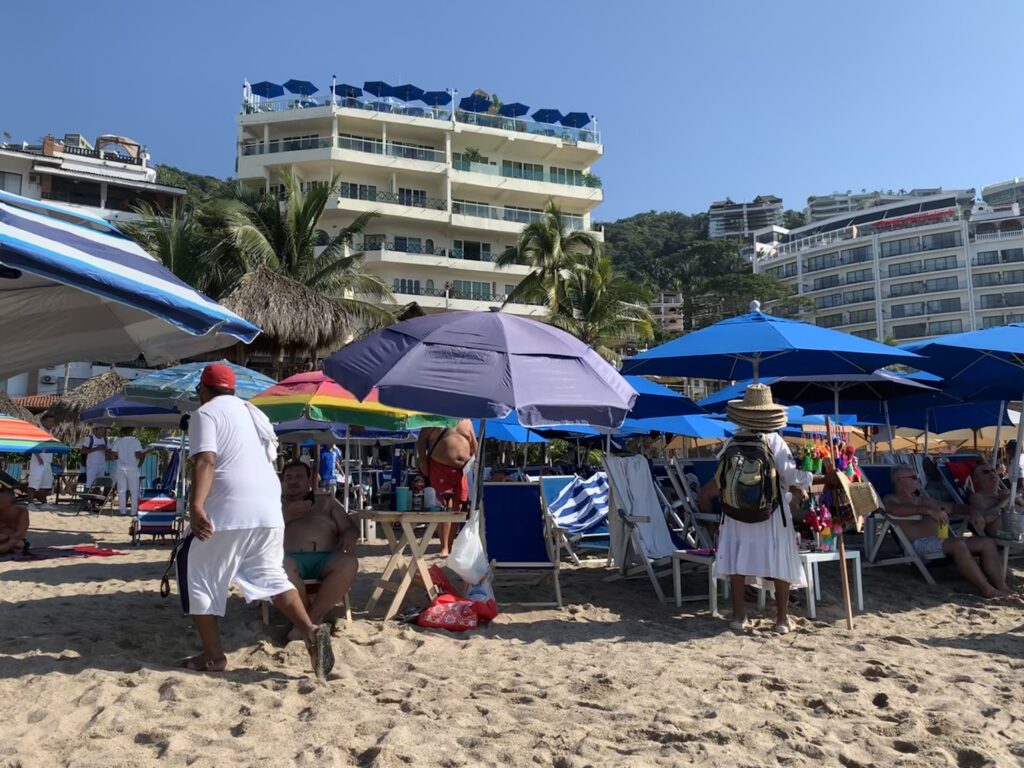 Puerto Vallarta is known as “the San Francisco of Mexico.” Much of the south end of the beach is gay-oriented. This is the famous Blue Chairs. 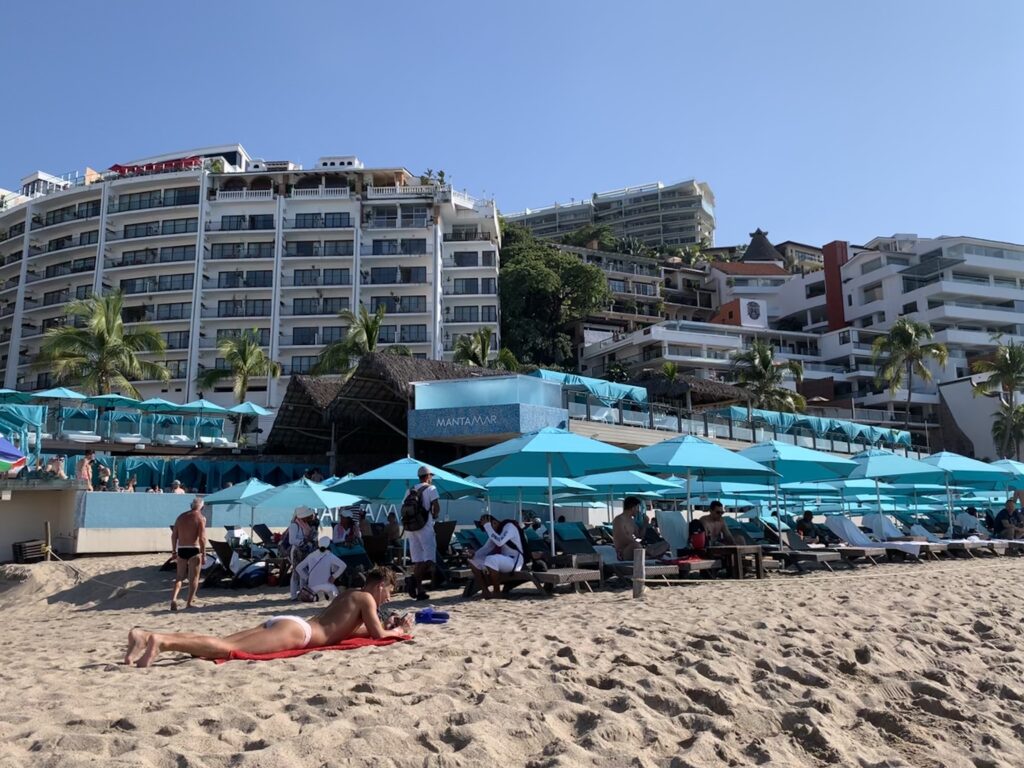 And this is Mantamar, a gay-friendly beach bar and restaurant. 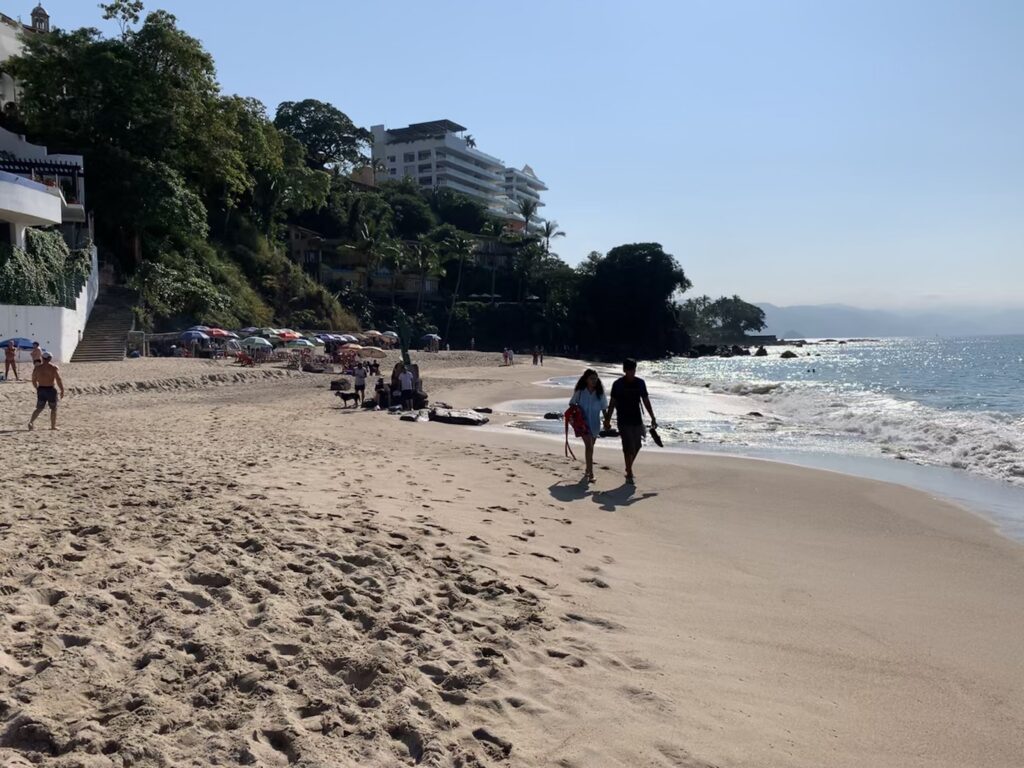 We are nearing the south end of Los Muertos. Right over that couple’s head is El Púlpito, The Pulpit, a large rock, mostly obscured by vegetation, that overlooks the ocean. A path goes over the point here, leading to the next beach, Conchas Chinas. 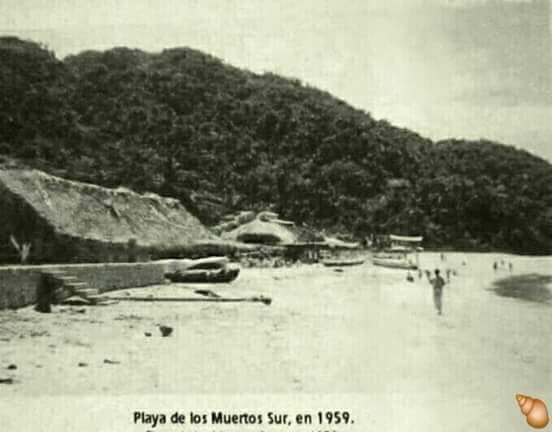 A historical photo taken from about the same place as the picture above. 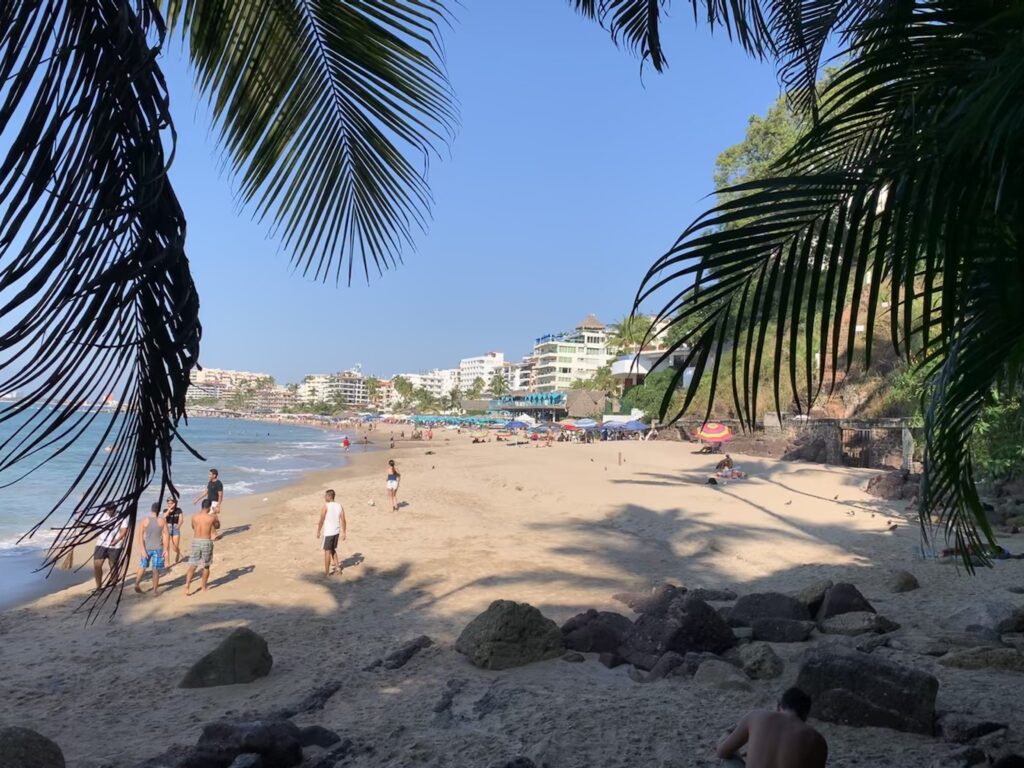 Looking back north from the end of the beach. 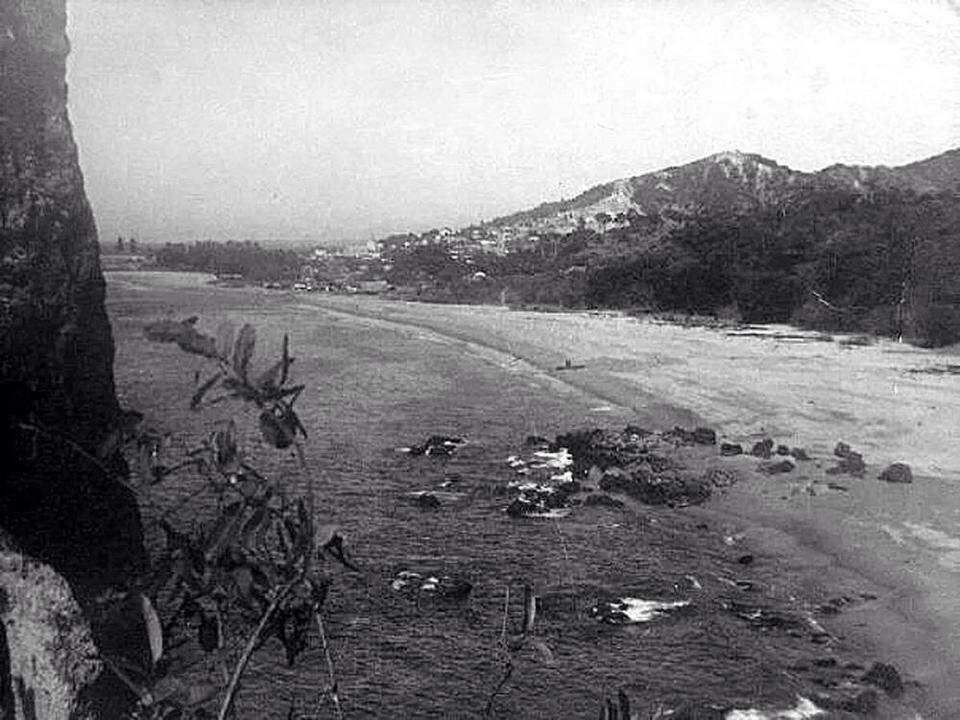 Another historical photo, taken from El Púlpito. I tried taking one from there, but the view was covered by trees and bushes. But it’s from about the same place as the one above. The same rocks are there.

That ends our tour of Los Muertos beach. I hope you enjoyed it as much as we enjoy hanging out there! 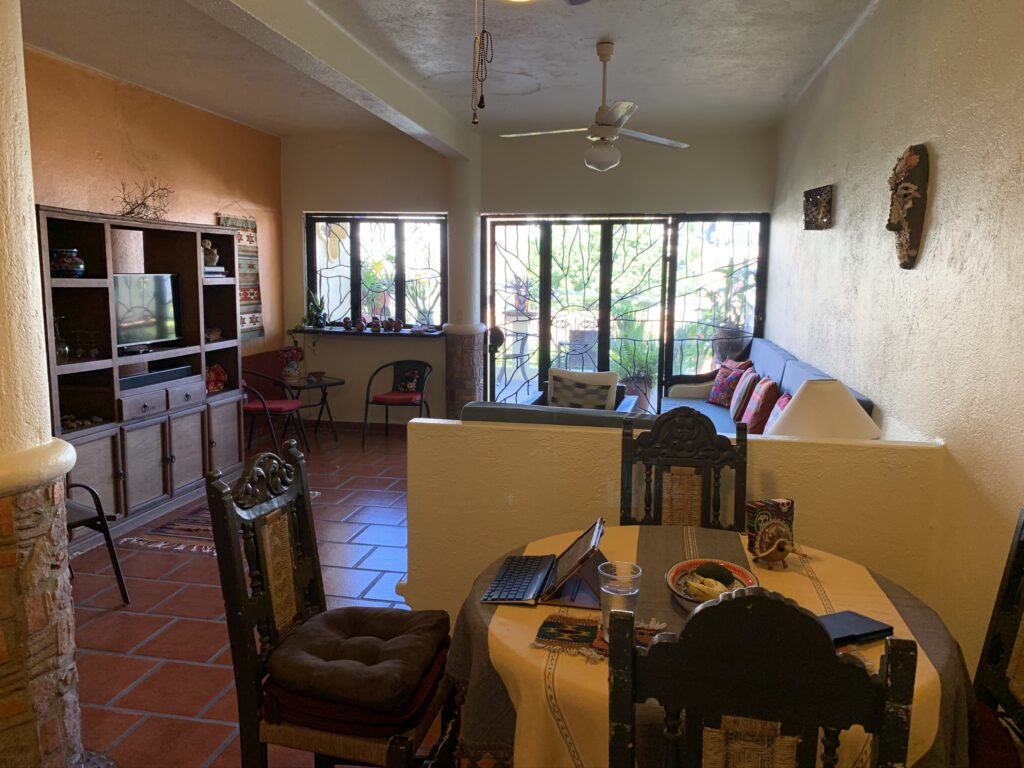 Where I’m sitting to write this.

And finally, a picture of this beautiful “tree” made of poinsettias. Native to Mexico, here they are called flor de la noche buena, or Christmas Eve flower. Wishing you Happy Holidays and an outstanding New Year! OnVallartaTime will return next year! 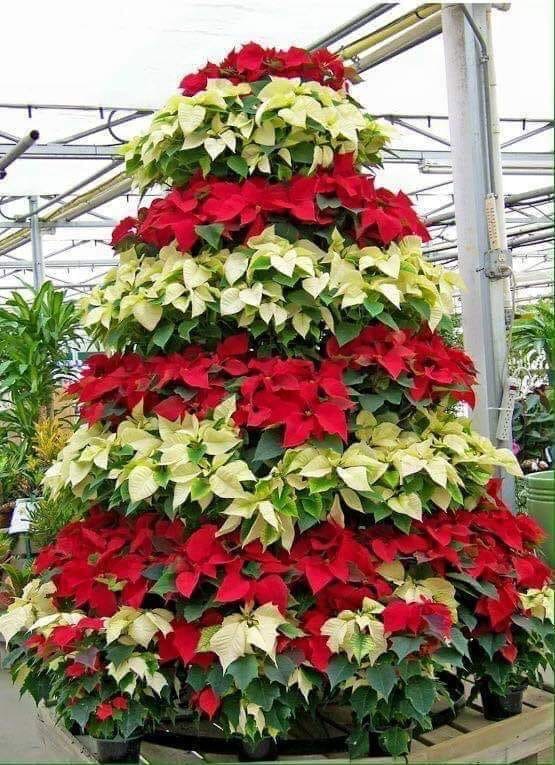