Hola, and welcome, once more, to OnVallartaTime!

I say once more, because this will be the last post for the season. It´s hard to believe, but in a little over two weeks, we´ll be heading home to Oregon! I’m not looking forward to the cold, gray rain, but part of me longs to be home, too. Home to our friends and family, familiar surroundings, and our cozy beach house. Spring is springing on the Oregon coast, with all the flowers and I look forward to lazy times on our deck overlooking the creek.

It’s spring here, too, which means that it’s heating up! The weather is noticeably more hot and humid. The nights are still relatively cool, but by the time we walk home from the beach we re dripping wet, and take refuge under the ceiling fans with a tall glass of ice water. So I guess the weather is telling us it’s time for these birds to be migrating north.

Many of our American and Canadian friends have already left. This past week there’s been an obvious drop in pedestrian traffic. The beach is starting to feel a bit empty. But not so fast, because this week is also the beginning of Semana Santa, Holy Week, and the town is on the verge of filling up with Mexican national tourists. It’s vacation time all over Mexico, and Puerto Vallarta is a major destination. Hotel ocupancy is projected to be 95%. Every bit of vacant sand on the beach will be covered with portable beach chairs, blankets, coolers and umbrellas. It’s party time!

Meanwhile, we plan to take advantage of the time we have left. We have some farewell happy hours and dinners with friends in the works, to say so long until next year. We continue to go to the beach to hang out. Jam sessions of Los Strumbreros continue. It’s going to be a good couple of weeks!

Here are some pictures of what has been happening.

Yes, Semana Santa is off to a roaring start! Taken yesterday on Palm Sunday. 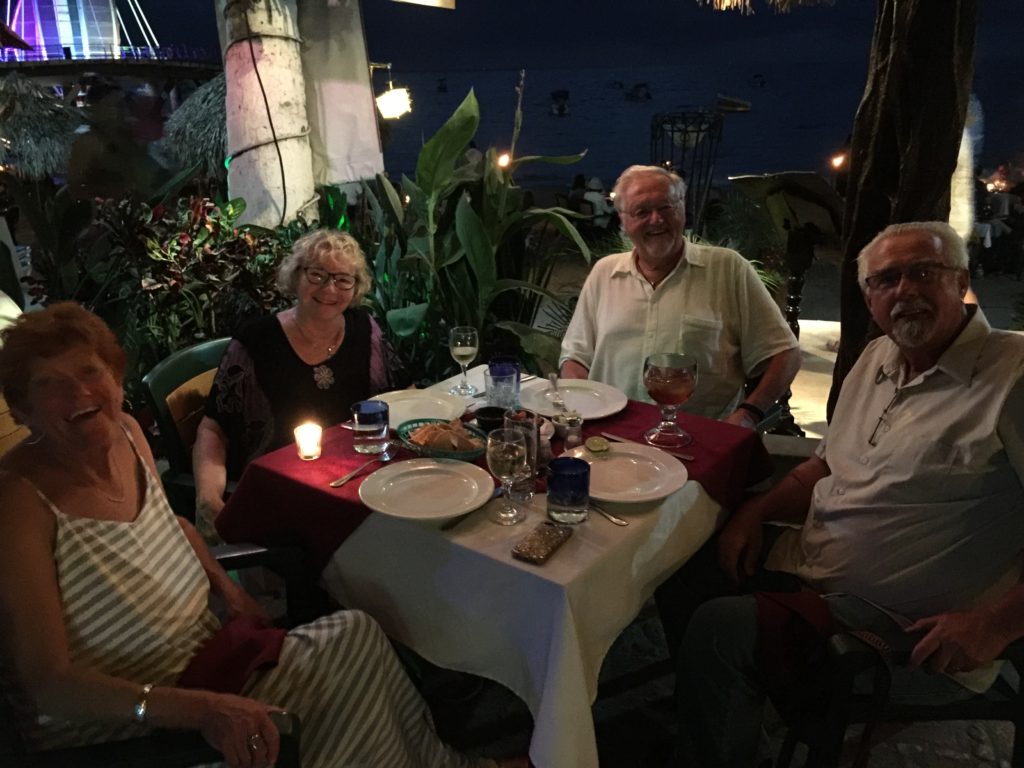 Sister and brother-in-law Laurie and Bob Collupy visited for two weeks from Colorado. Here we are out for dinner at Langostinos on the beach. 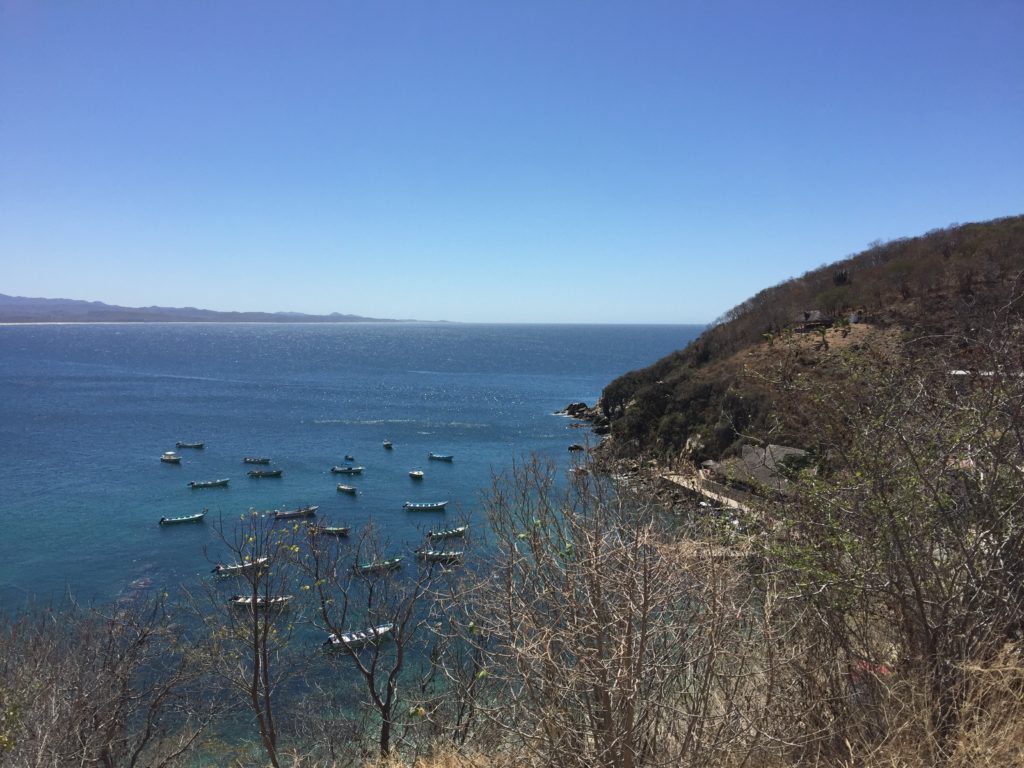 We took a side trip to the beach town of Mayto with Laurie and Bob and two other couples, Jo-Anne and Bob Jackson and Kris and Rich Connoy. This is a shot overlooking the town of Tehuamixtle (popularly known as Tehua) on the way, where we had lunch. 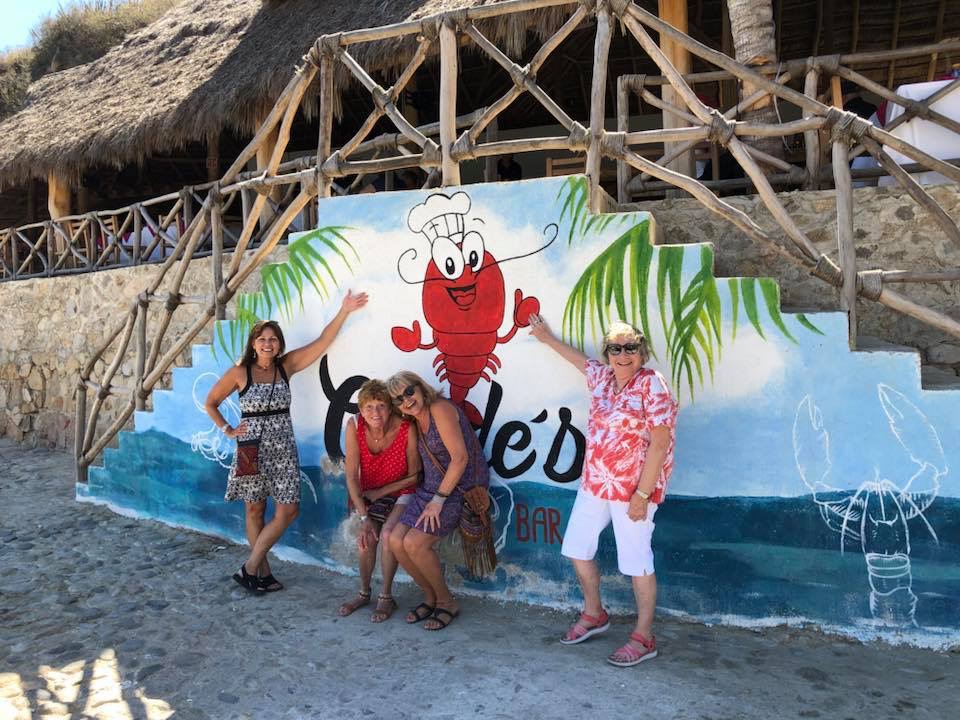 Our lunch spot in Tehua, With Kris, Laurie, Jo-Anne, and Peggy. 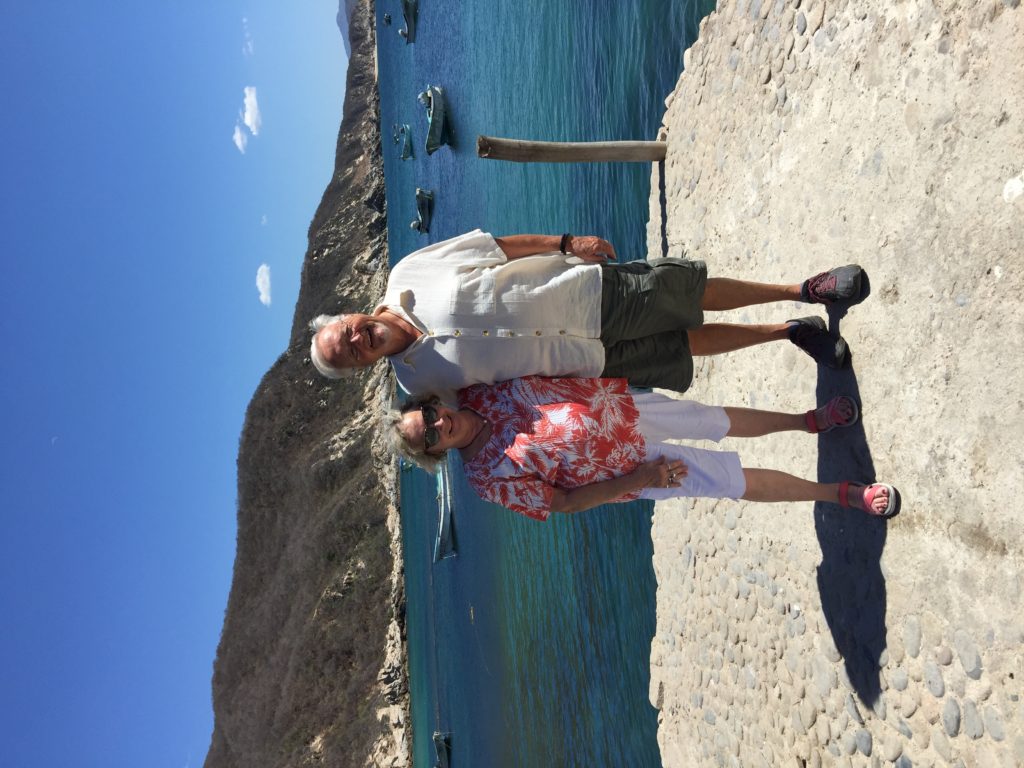 Peggy and I on the pier in Tehua. 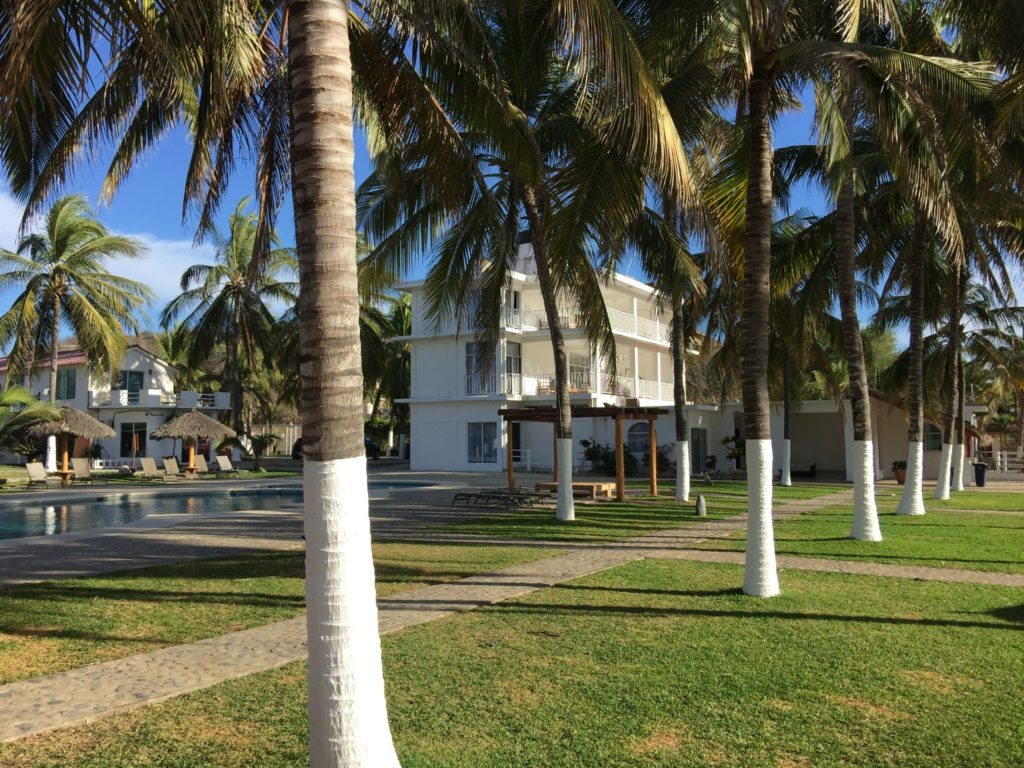 The grounds of Hotel Mayto. 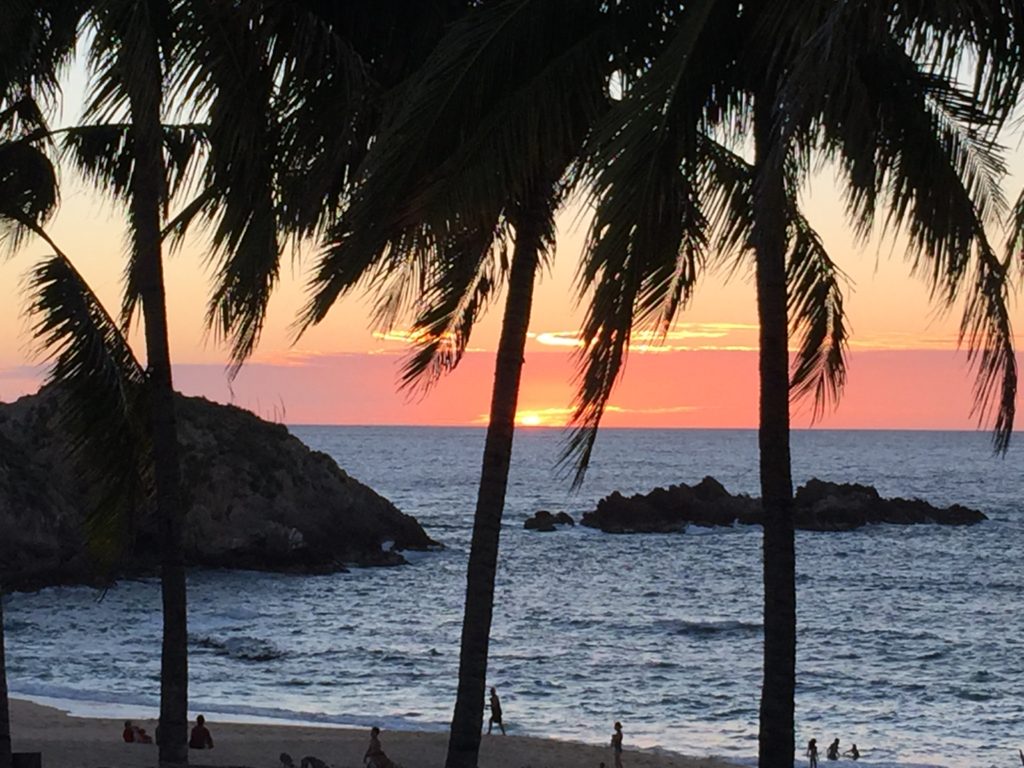 Sunset from our balcony in Mayto. 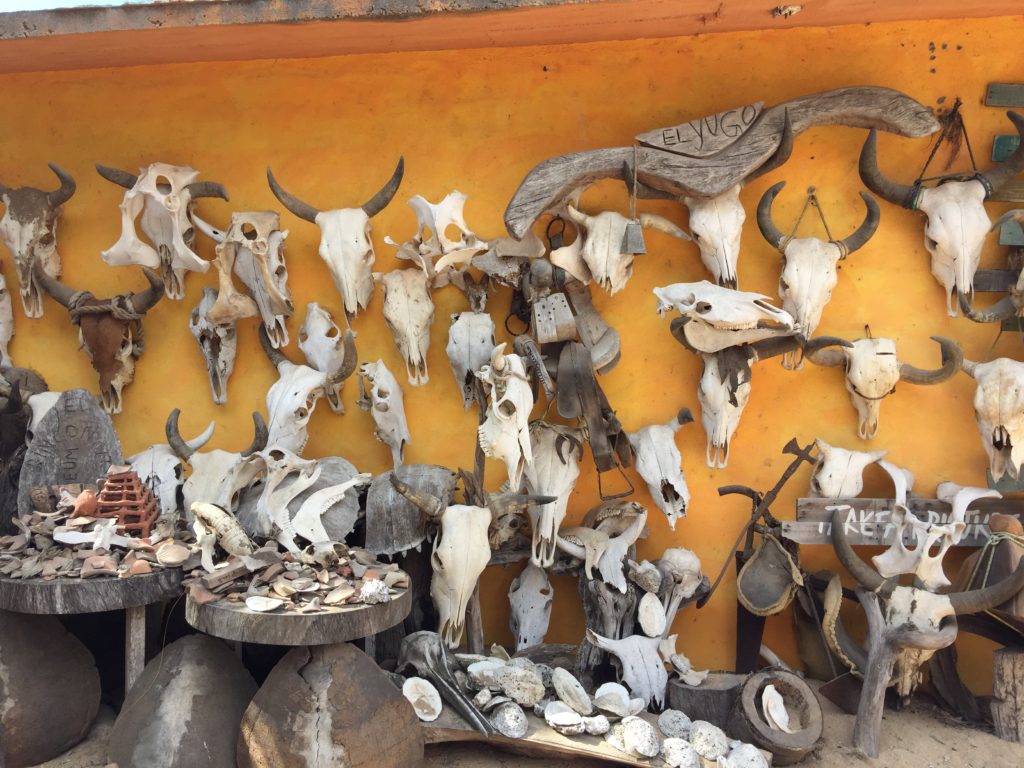 Decorations on the wall at the neighboring Hotel Rinconcito. 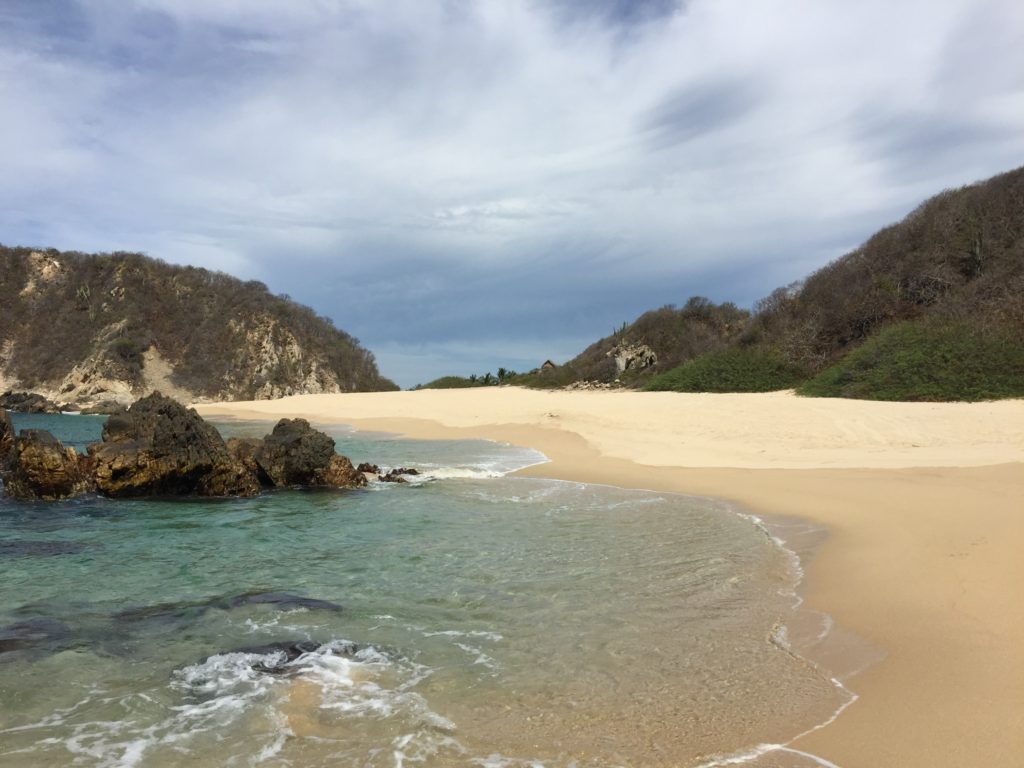 Lovers Beach, a deserted spot near the hotel in Mayto.

When in Mayto, we were able to attend a turtle release. There is a turtle camp within walking distance of our hotel, staffed by biologists who collect the turtle eggs to protect them from poachers and predators. They incubate the eggs in an enclosure and release them once they hatch. We each got one to release. These were Olive Ridley turtles, the most numerous of five sea turtle species native to Mexico. 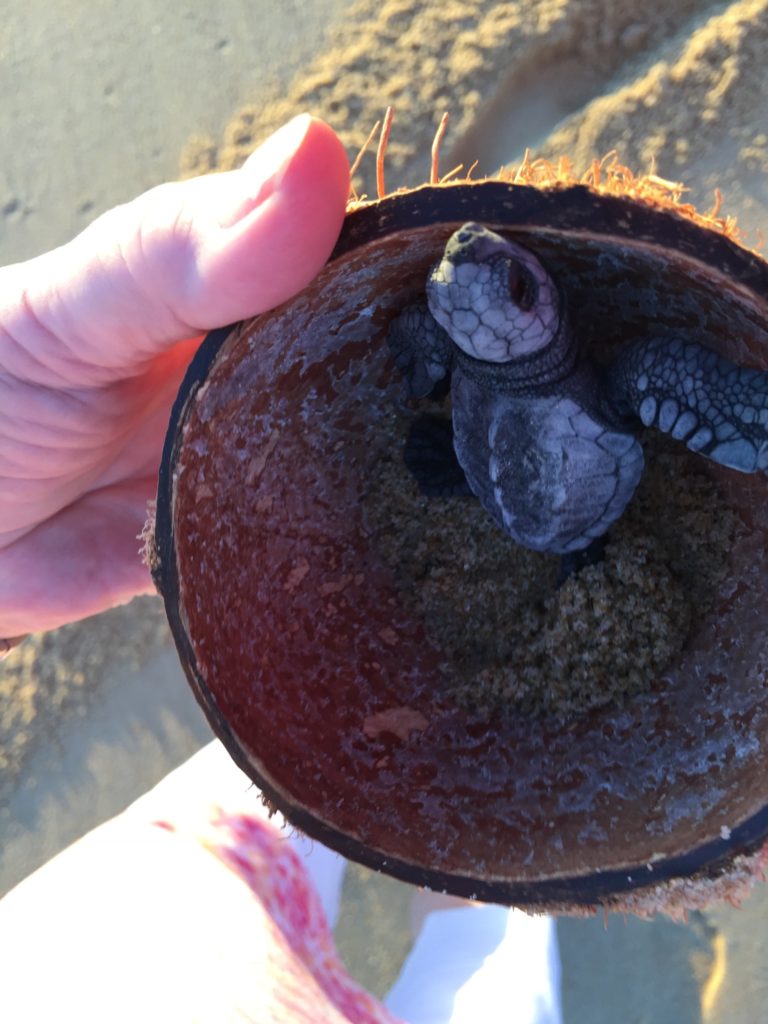 This was my little guy, in a coconut shell to avoid being touched. There is a bit of sand in the shell so she (or he) will be able to find her way back to the same beach in 12-15 years to lay her eggs. If it’s a he, he will just swim around out there for his 80-year lifespan. 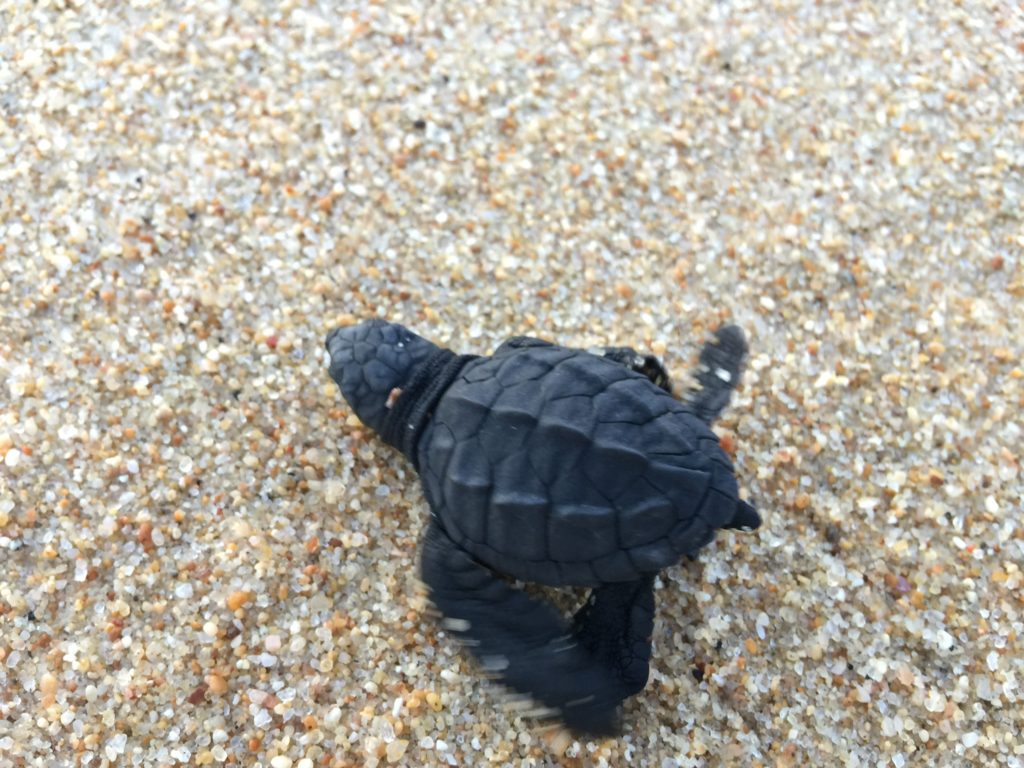 On the sand and ready to head for the surf. 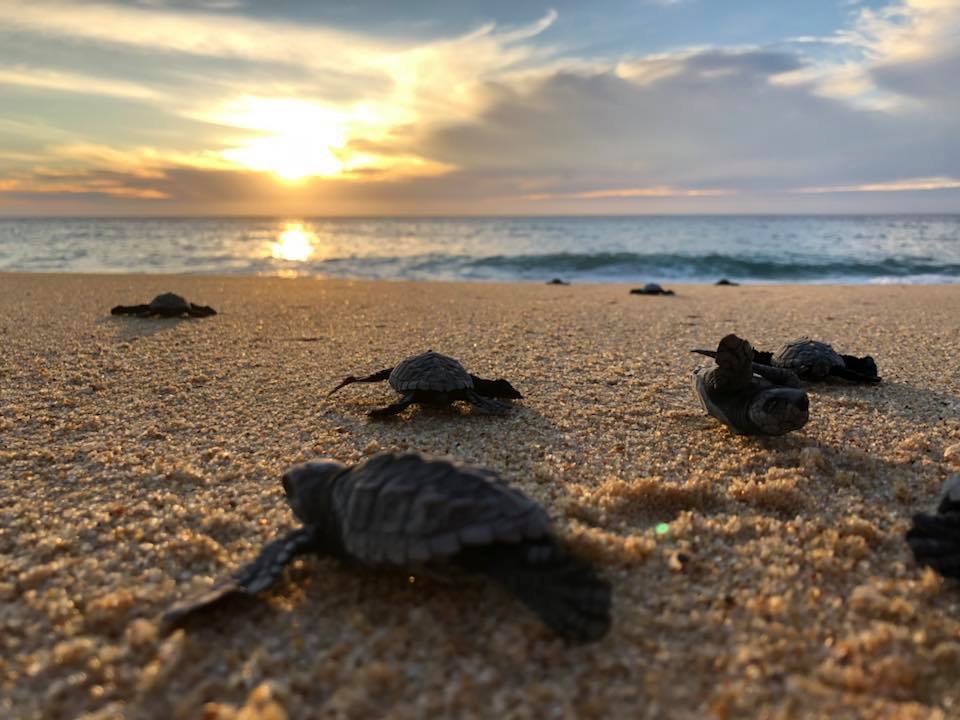 There they go! Releases are at twilight to avoid predatory seabirds.It was an amazing experience! 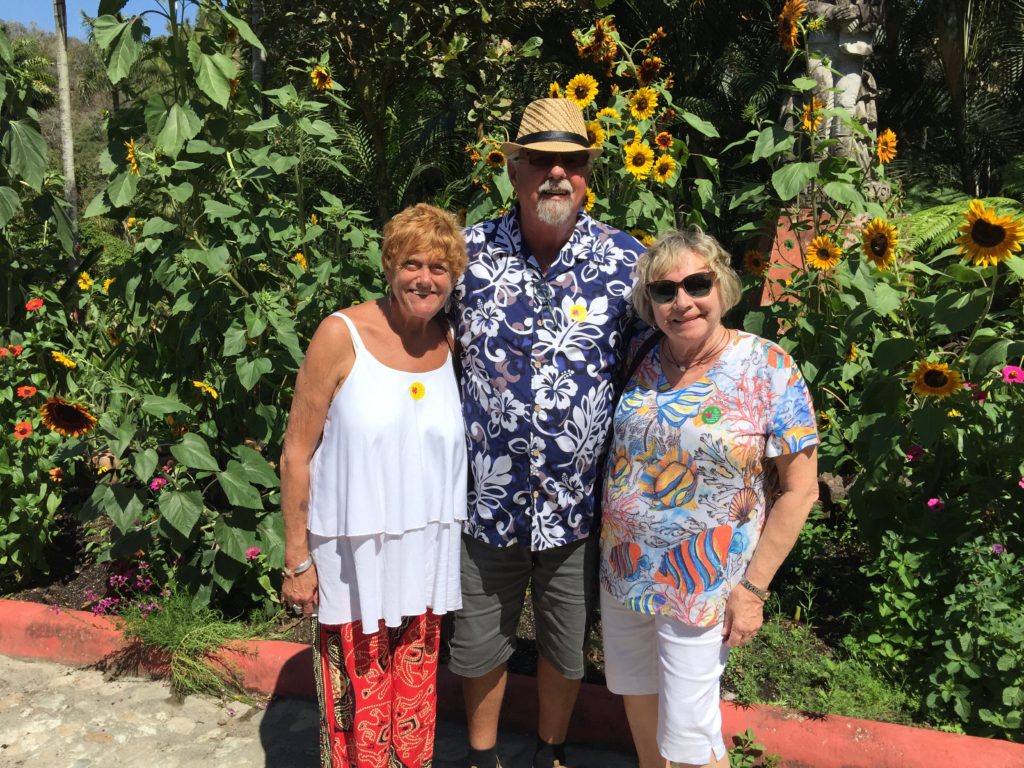 Laurie, Bob and Peggy at the Vallarta Botanical Garden. 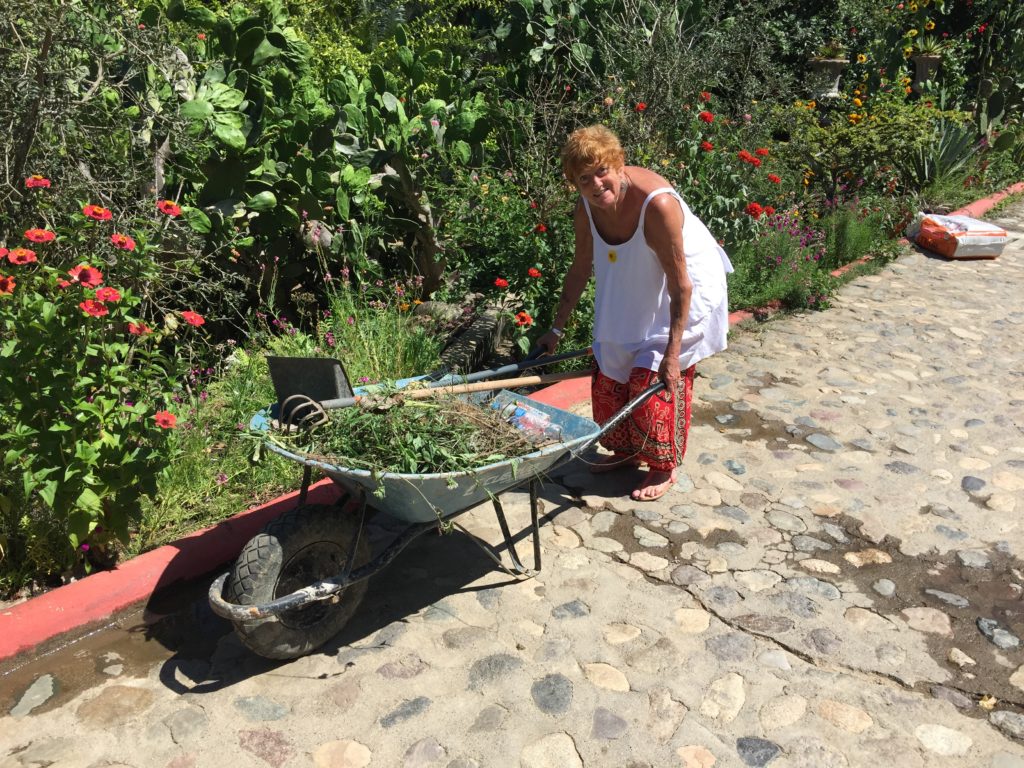 OK, where do you want me to dump this load? 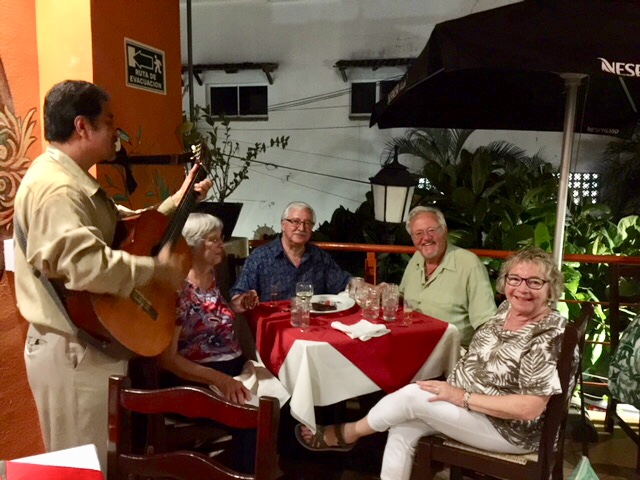 Other visitors were Ethan and Carol Shapiro from New Jersey. They have been coming to Vallarta for a long time, and I have known Ethan since 1970. 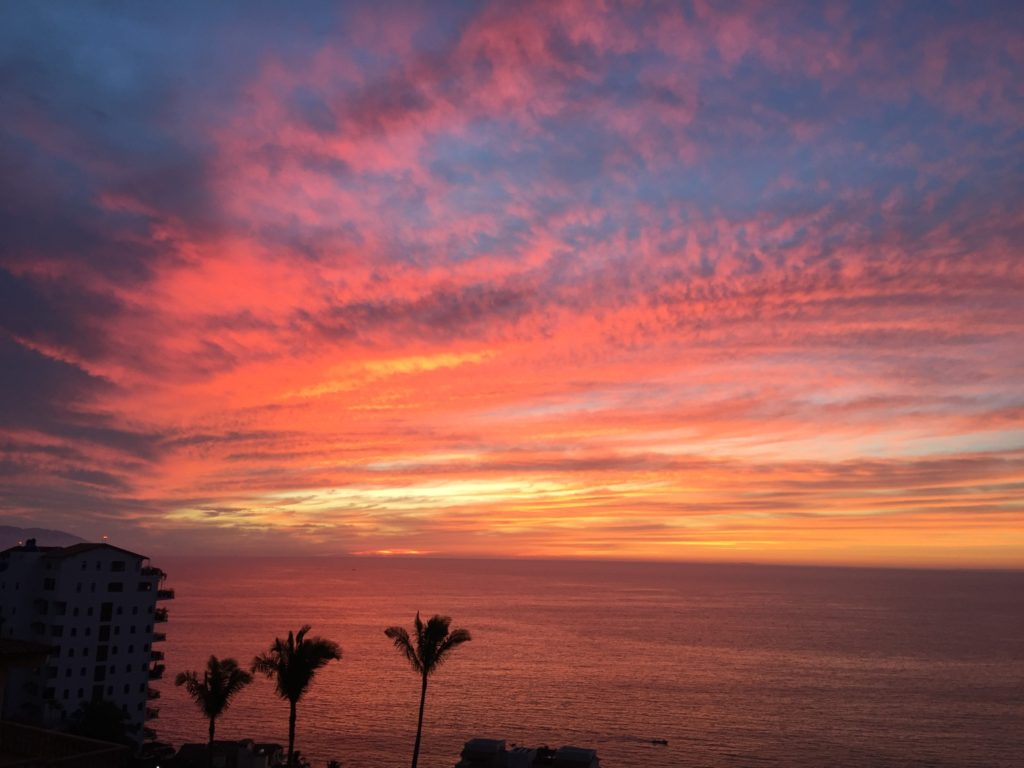 One of the best sunsets ever, from the balcony of Ethan and Carol’s condo in Conchas Chinas, an upscale neighborhood just south of us. 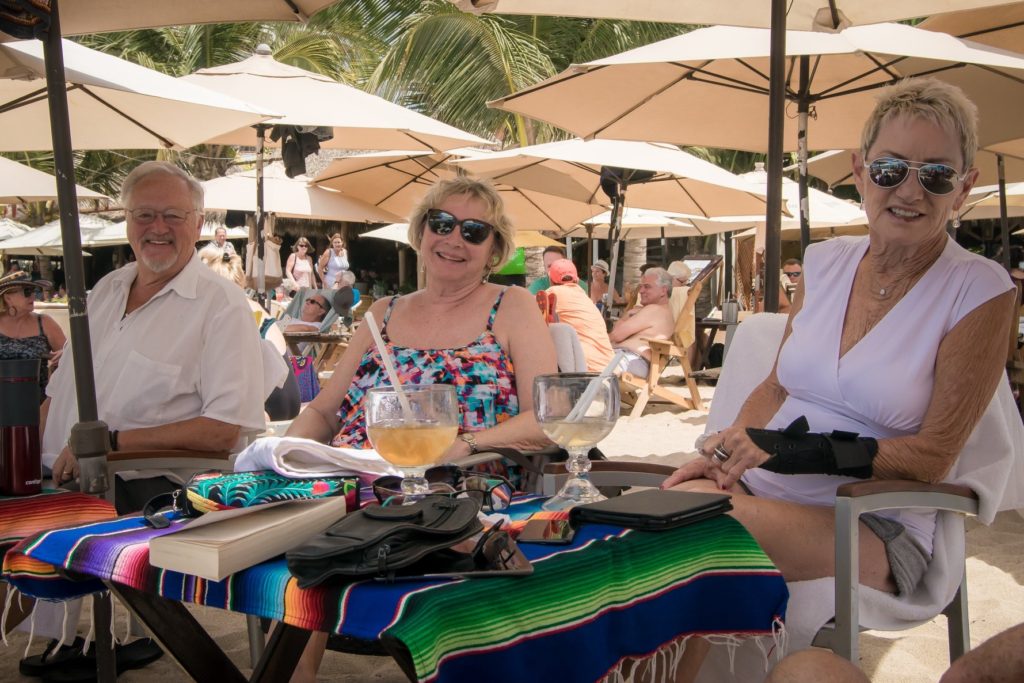 Here we are at the beach with our friend Bonnie Scott.

And finally, a couple of good ones from the “Only In Mexico” file: 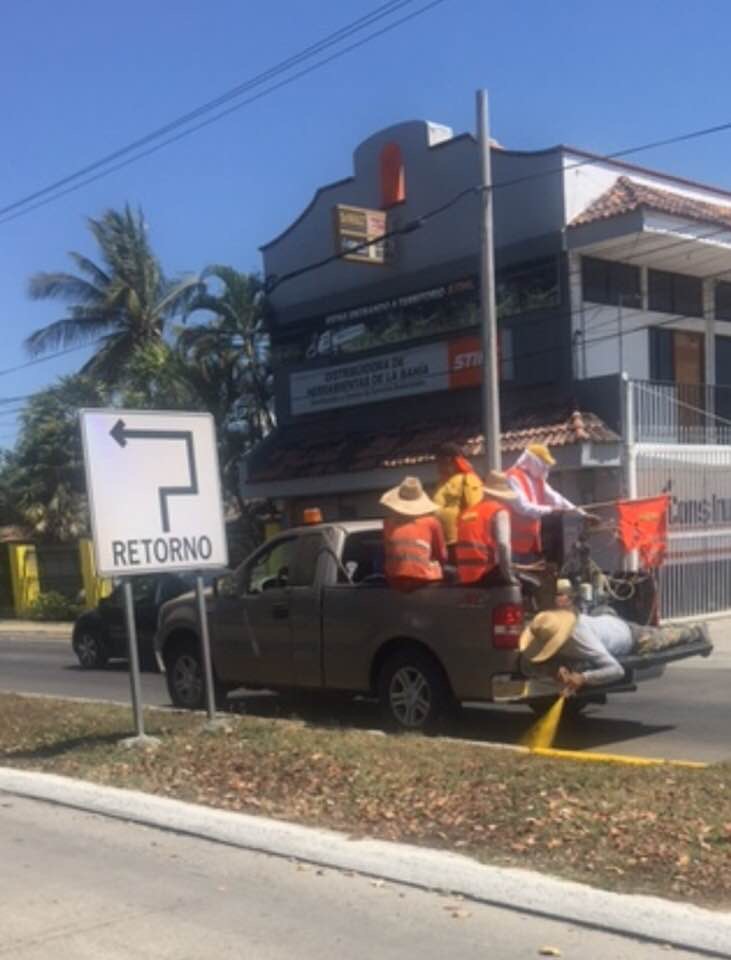 Painting the curbs in Puerto Vallarta! 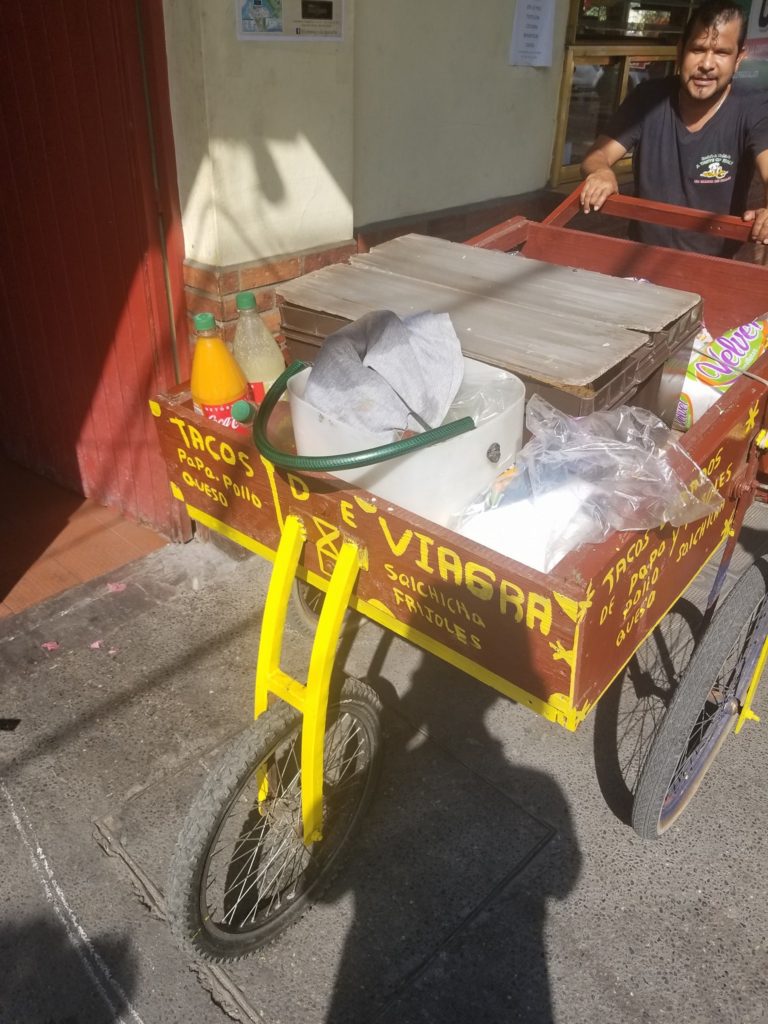 So that’s it for this edition of OnVallartaTime, the last one for this season. To all our Puerto Vallarta friends, God willing we will see you next year! And to our US and Oregon friends, we will see you soon!