The title of this post refers to high season here in the tourist destination city of Puerto Vallarta. Officially, ¨high season¨extends from December through March, but since the last post way back near the beginning of February, it has been the highest of high season. The last part of January and all of the month of February are the height of tourist season here. The streets, restaurants and the beach are the most crowded .

The temperature has been perfect, with highs in the low 80´s and lows in the high 60´s. It´s the most expensive time for rentals, with hardly any availability, and most of the condo associations hold their annual meetings in February because it´s the month the owners are most likely to be in town.

For us, high season has a special significance. Having hung out at Swell Beach Club for a few years now, we have made lots of friends who do the same, and the months of January and February are when most of them are in town. So we have been logging lots of beach time enjoying everyone´s company and getting caught up on our lives. It´s a joy seeing everybody.

Besides all the visits from friends, February was extra special this year because my sister, Laura, and her husband Bob Collupy came for a visit. And to start out the month, we took a side trip to Mayto and Tehuamixtle, adjacent towns on the beach to the south. 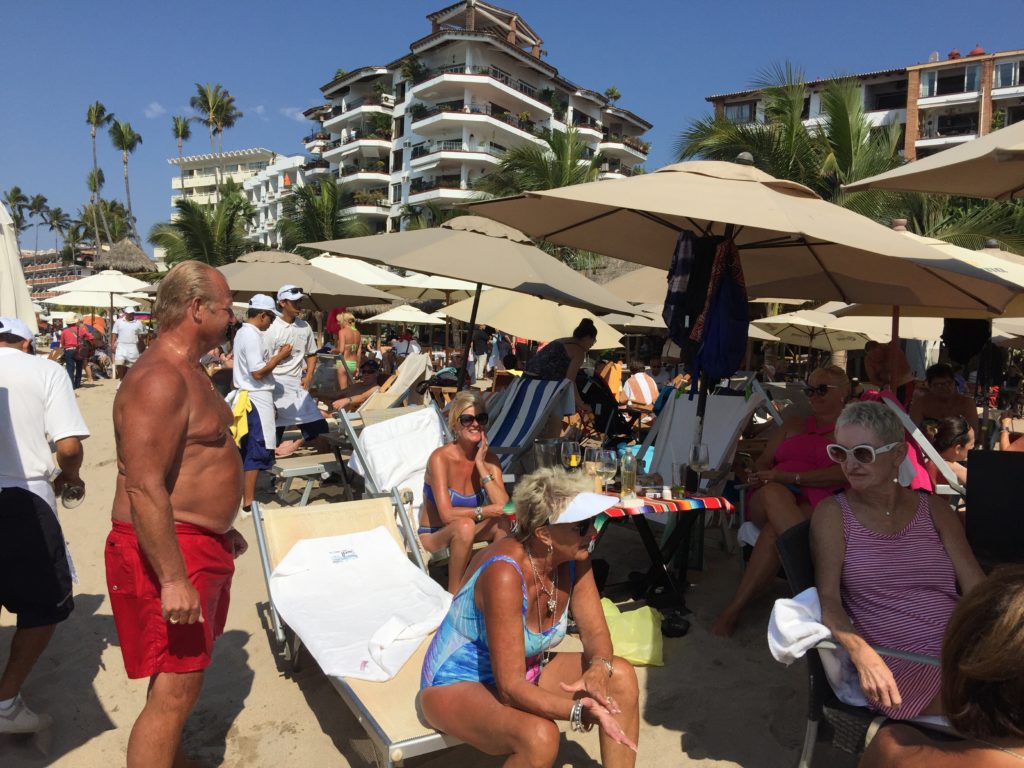 Some of our friends on the crowded beach. 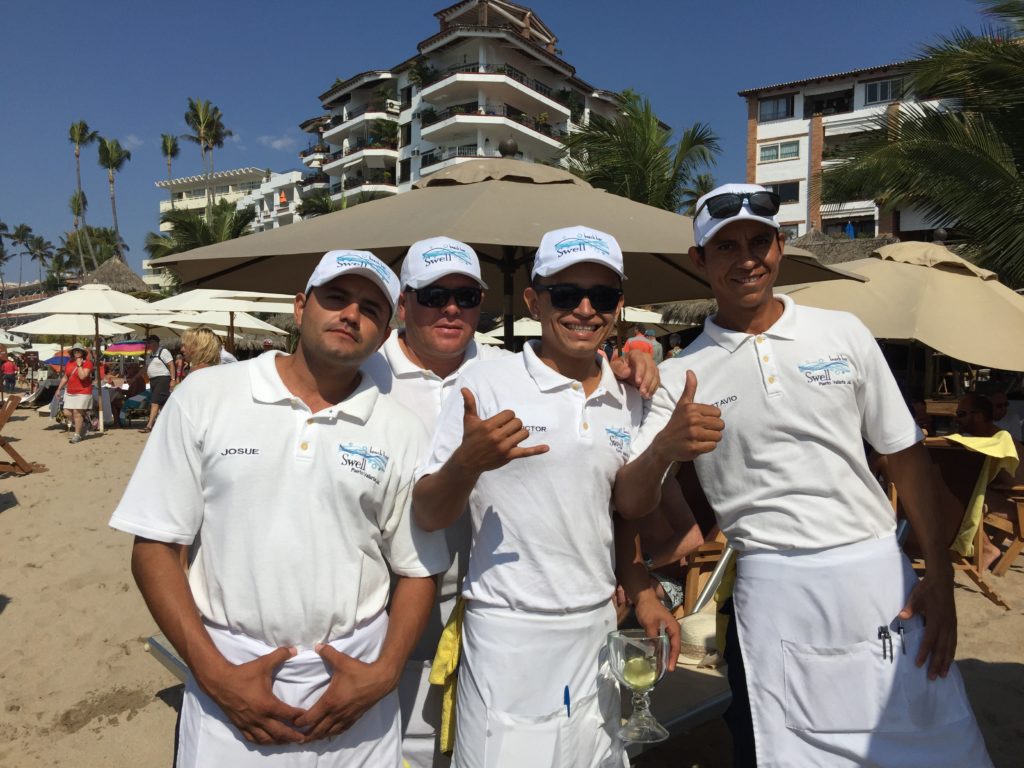 A few of the guys who take care of us at Swell Beach Club: Josue, Chuy, Victor, and Octavio.

And now for our trip to Mayto (MY toe) and Tehuamixtle (teh wah MISHT lay), more familiarly known as Tehua. Mayto and Tehua are two small towns right next to each other to the south of Puerto Vallarta. Mayto has a few little stores but it mostly consists of two small hotels on the beach. That’s where we stayed. Tehua is a working fishing village with a few hotels/rooming houses and several really good seafood restaurants. We were invited to go by our friends Sue and Fred Wilcox on their annual trip with Fred’s cousin Gary, his former co-worker Ralph and their wives, Carol and Jen, respectively. Since Sue and Fred have a car, it turned out to be a relatively easy trip, south on Hwy. 200 for about an hour to El Tuito and then down the mountains to the coast, another hour. 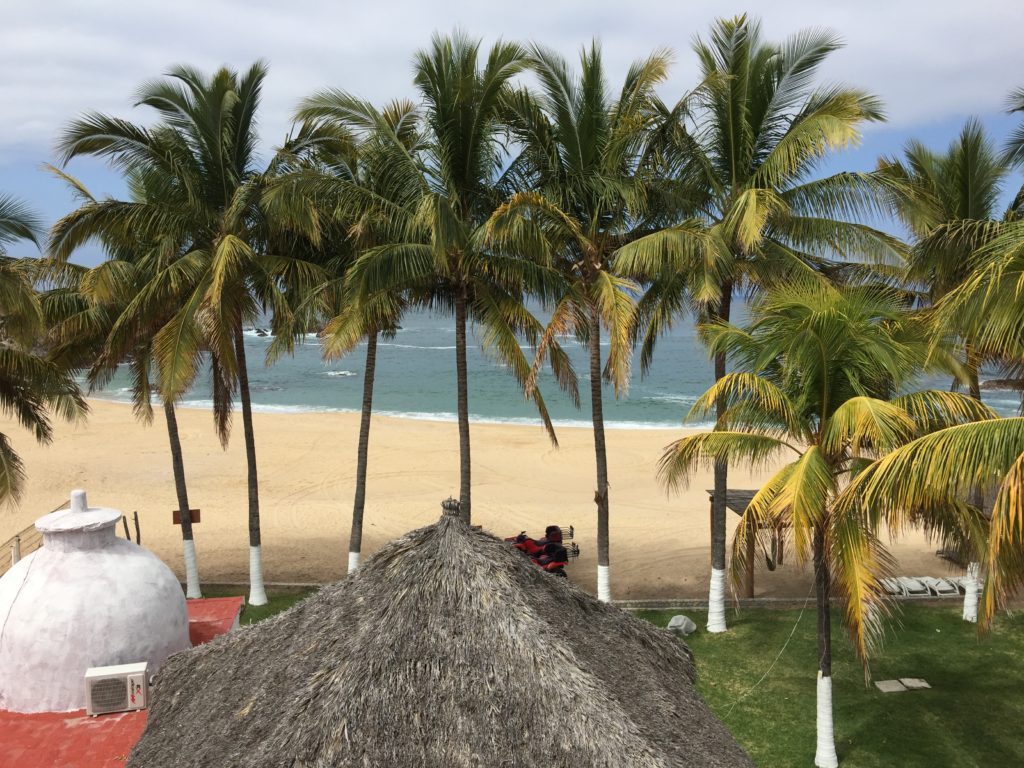 The view from our terrace at the Hotel Mayto. 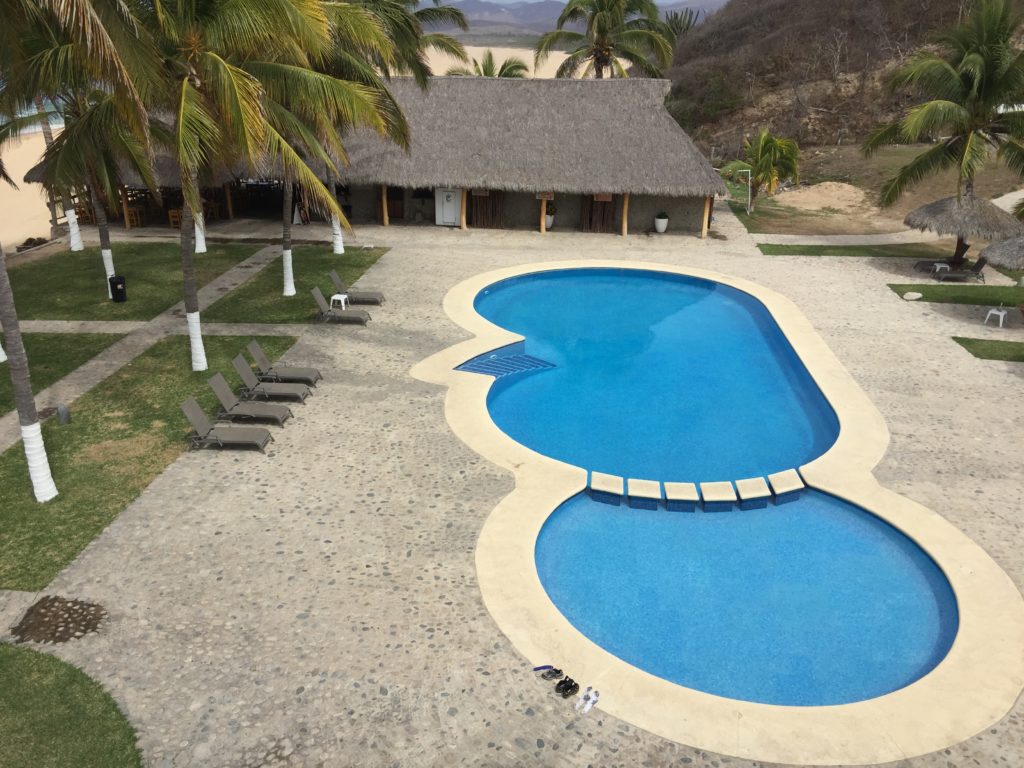 Looking down on the pool and restaurant. 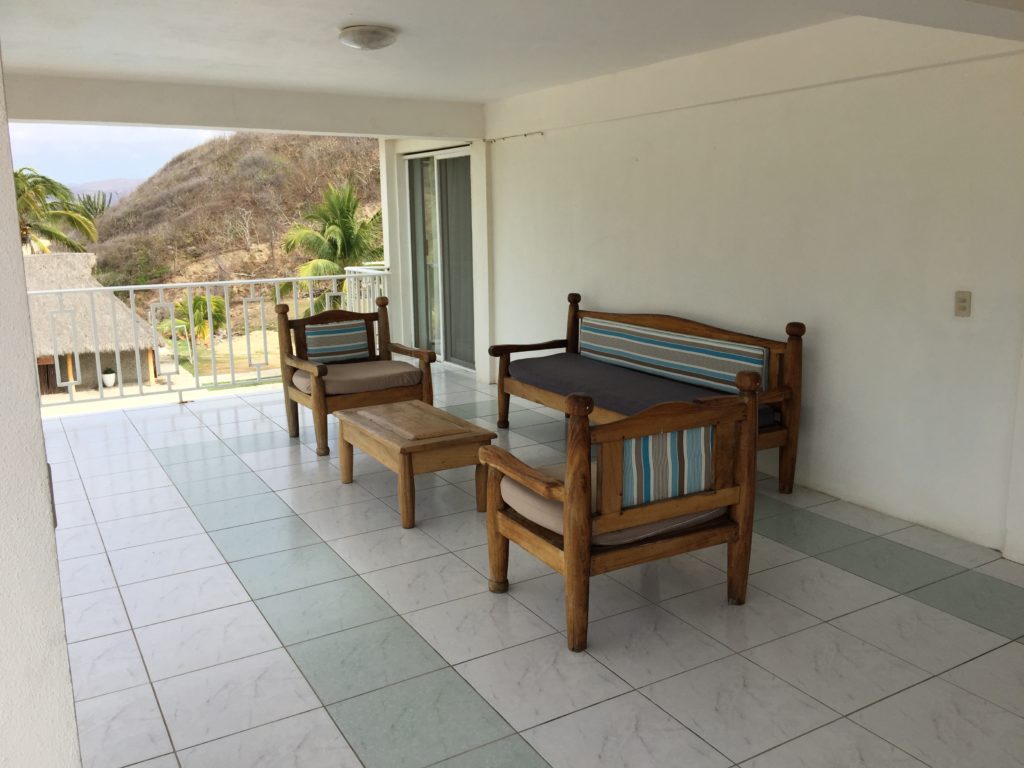 Our terrace, shared by the other room on that floor. 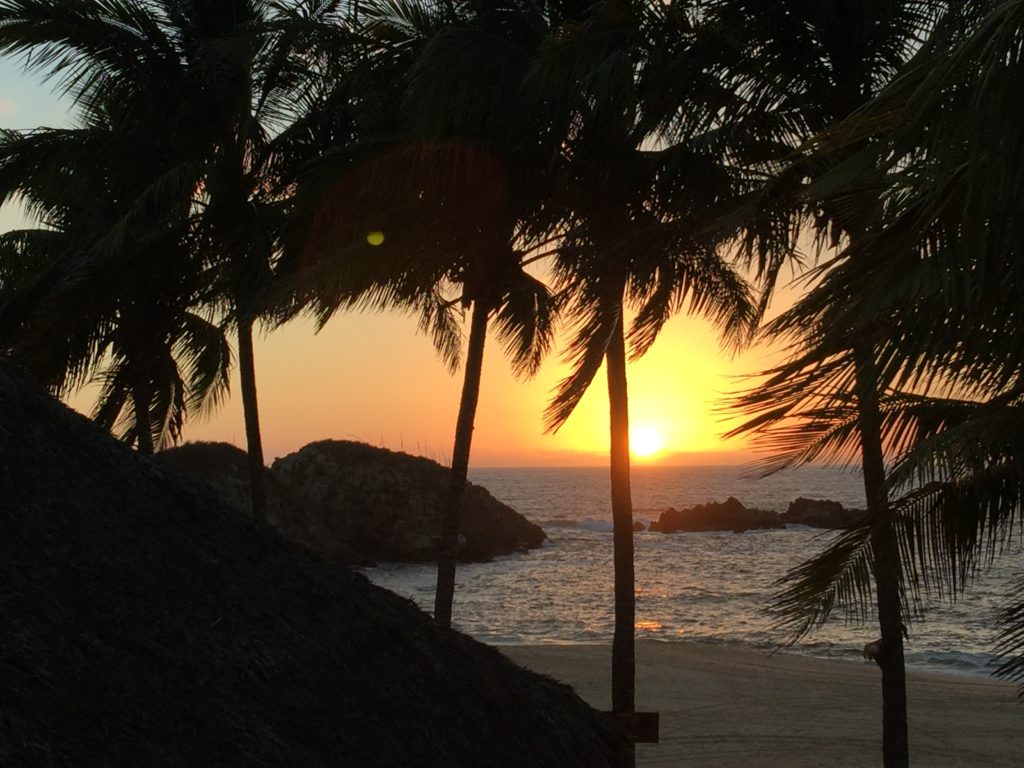 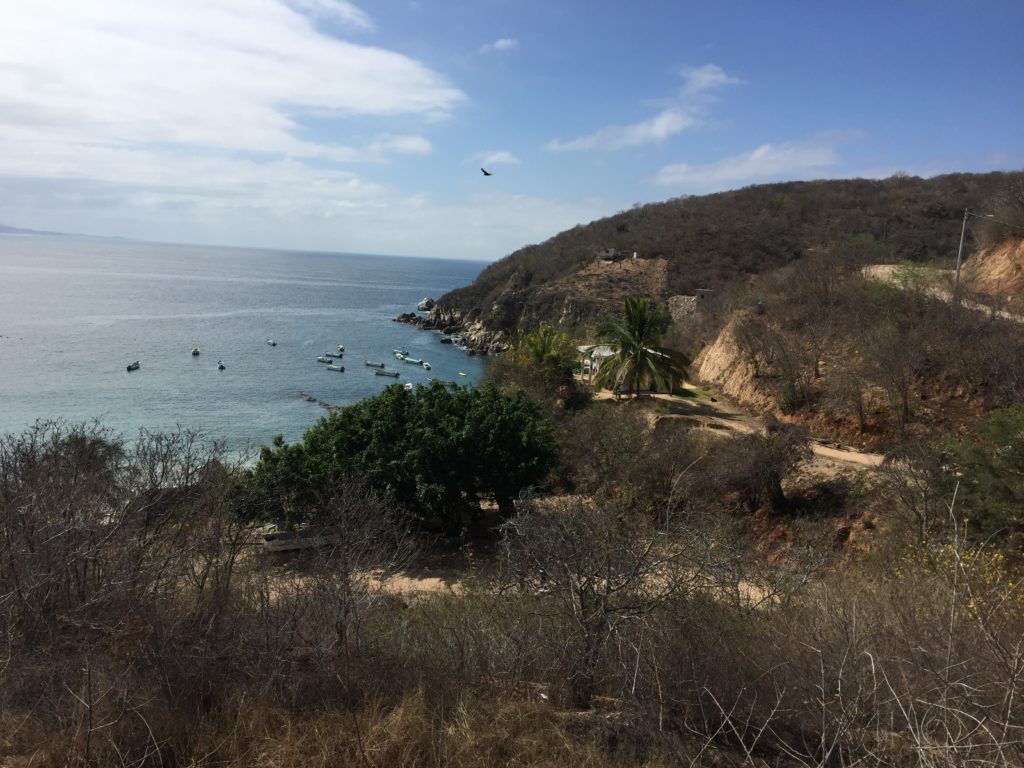 The first glimpse of Tehua from the road. 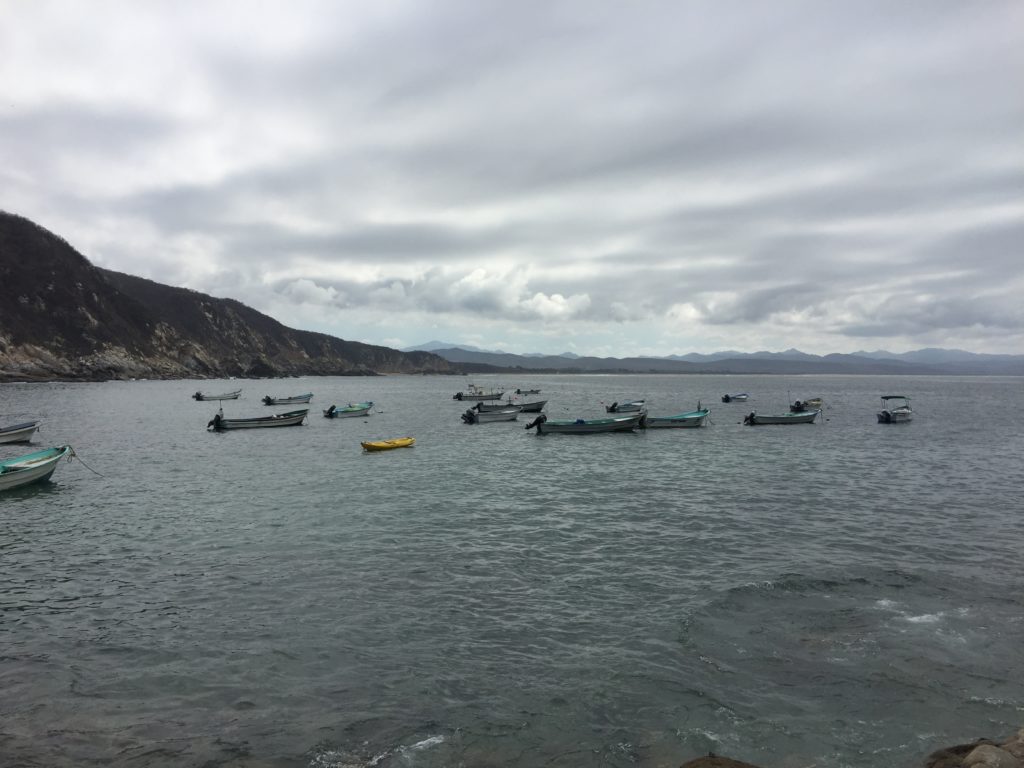 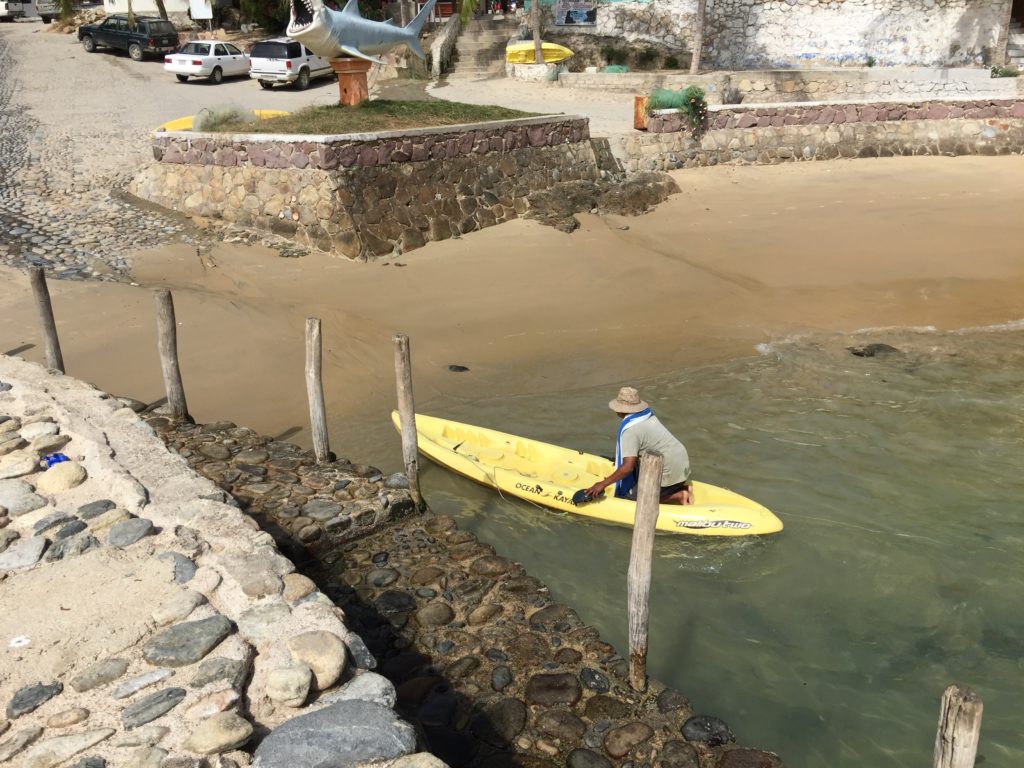 A fisherman coming in from his anchored boat. Note that his transport is a kayak, and that he is paddling with his flip flop! 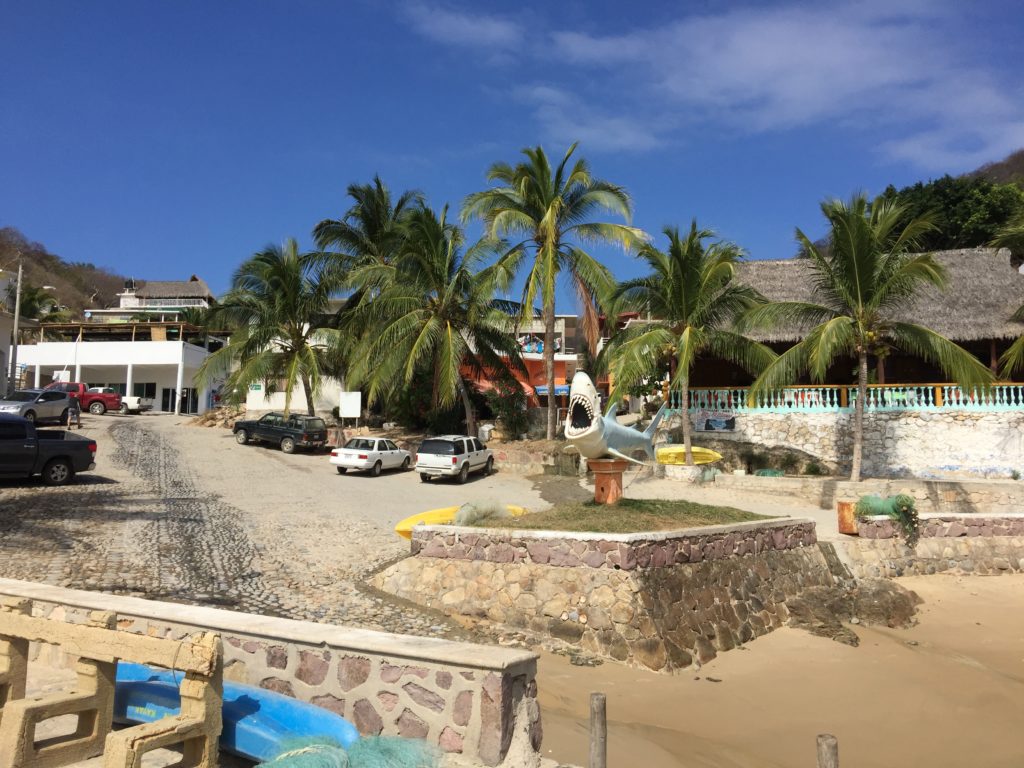 The town of Tehua from the pier. 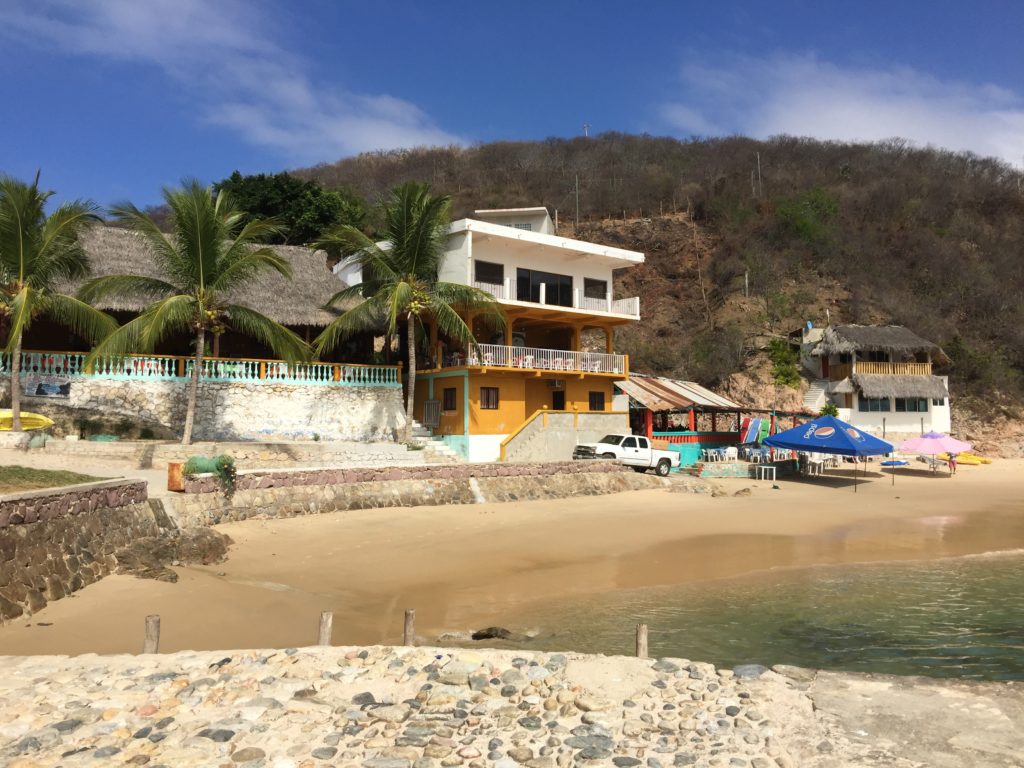 Another view of Tehua, a little up the beach. The restaurant where we had dinner is the little building with red pillars and a tin roof on the right. During the day it’s a seafood processing plant. For the evenings they clean it up and set up restaurant tables. 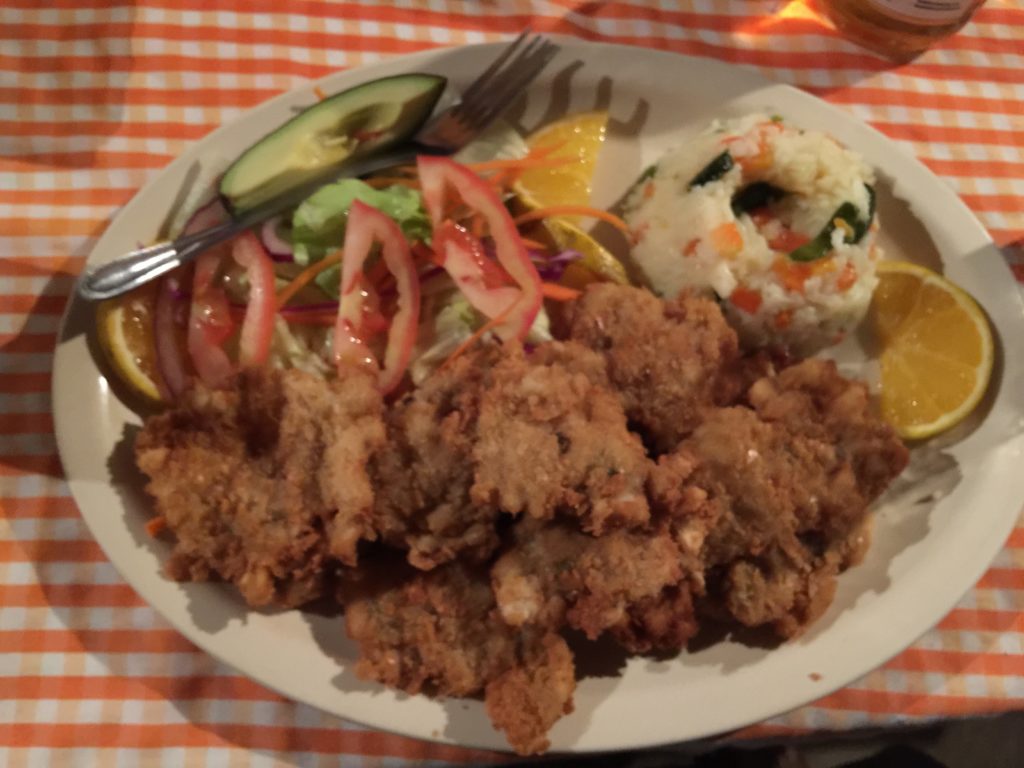 OK you foodies, here’s a shot of my fried local wild oysters. There were at least 20. 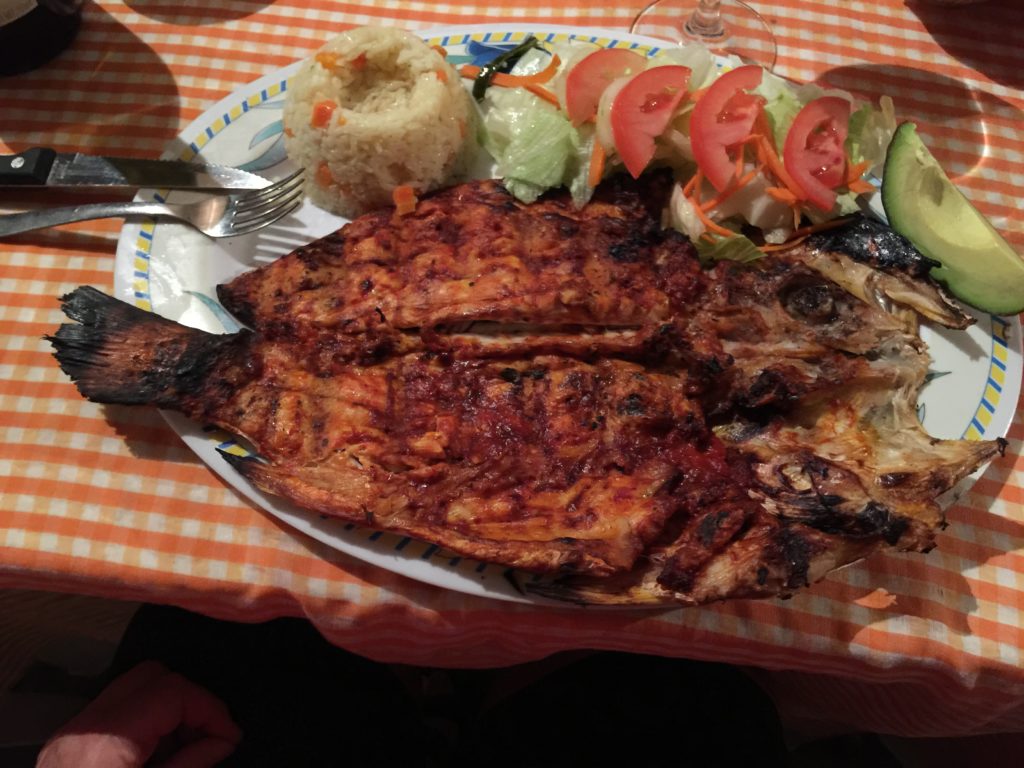 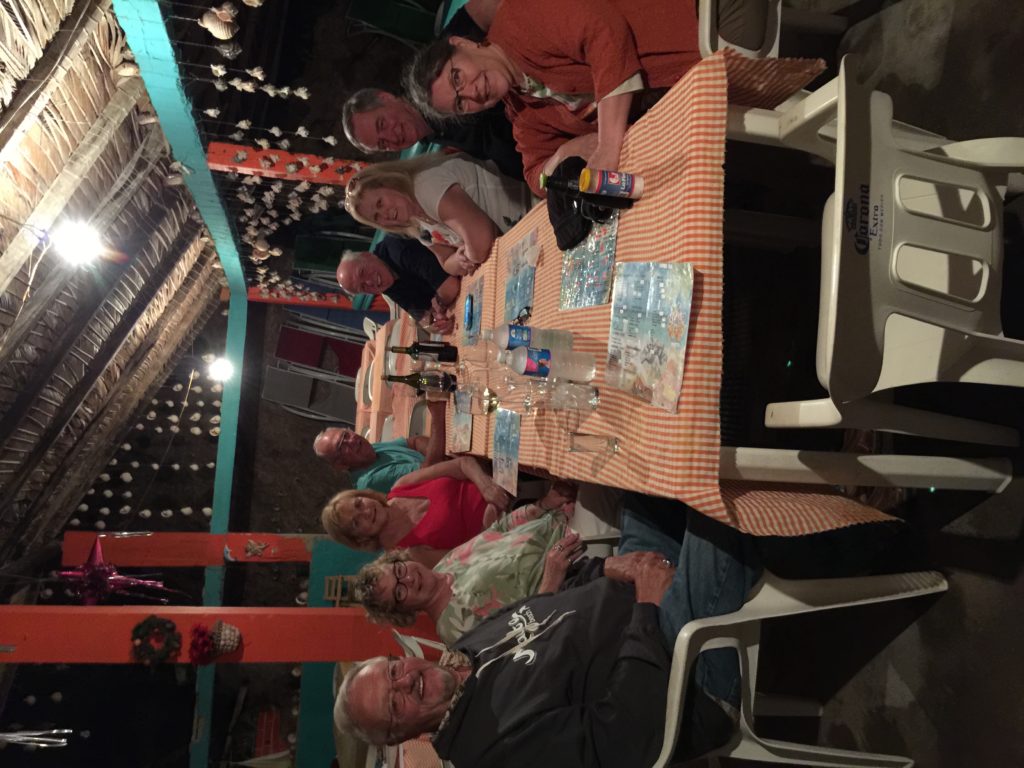 Here is our whole dinner group in Tehua. Good friends and some of the best seafood ever.

The day we got back from Mayto and Tehua, my sister Laurie and her husband Bob arrived for a week’s visit. Laurie lived in Portland for years, so I got to see her fairly often, even after we moved to Lincoln City. But she married Bob last summer and moved to Colorado Springs, making this visit special. It was great showing them around and especially showing my sister how our life is here in Vallarta. They loved it, and when they left were already talking about coming for a longer visit next year. 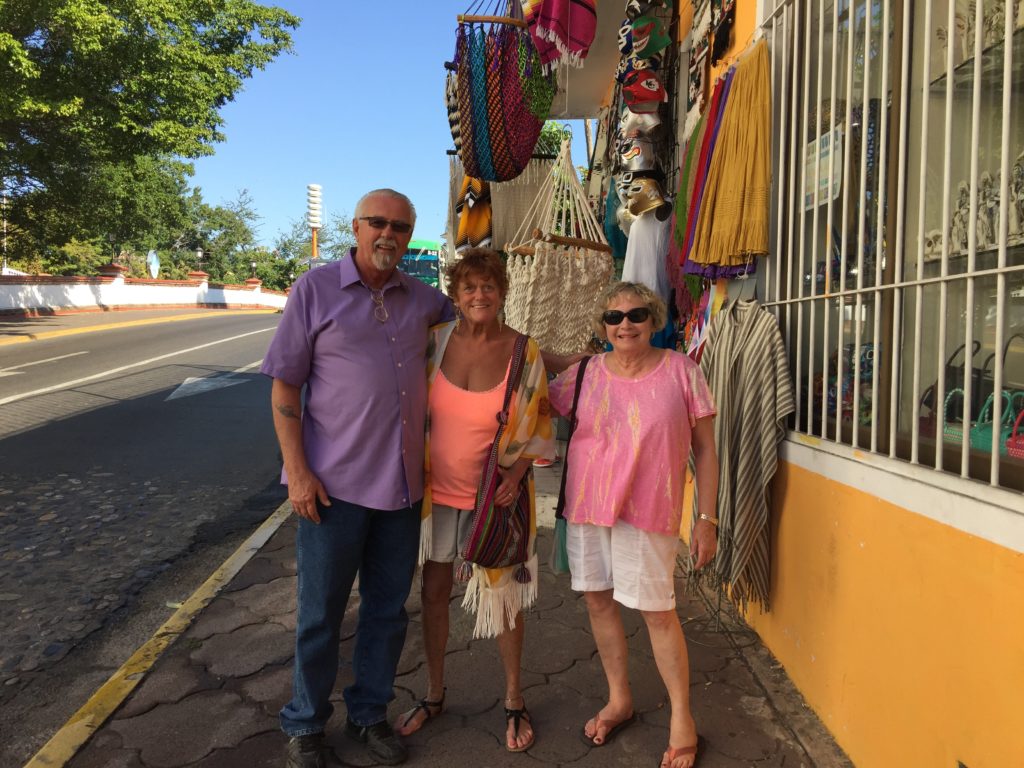 Bob. Laurie and Peggy on the Ignacio Vallarta bridge. 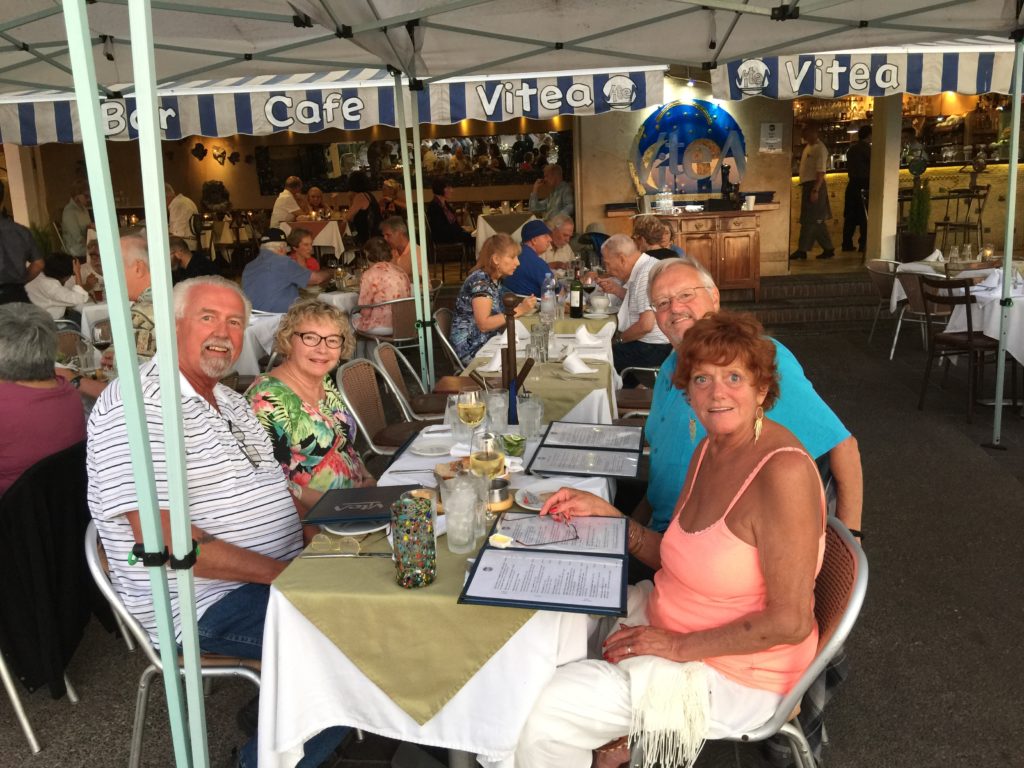 Here are the four of us at dinner at Vitea on the Malecón. 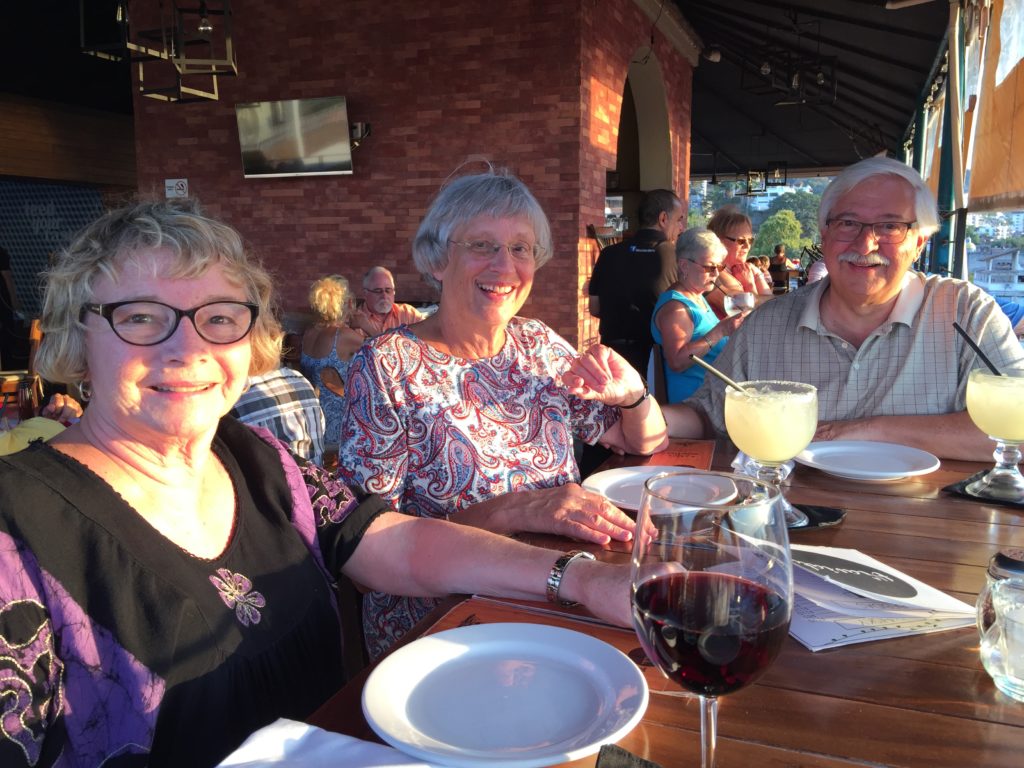 And to bring you right up to date, here is Peggy with Carol and Ethan Shapiro at last night’s dinner at La Traviata. I have known Ethan since 1970, and it has been great seeing them in Vallarta the last couple of years. 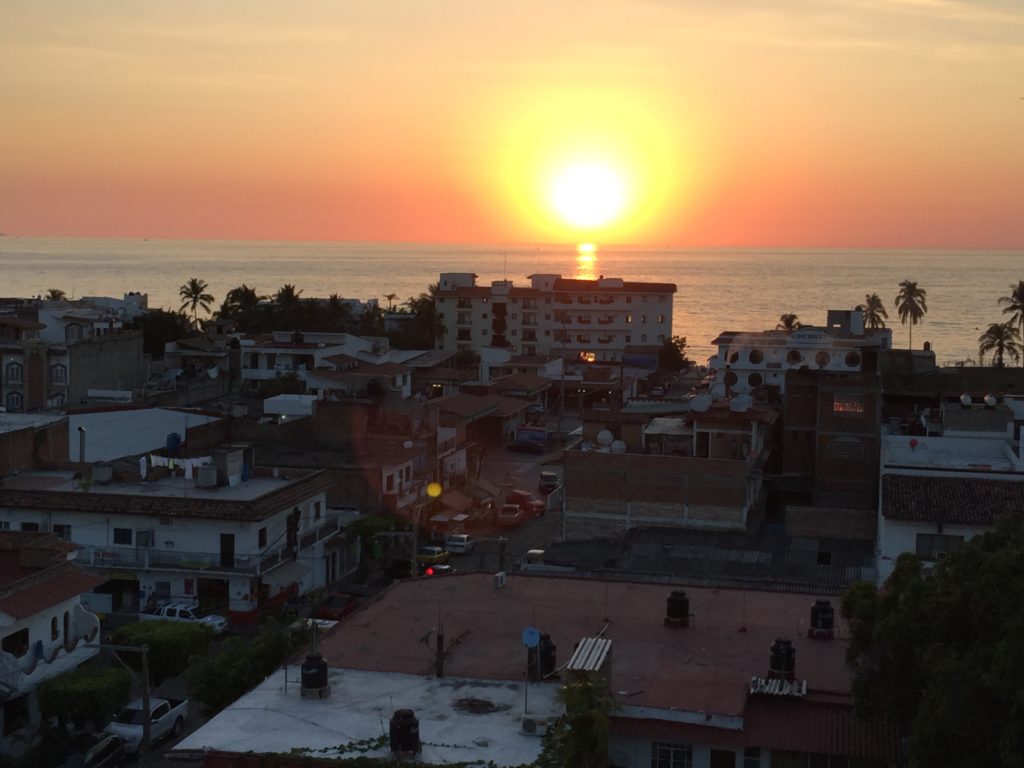 The sunset from La Traviata.

The rest of this post will be a collection of pictures I thought would be interesting. 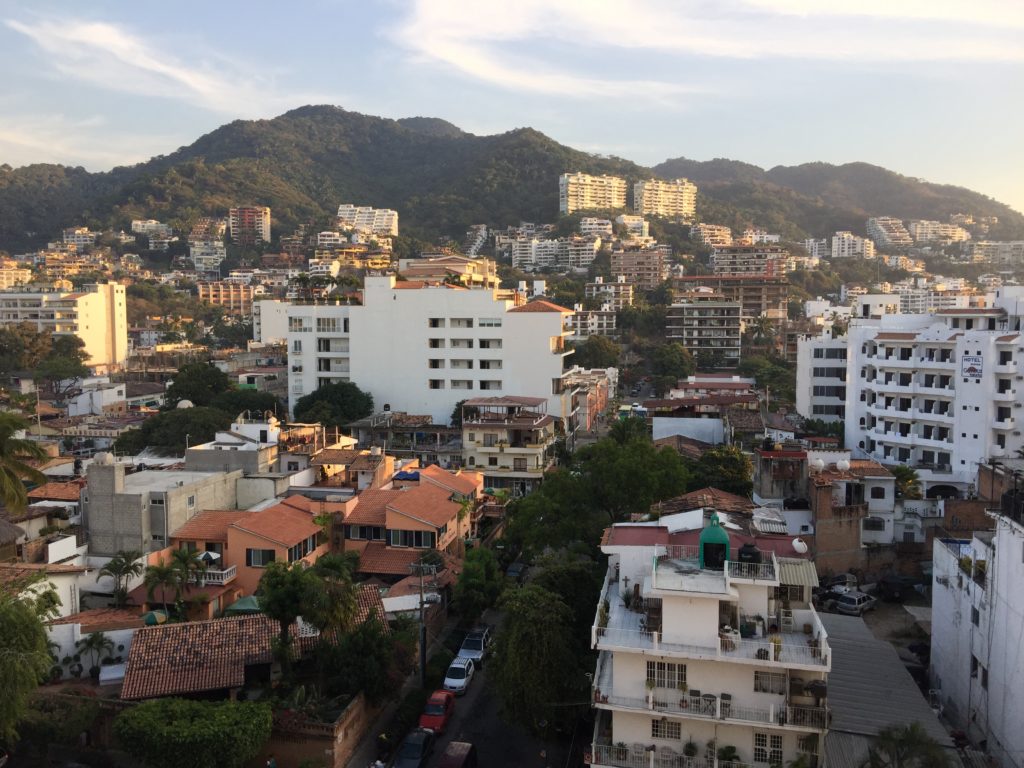 A view of our part of town from our friends’ rental in one of the Molino de Agua towers. You can’t see our house; it’s behind that big white condo building. 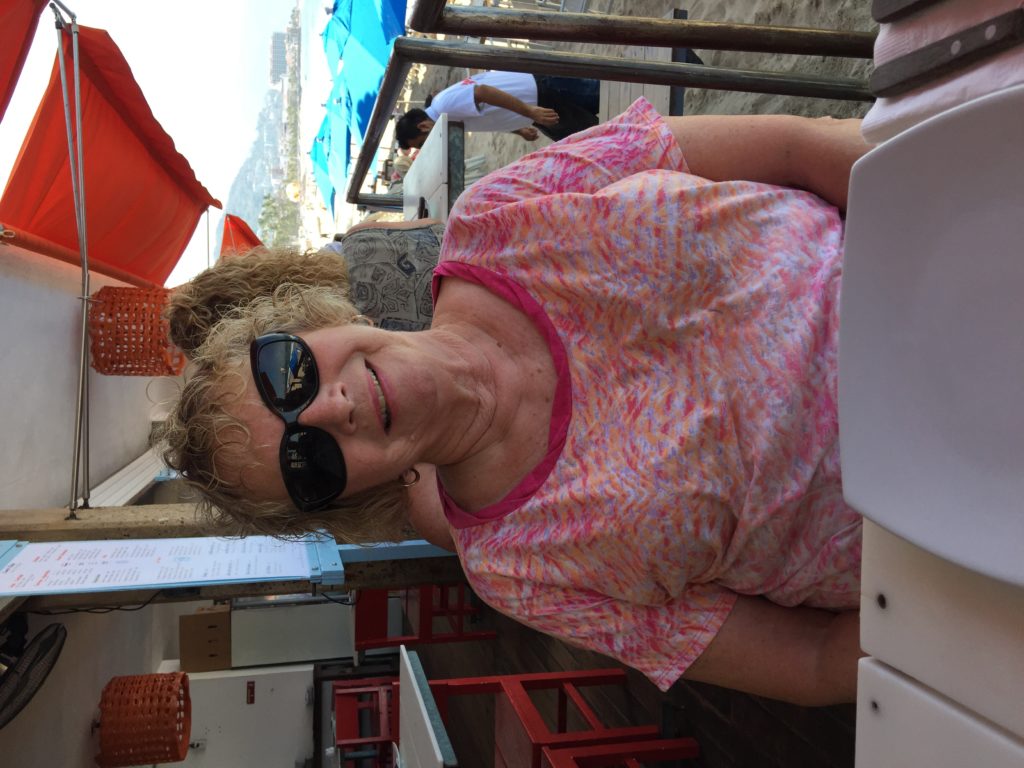 Peggy at El Barracuda for lunch. 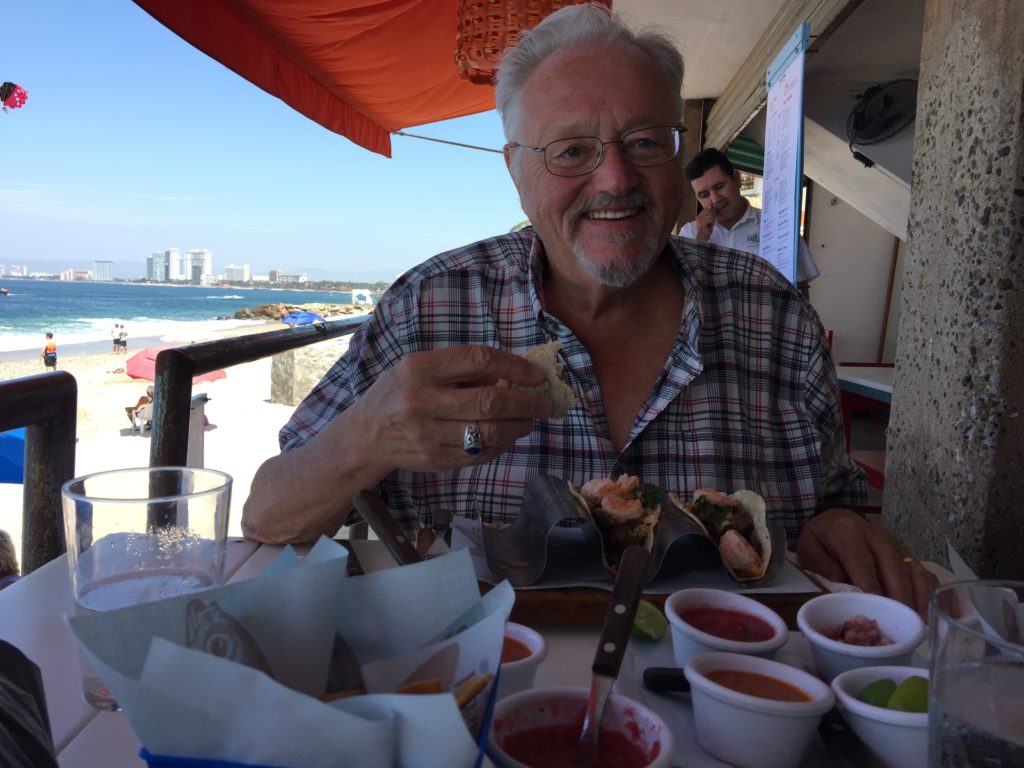 Me with my tacos, same lunch spot. 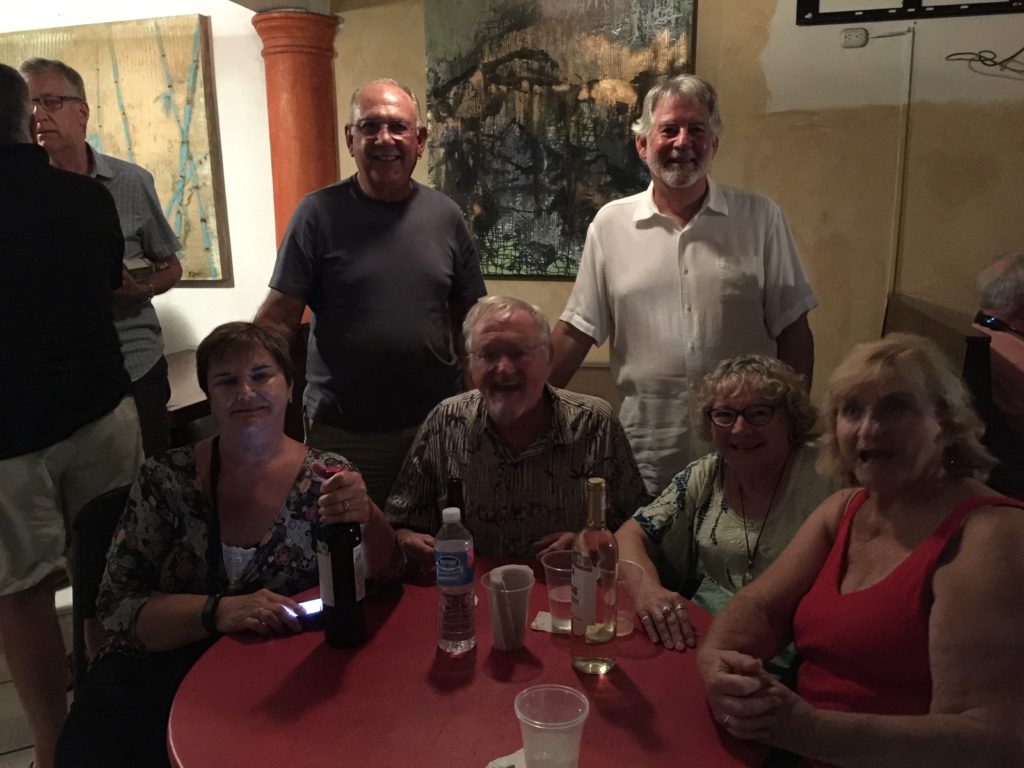 Our triumphant trivia team, Strangers No Más, with Ellen, me, Peggy and Sue in the front row, and Fred and Rick standing in the back. We won the Pub Trivia Team Tournament, a benefit for Corazón de Niña, a home for abused children. 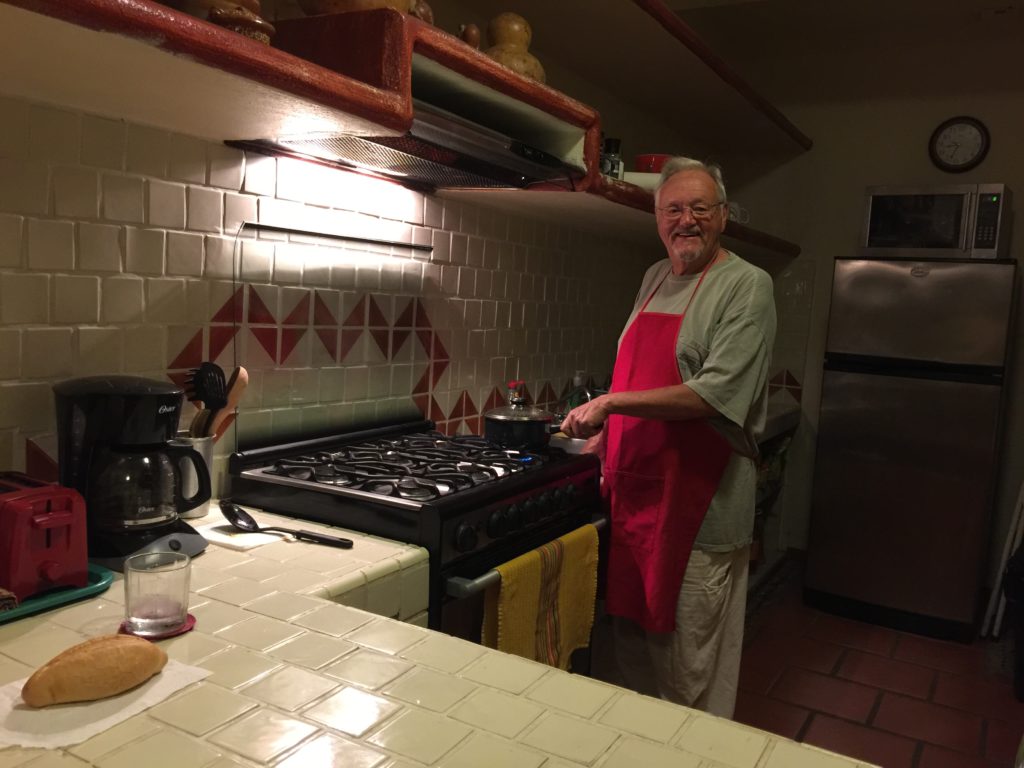 Me at my usual spot in th kitchen. 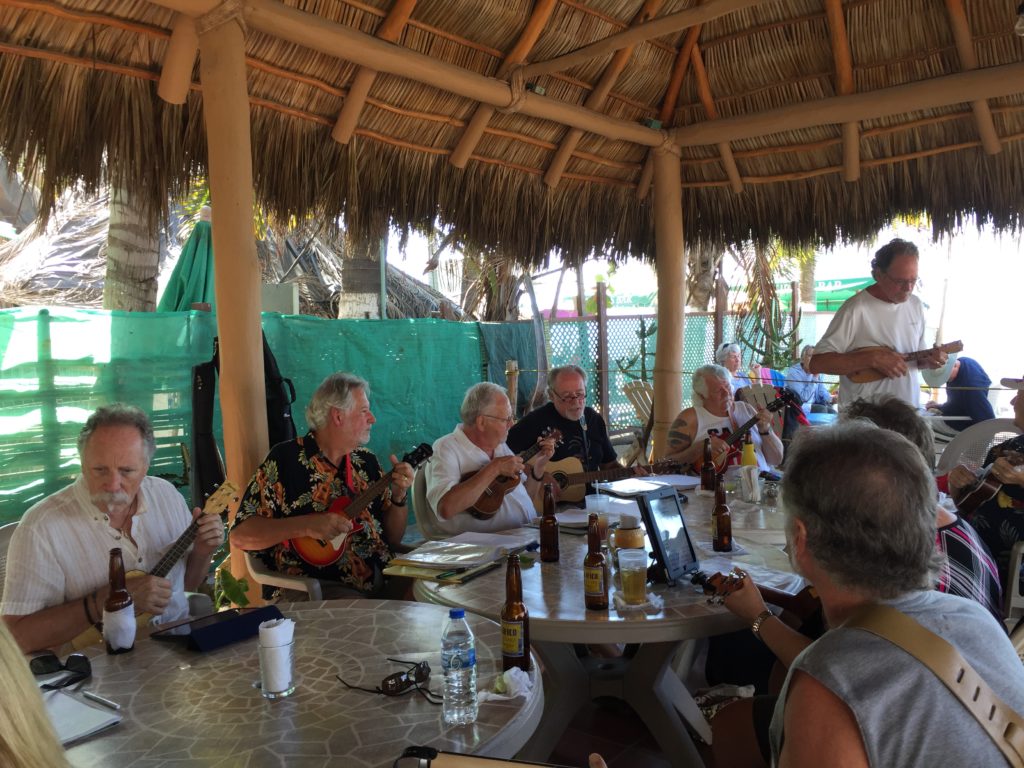 Los Vinolentos hard at work at the Red Onion. 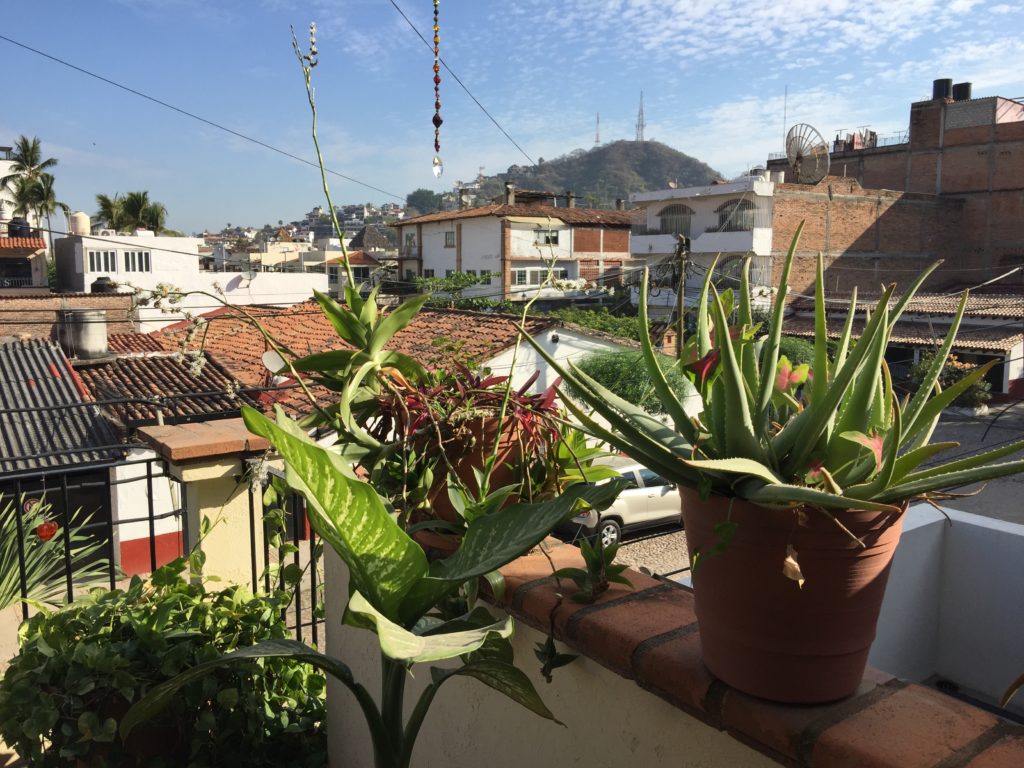 Plants blooming on our terrace. 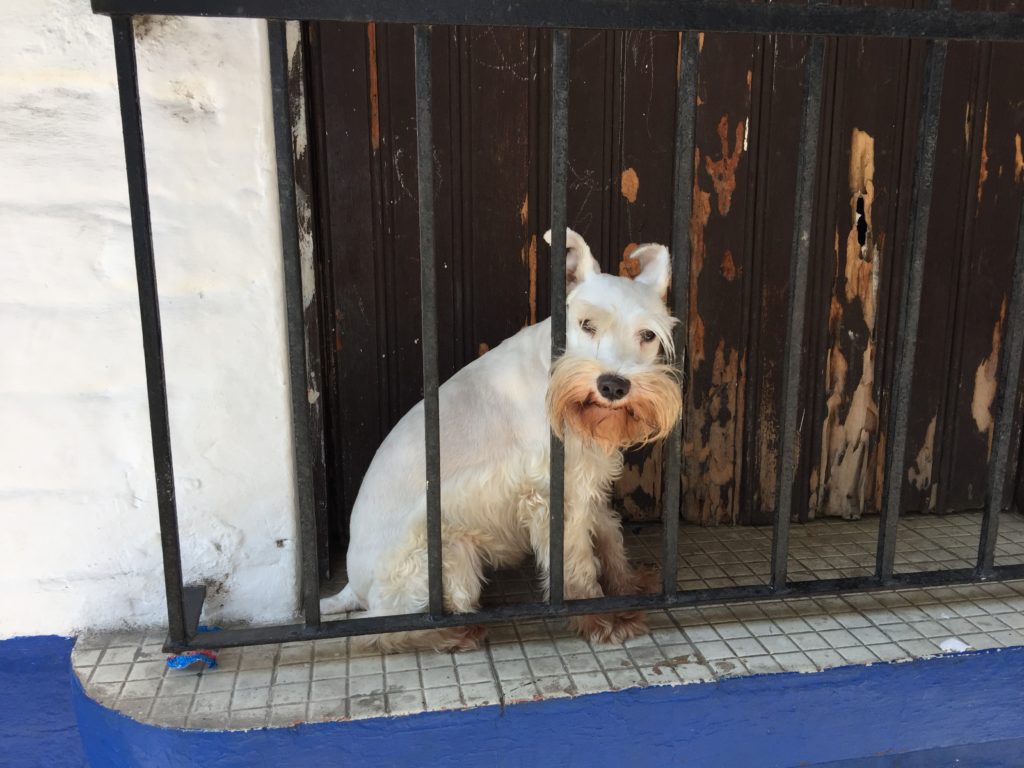 A doggie in the window. 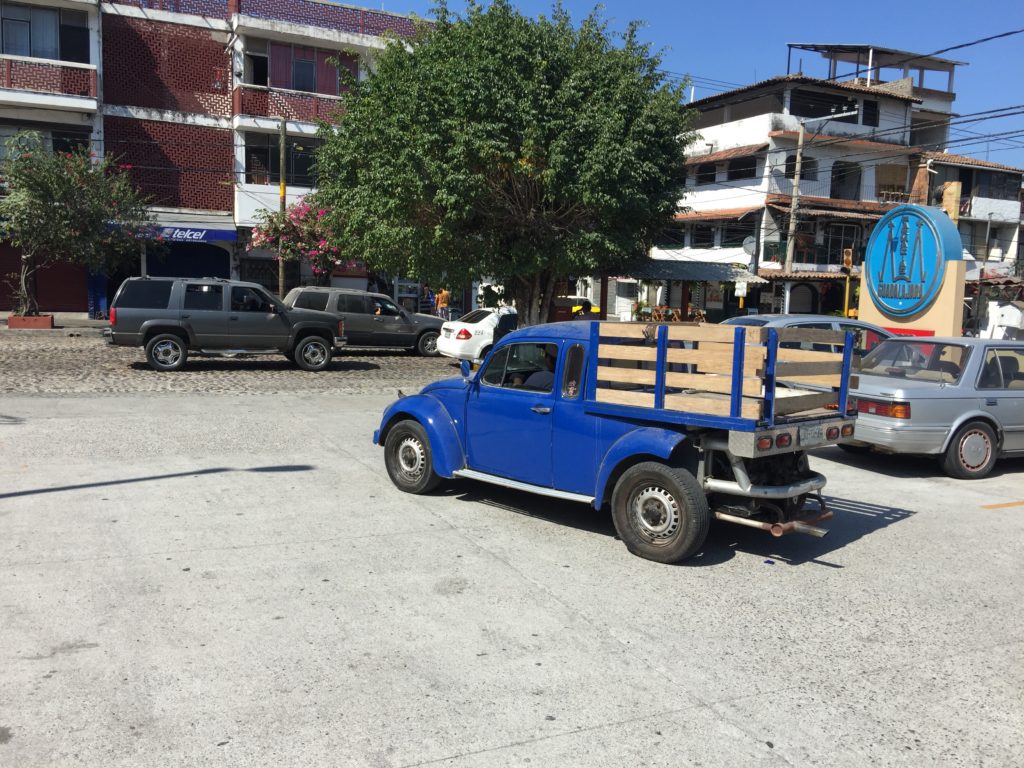 And finally, from the “Only in Mexico” file, a VW bug pickup!

Well, that’s it for this edition of OnVallartaTime. Sadly, we only have a few weeks left in our second home. But next week we will be going on a tour to Copper Canyon! Google it, you will be amazed. It’s four times larger, and deeper, than the Grand Canyon in the US. One of the hotels we will be staying in, Hotel Mirador, is cantilevered out over the rim of the canyon. Should be a very interesting trip. I promise I’ll show you the pictures, even if I have to do it from home in Oregon.  Until then!