Hello again and welcome back to OnVallartaTime! It’s been a while, ever since we left to return to Oregon in April for the summer.

We arrived the afternoon of November 2nd. Because the flight landed a little earlier in the day than usual, the lines were short and we breezed through immigration and customs. We were met at the airport by the lovely Rosario, our neighbor and wife of our landlord. It sure was nice of her to spare us the expense and hassle of getting a cab!

We left the relative comfort of the feeble airport air conditioning into the full heat and humidity of the afternoon —  wow! We weren’t in Oregon any more! Luckily, Rosario’s SUV has A/C, and it stayed on once we jammed a little clip into the switch on the dash. It was a beautiful ride through the city to our apartment. We were greeted by familiar sights along the way, and the mountain jungles were green against the blindingly blue sky, lush from the recent rainy season. We quickly remembered why we like it here so much. We were back!

Rosario’s teenage son, Bernardo Jr. helped us drag all the heavy luggage up the stairs, and soon we were once again in our second home. Everything was just as we had left it. It was a little musty but we knew that would disappear soon. We were already comfortable.

Since we arrived over a week ago, we went shopping for food and a few things for the house, we have been to the beach a few times, and we have gone for walks and rediscovered familiar and favorite sights and places. We’ve even had some visitors! The best part has been greeting old friends, both foreign and local.

Here are a few pictures that show some of our activities. 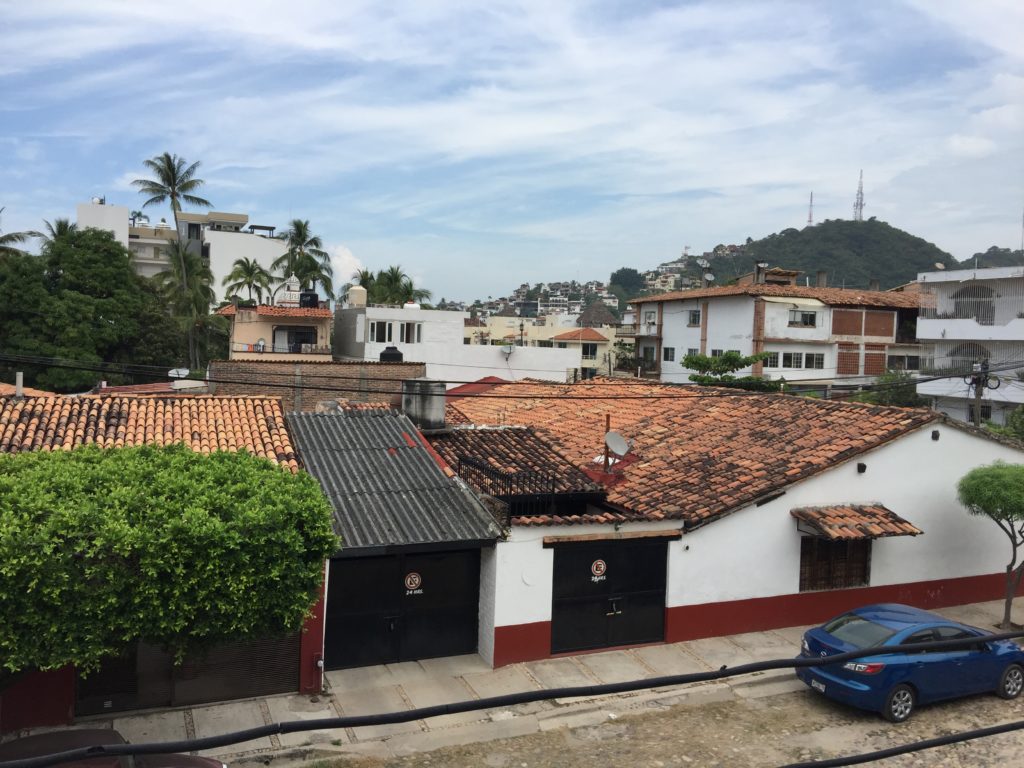 Morning view from the terrace of our apartment.  I like to sit here, have coffee, and watch the neighborhood come to life. 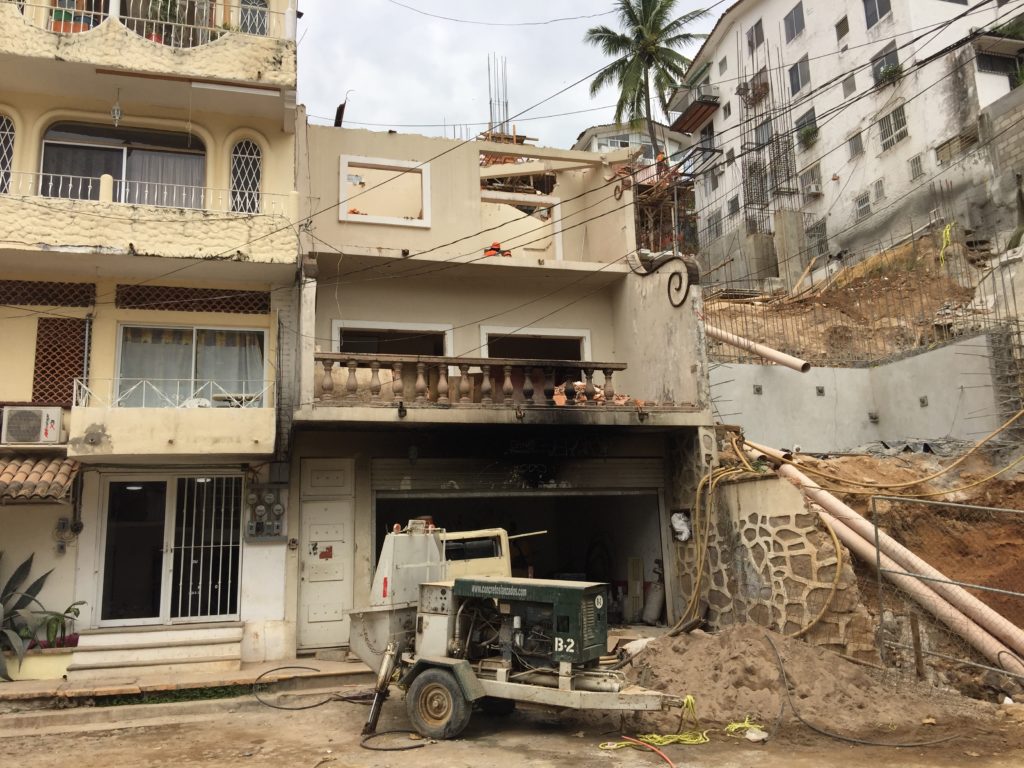 There is a huge construction project at the end of our street, where they are building another condo building. The neighbors protested the illegal sale of the continuation of the street by the city government, but to no avail. It doesn’t bother us much because it´s at the other end of the block. But we have friends who live right next door who are looking for a new place. 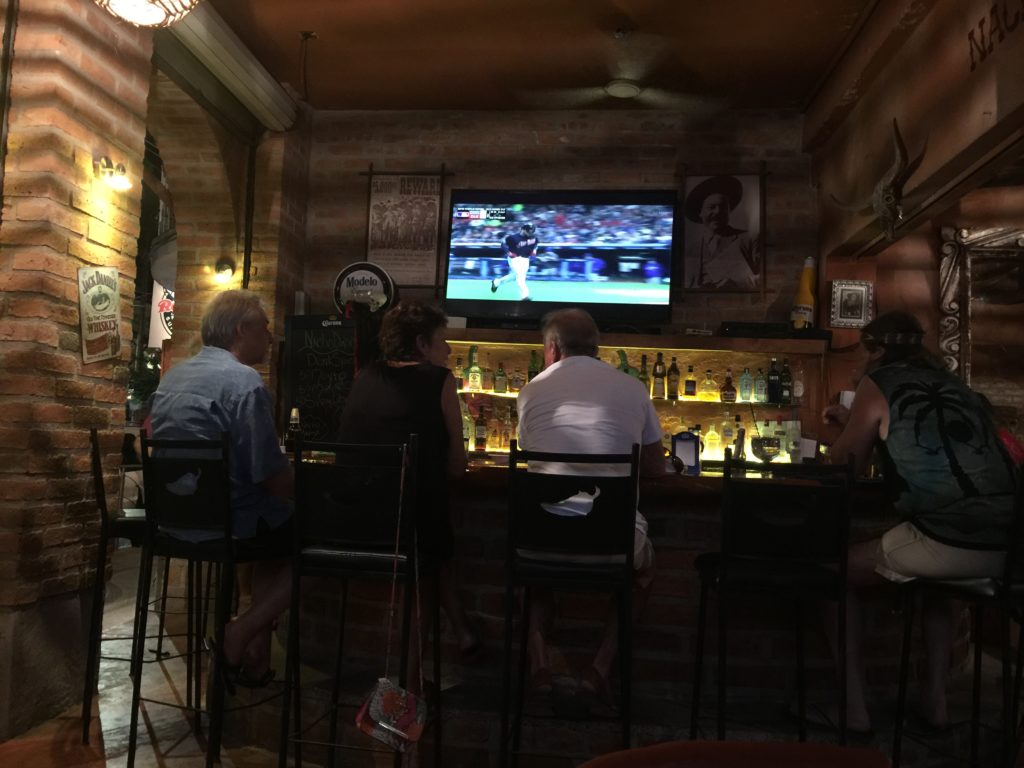 We arrived during the World Series, and discovered that our TV, bought new just before we left in the spring, was fried by a lightning strike during the rainy season storms. (This was my fault for leaving it plugged in.) So we watched the last two games at neighborhood hangouts. Our TV was still under warranty so we’re getting it fixed. 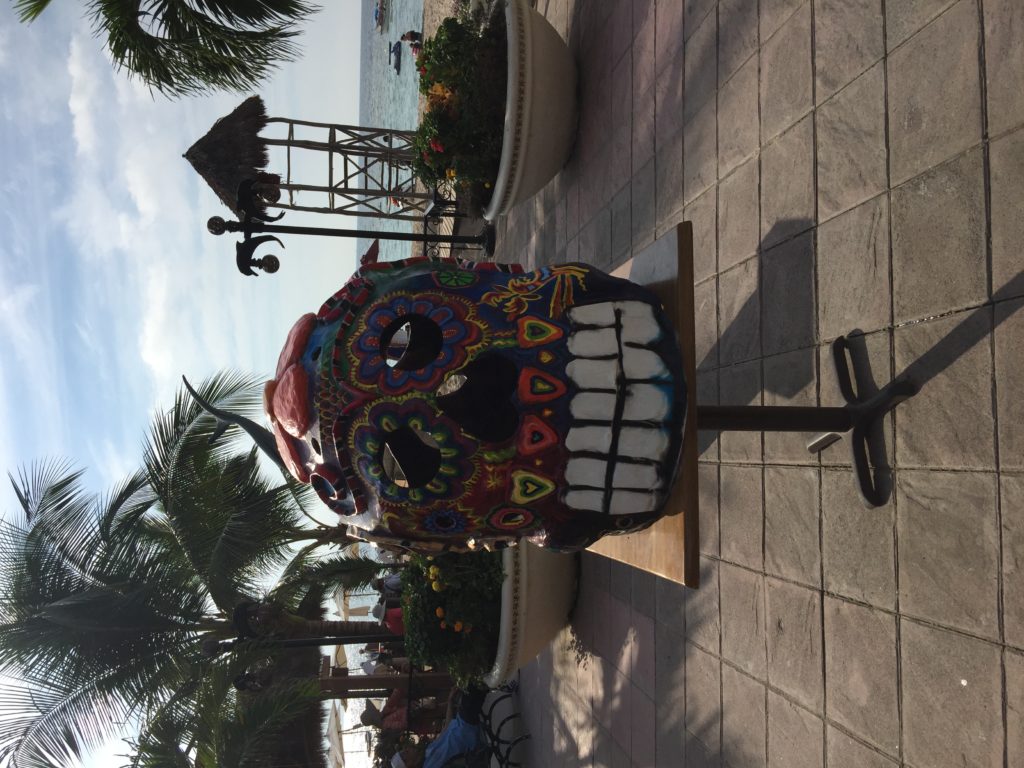 We arrived on the Day of the Dead, so we missed the festivities. This is part of the decorations from a restaurant, headed for storage. 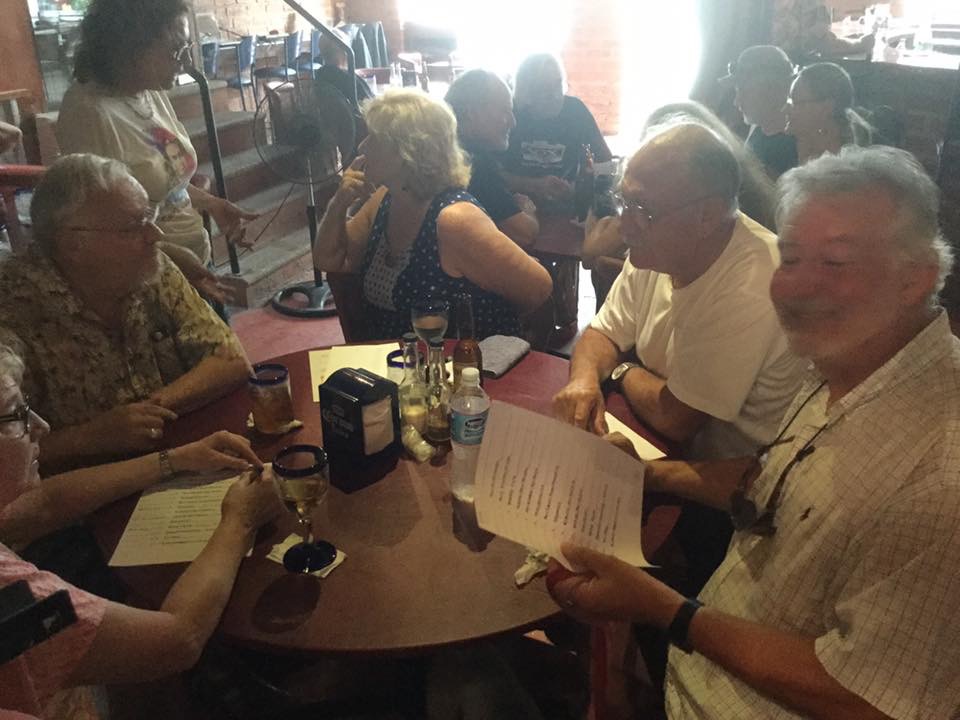 Here is our team at the first Happy Hour Trivia session. 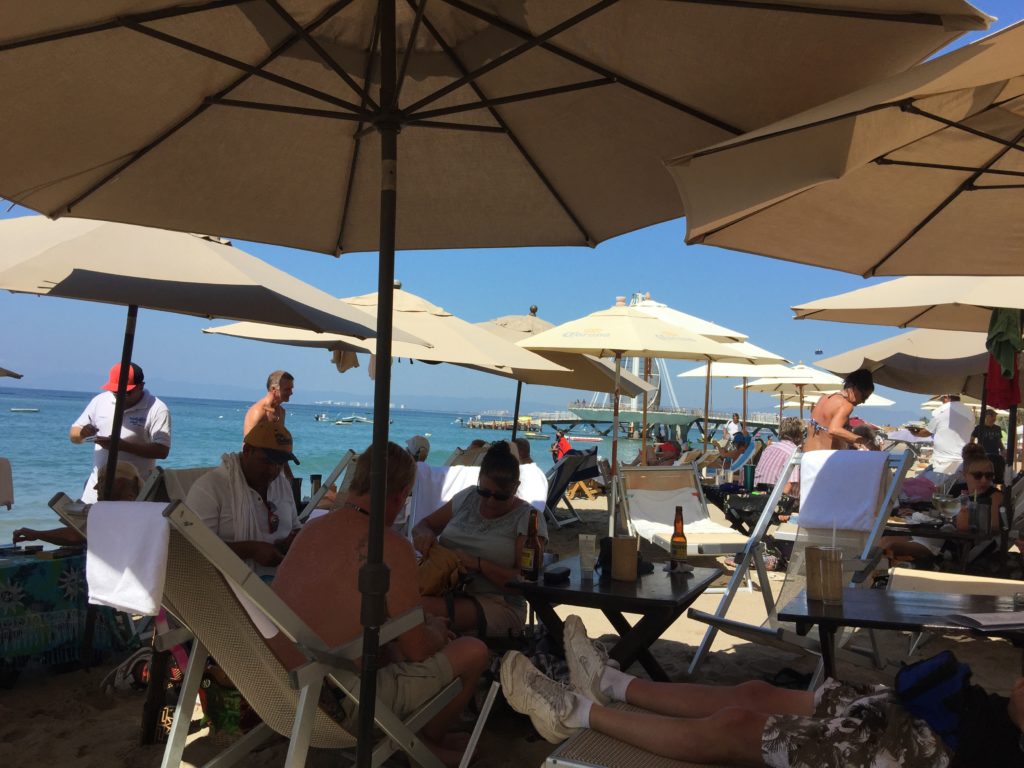 A quick shot of the beach. There aren´t too many tourists in town yet, but on this particular day there were three cruise ships in port. 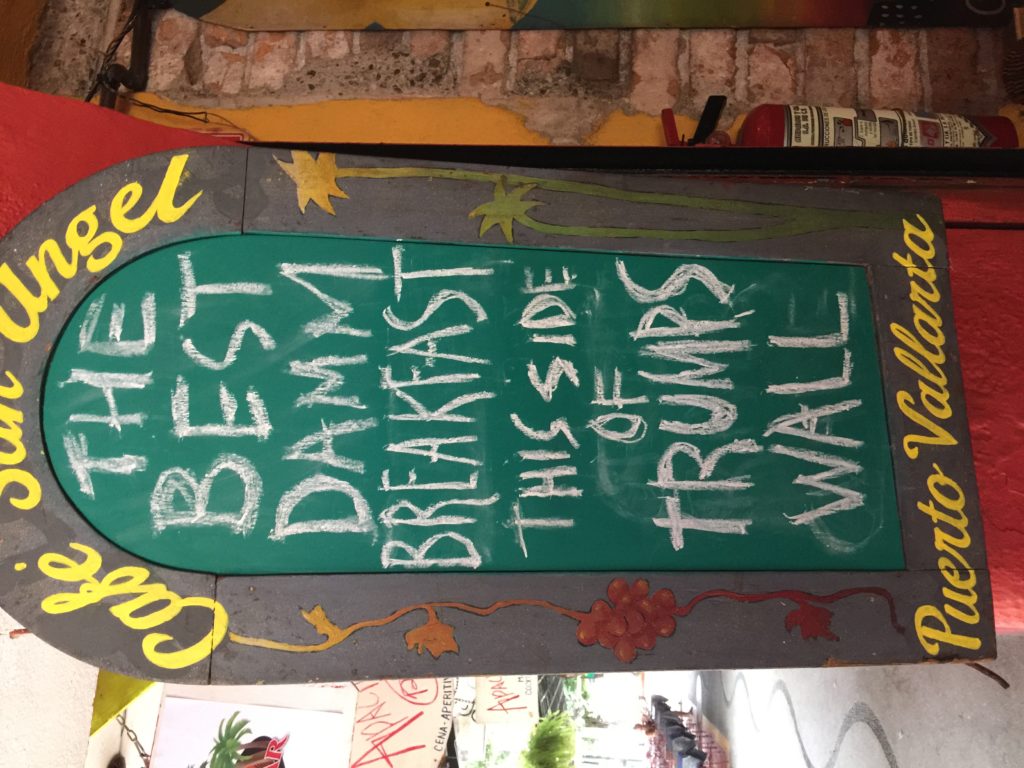 I don´t want to get into the election here, since it´s not the purpose of OnVallartTime. But as you can imagine, there´s a lot of anti-Trump sentiment here. This is one of the milder, humorous expressions of it. 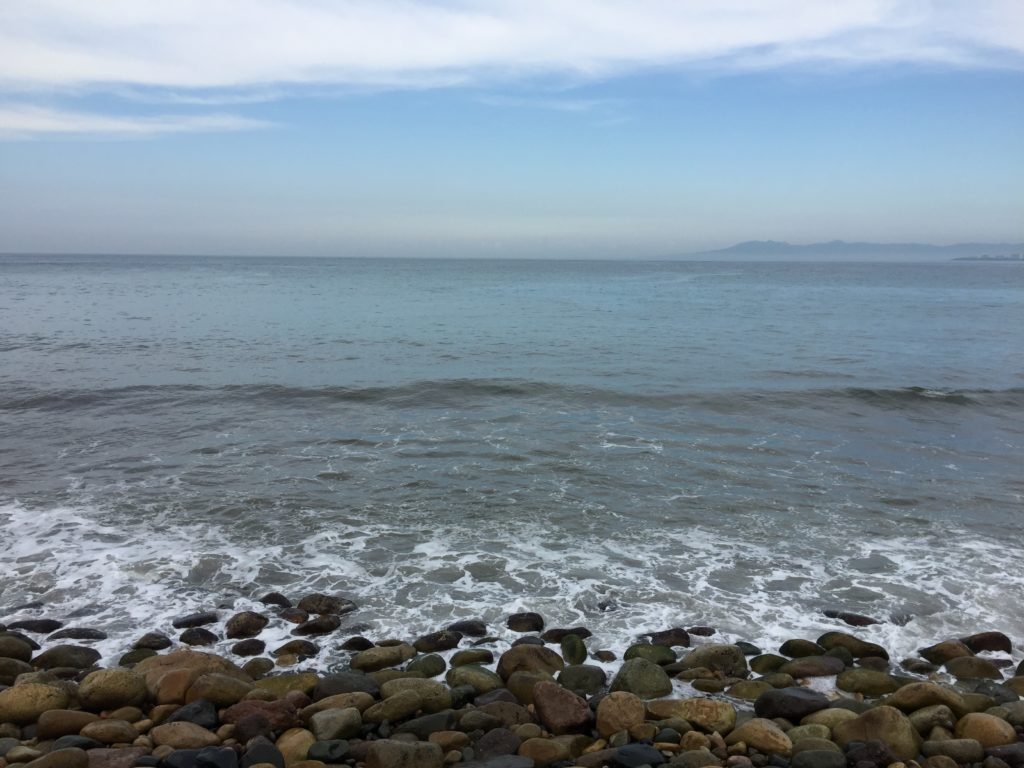 A calming ocean view taken the morning after the election. 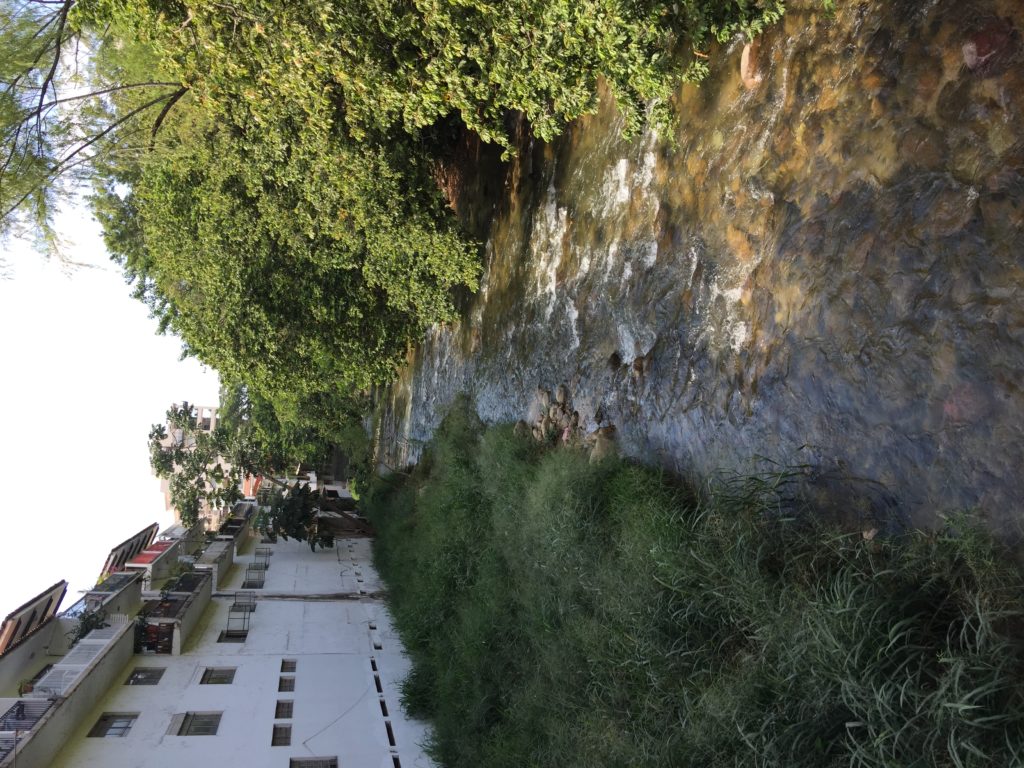 This is the Rio Cuale, running fast at the end of the rainy season. 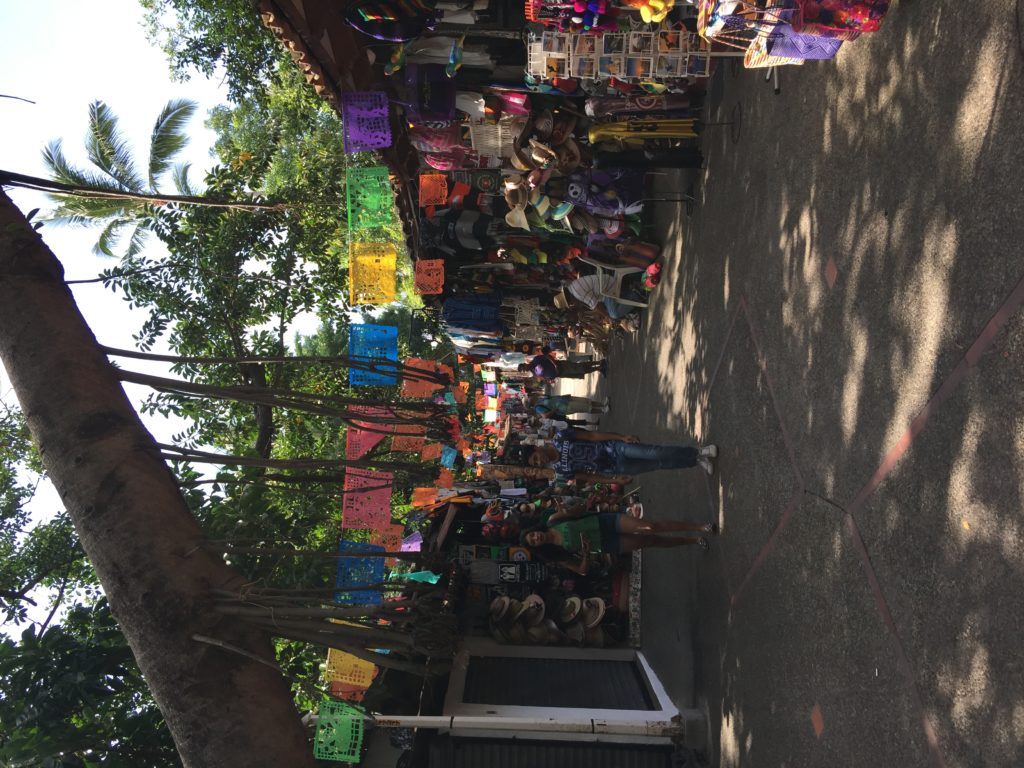 Peggy and I strolled through the Isla Cuale market. 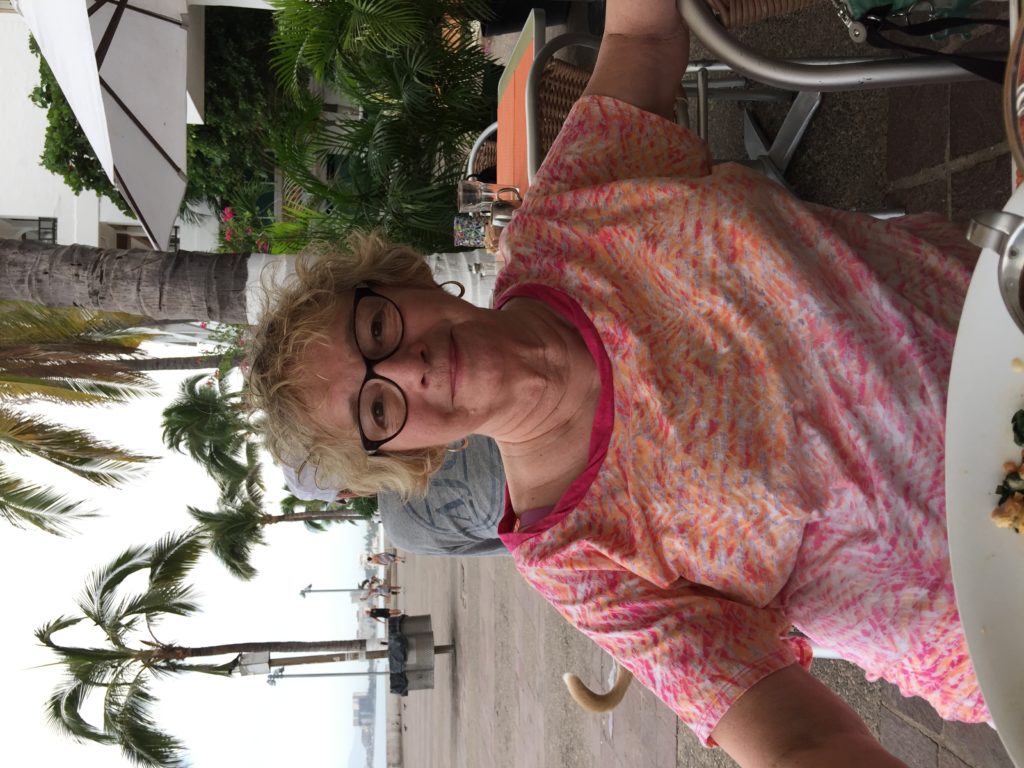 Peggy at breakfast at one of our favorite spots, Vitea, on the Malecón. 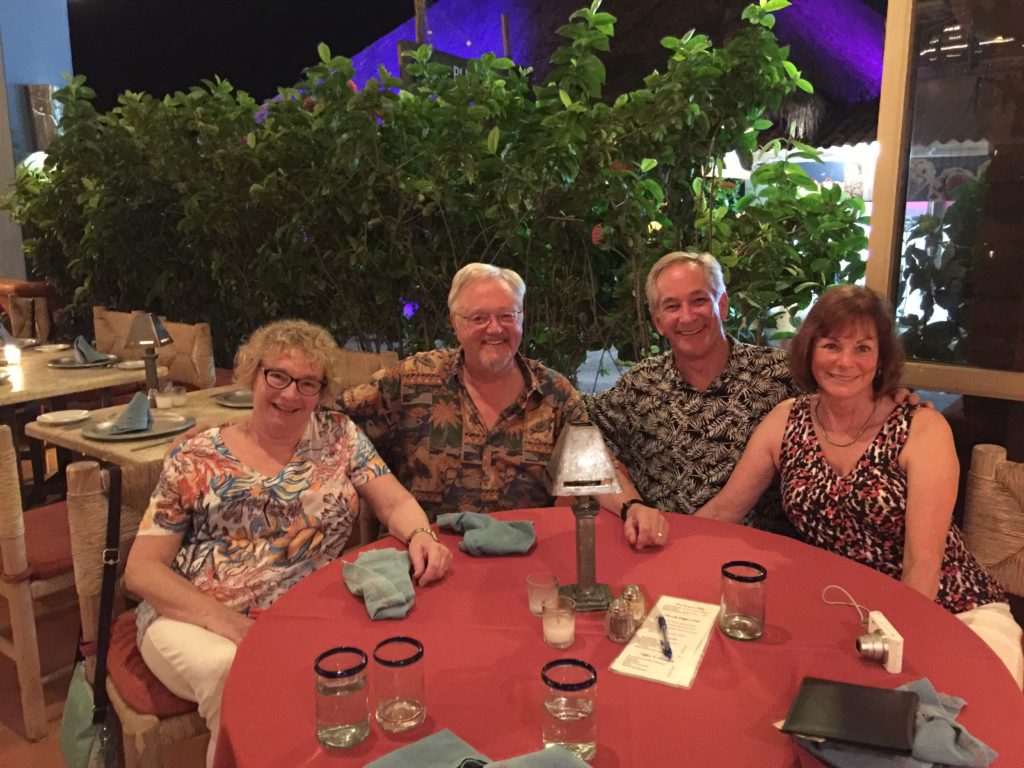 We had visitors earlier this week! My old work buddy, Robert Jones, came to Vallarta on vacation with his lovely friend, Linda Marie. Here we are at dinner with them at Daiquiri Dick’s, a well-known and favorite restaurant on the beach. It was a great opportunity to renew my friendship with Robert, whom I hadn’t seen since I retired.

Well, that´s it for this edition of OnvallartaTime. We are beginning to settle into a routine again. I´ll try hard to get these posts out from time to time. The next one will probably be after Thanksgiving. We´ve once again been invited to our friend Kai´s house in El Tuito, a town up in the mountains about an hour away. Until then, thanks for following OnVallartaTime!