Welcome, all you OnVallartaTimers! The sun is shining, Vallarta is beginning to heat up again (a VERY short winter season this year!) and we are already starting to think about going home.

It’s hard to believe, but we only have a little more than three weeks left in Vallarta this year! What the heck? I know time flies when you’re having fun, but this is ridiculous! As I look back over this season I realize that we really have done a lot. But on the other hand, it seems as if we just got here.

Knowing my track record this year — I’ve been averaging about one post a month — this will be the last post of the season for OnVallartaTime. There’s always next year, God willing. We have re-upped the apartment for the coming year.

Yes, the beach goes on! In the month of February, the highest of the high season, we have had lots of old friends come to town, mostly folks we met on the beach. So of course we have had to endure the hardship (ha) of hanging out at the beach with them… So we’ve been logging lots of beach time. 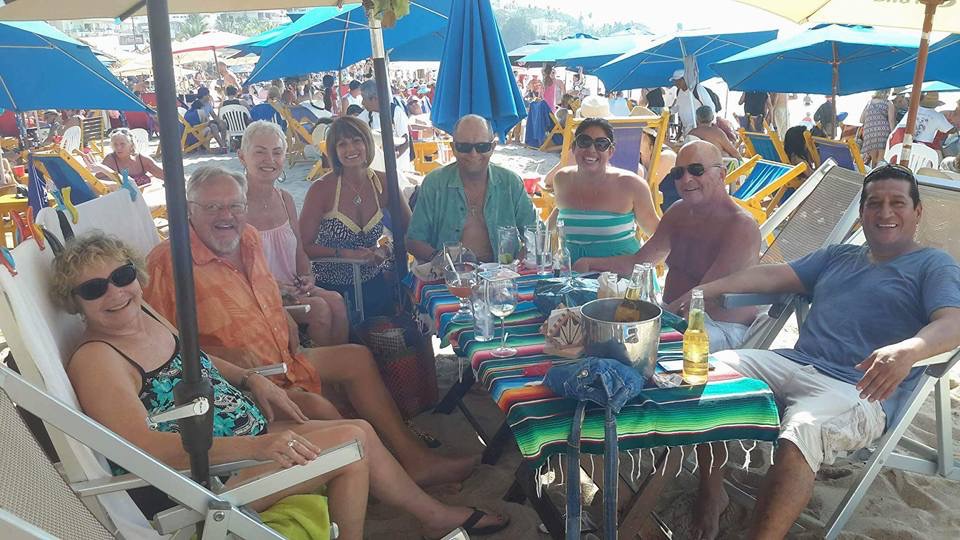 Here’s a group of us on the beach on Valentine’s Day. (Thank you for the photo, Nora!)

We also attended a wedding (well, a commitment ceremony) on the beach in Yelapa, a small town to the south accessible only by water (see post from Feb. 5, 2014). Ronnie Hock, an amazing musician and a member of our ukulele group, tied the knot with Dawn Marie Wilson. Another member of the group, David Barton, who’s says he has “rabbinical tendencies,” officiated. The following are some pictures of the ceremony. 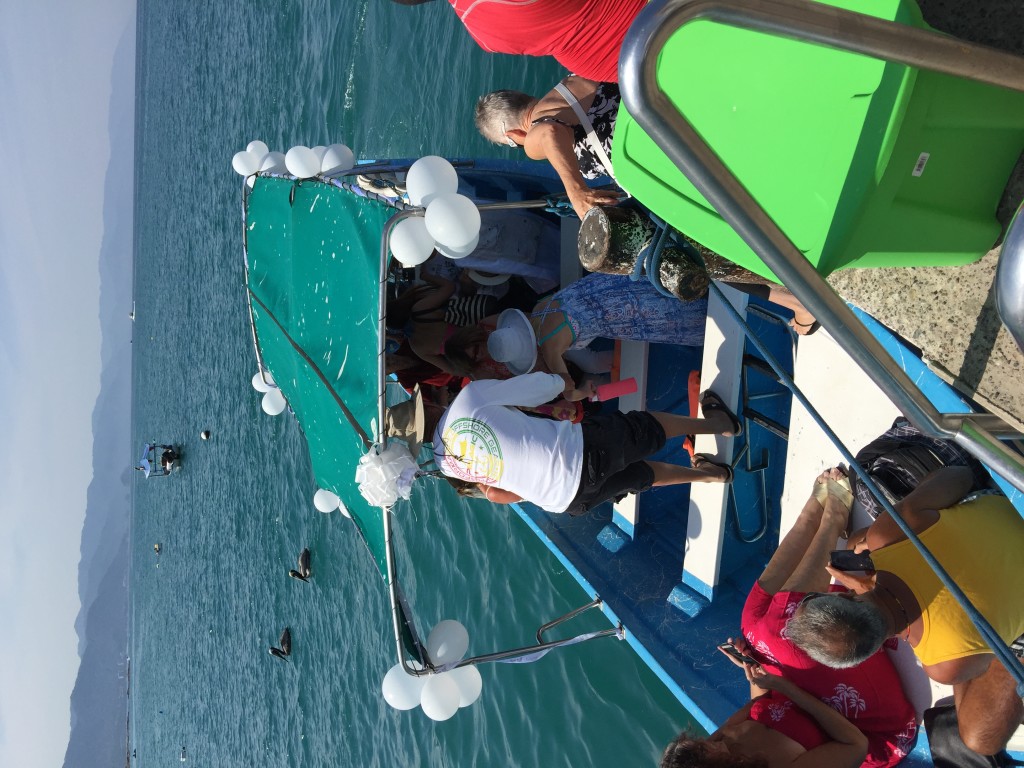 Loading up the decorated water taxi at Los Muertos Pier. Besides the balloons and the pompom, as you can see the pelicans have decorated it, too! 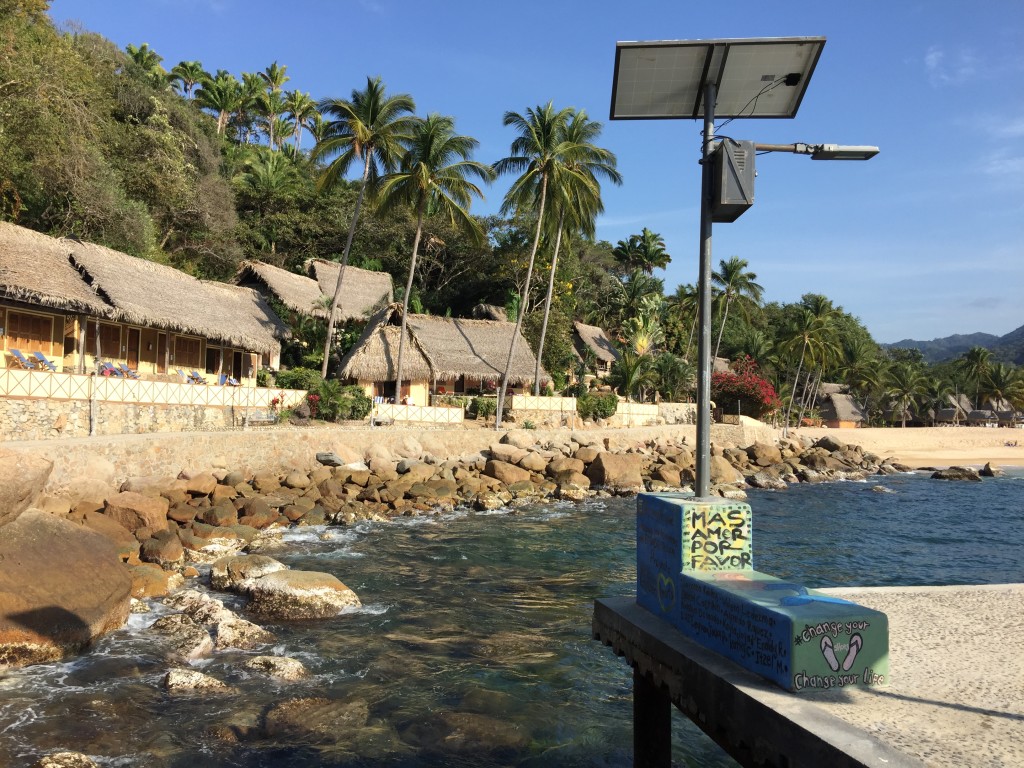 Disembarkation point at the Lagunitas pier in Yelapa. That’s the Hotel Lagunitas in the background. The wedding was back and  to the right along the beach. 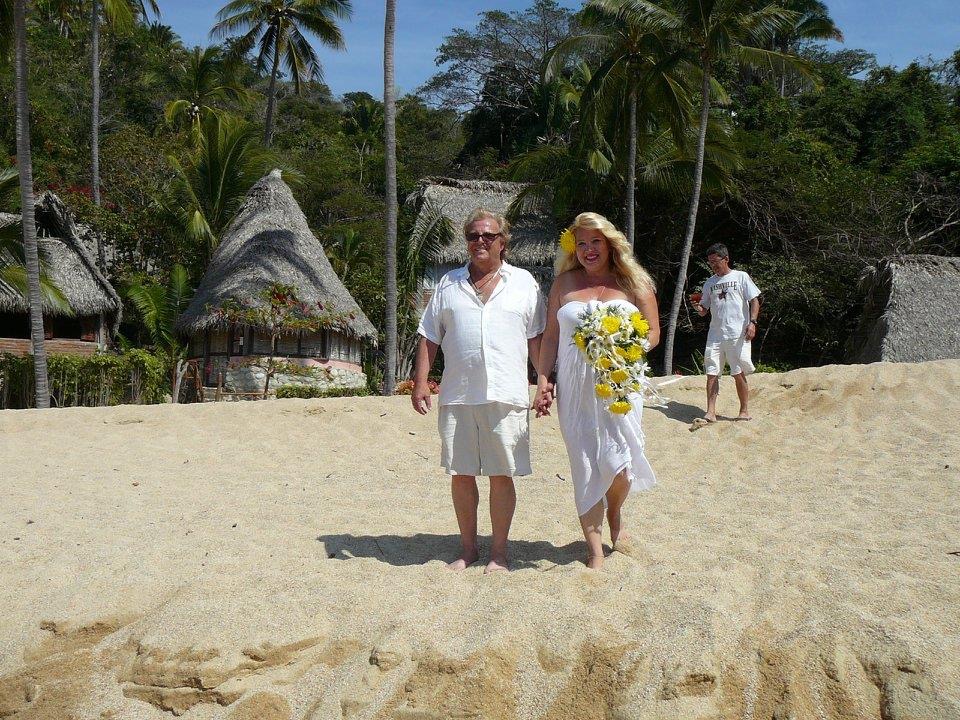 Here come the bride and groom! 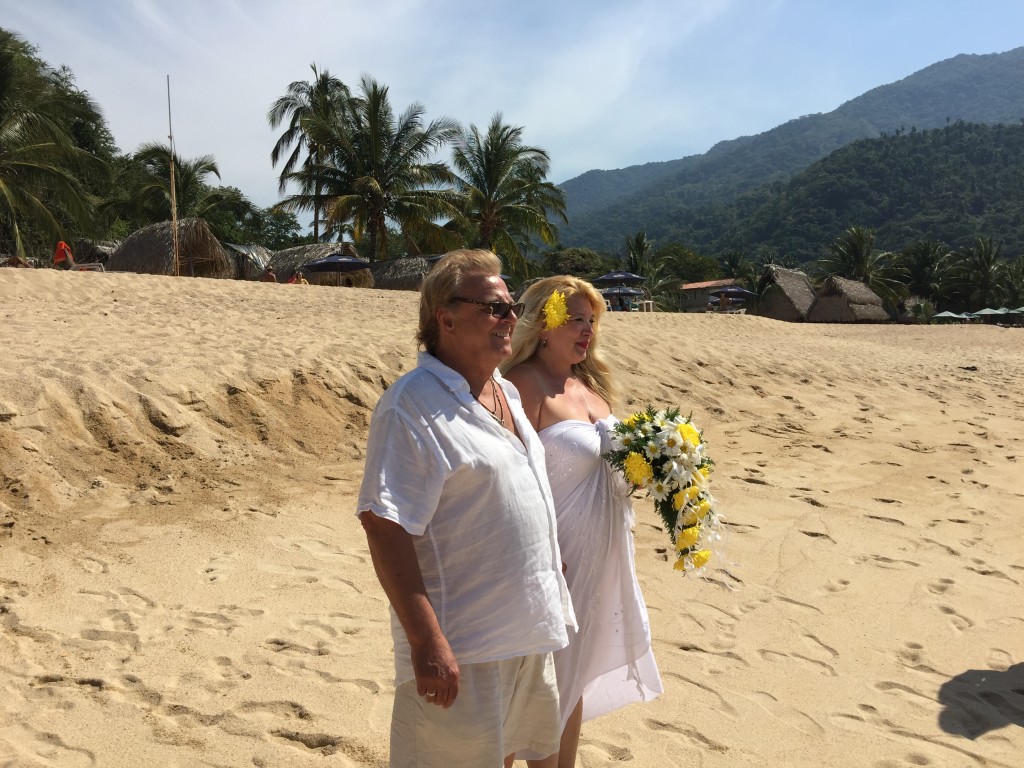 As they pass by… 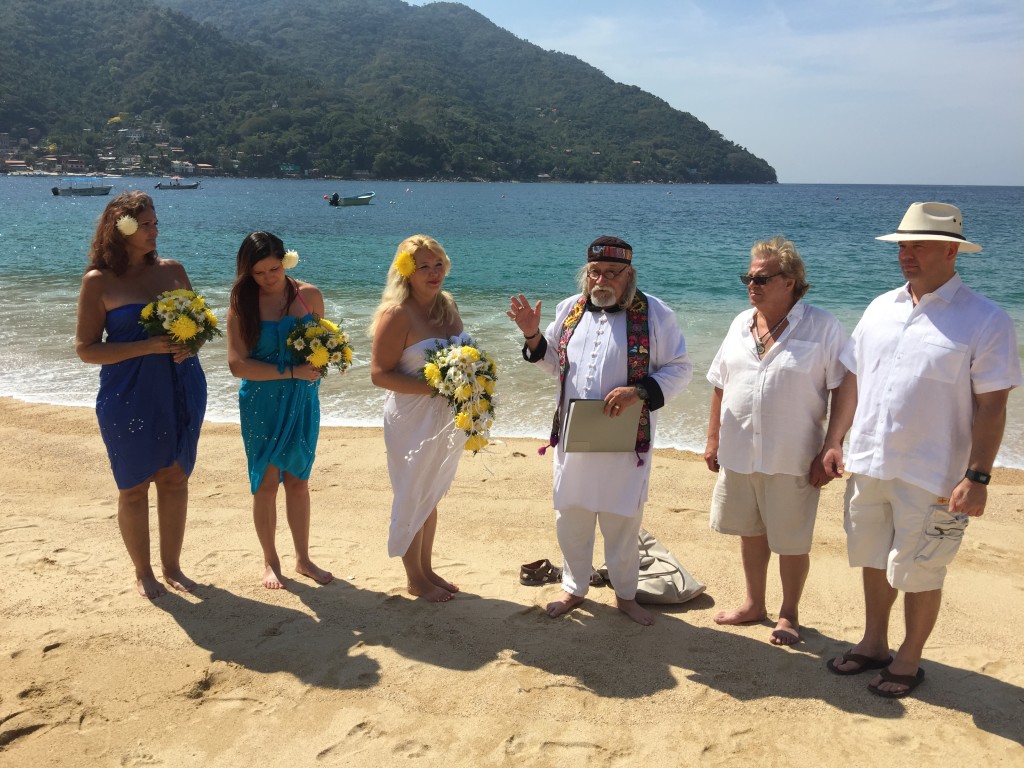 The ceremony on the beach. It was very serious and meaningful; David did  a good job officiating. 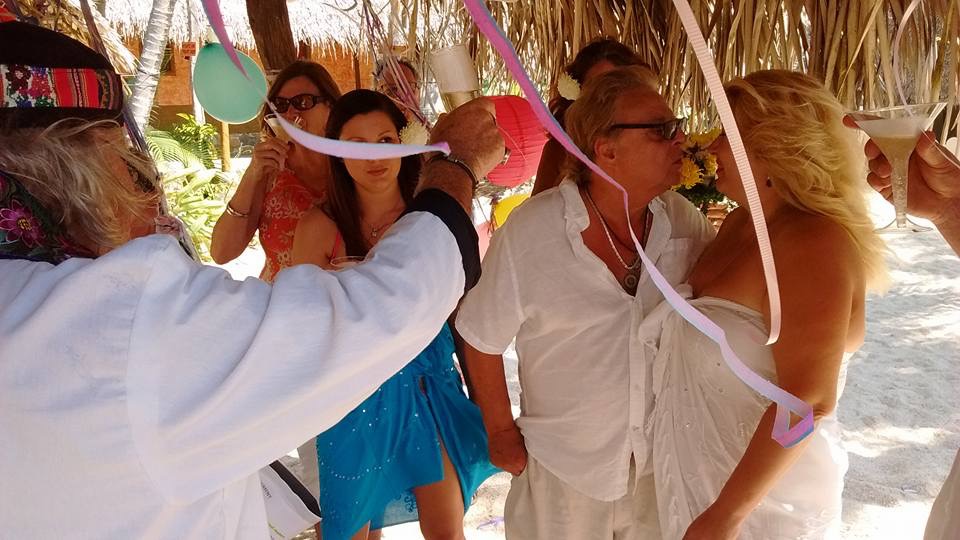 After the beach portion, we all went back up underneath a decorated palapa for the pronouncement and champagne toasts. 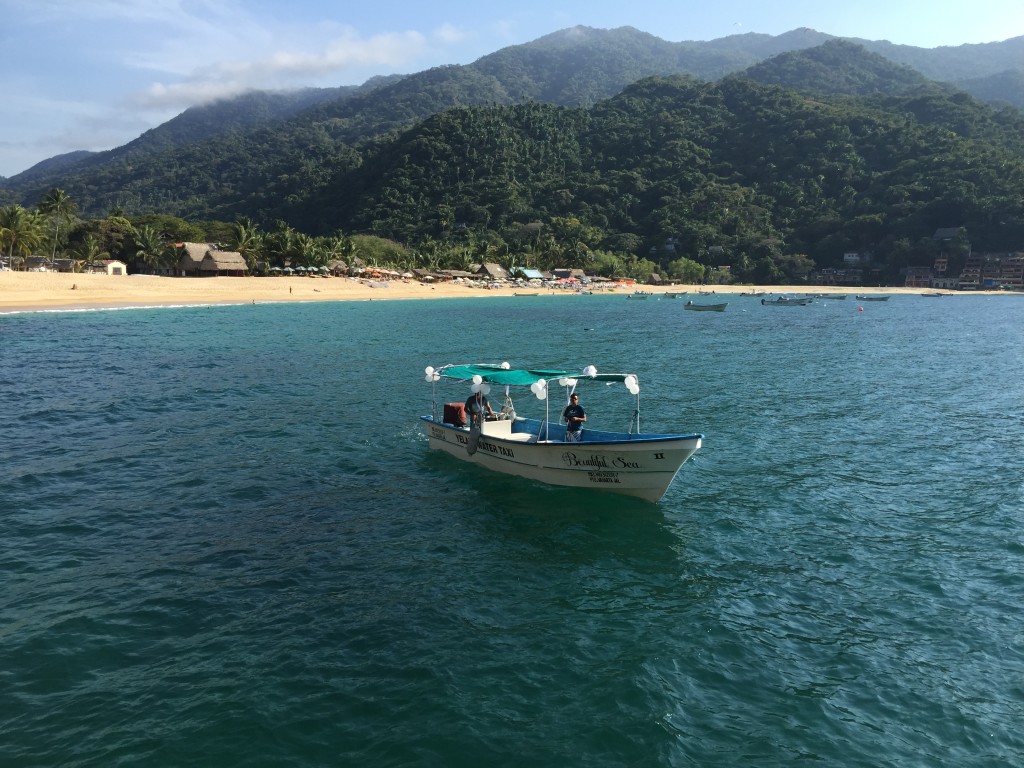 And here comes our ride home!

We have had other visitors, too. My friend Ethan and his wife Carol were in town for their annual visit, and they had visitors, too. We all went out to dinner several times. I met Ethan in 1970, so we have known each other for a long time, but the distance has been great, and we have only kept in sporadic touch since. Imagine our surprise last year to discover from a mutual friend that he and Carol come to Vallarta every year! 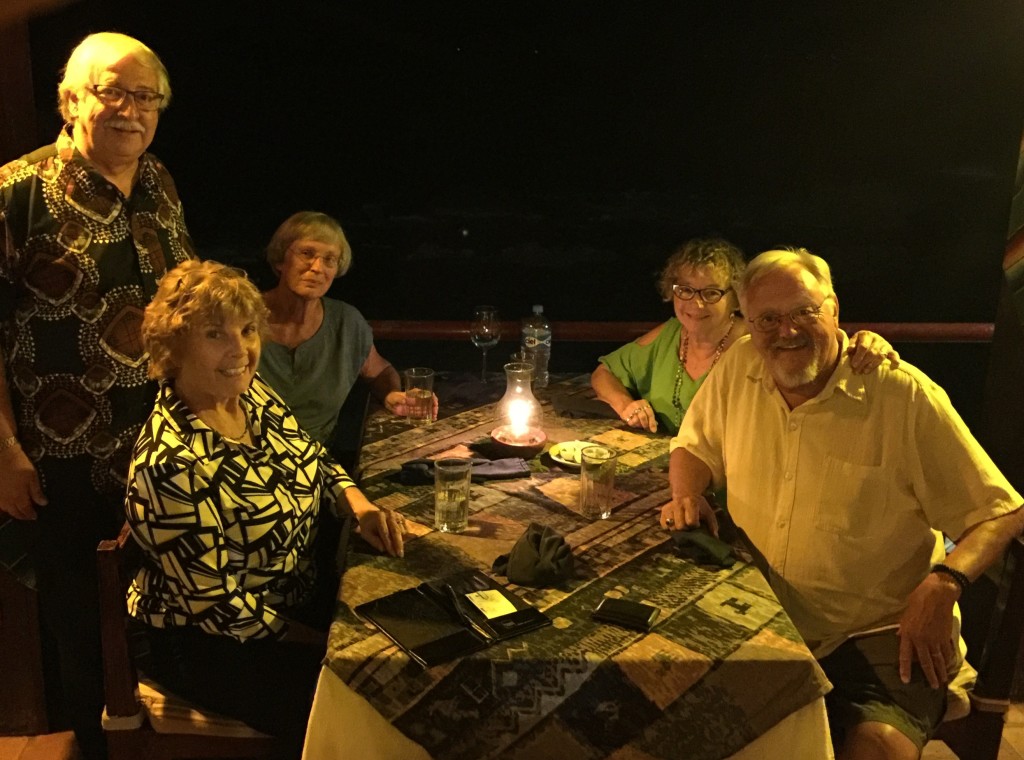 Here we are for dinner beachside at Lindo Mar. Ethan and Carol are back left, across from Peggy. Across the table from me is their friend Jackie Mayer, who was Miss America in 1963. She’s also a stroke survivor and does motivational speaking on the topic. 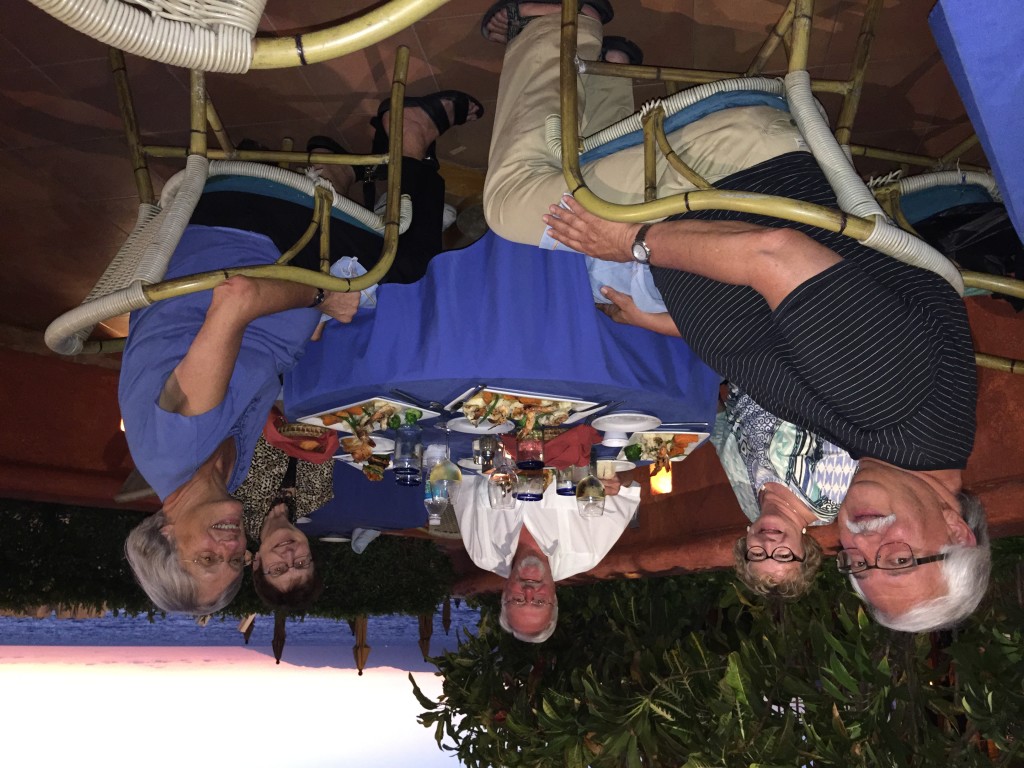 Out with Ethan and Carol and their friend Bess at Daiquiri Dick’s. 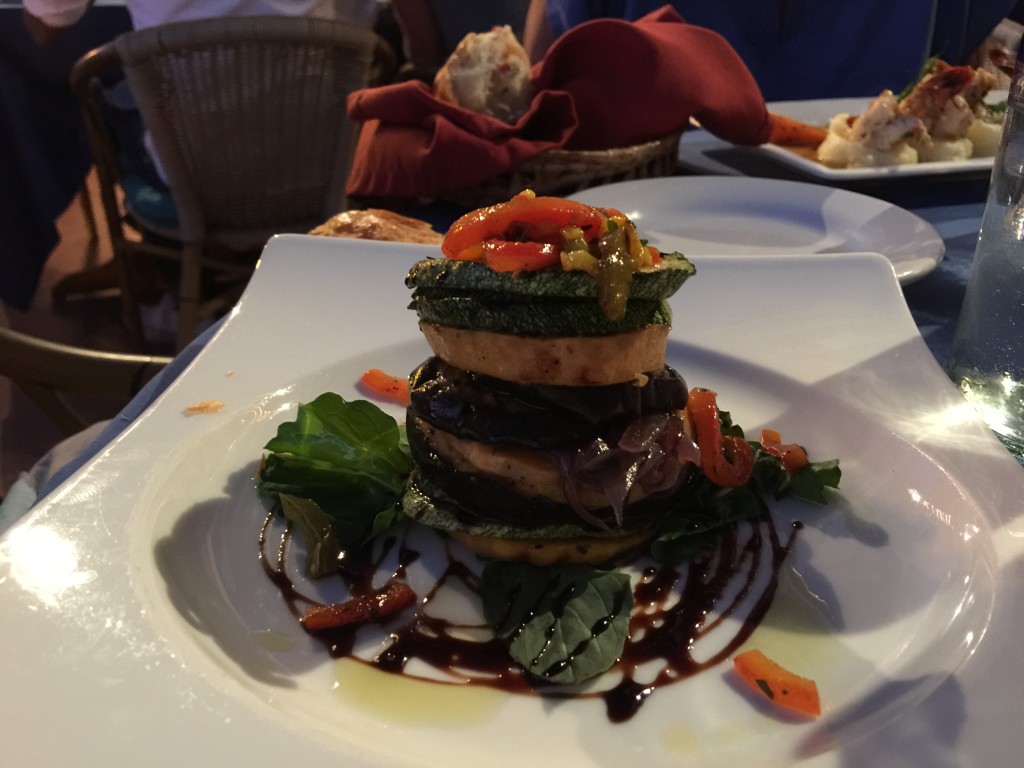 The food at Daiquiri Dick’s is amazing. This is Bess’s vegetable appetizer, which she had as an entree. 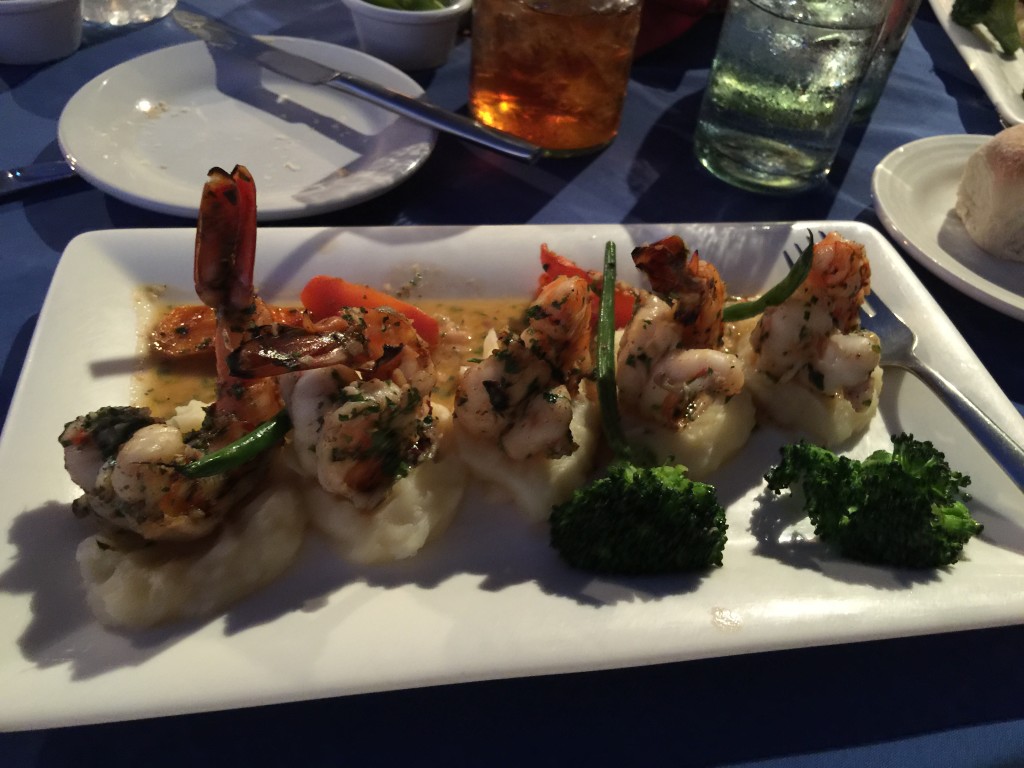 The rest of us had the garlic, butter, and wine sauce giant prawns on mashed potatoes. 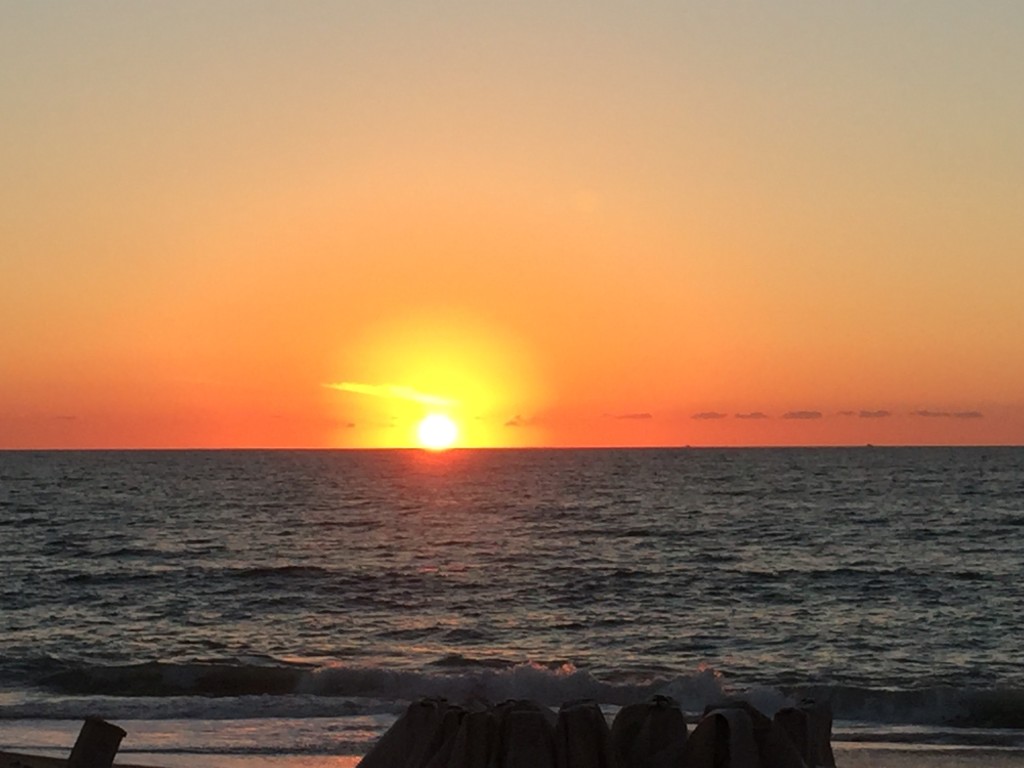 The sunset that night at Daiquiri Dick’s.

The rest of the pictures will be some odds and ends, fun things, some from the “only in Mexico” file. Enjoy! 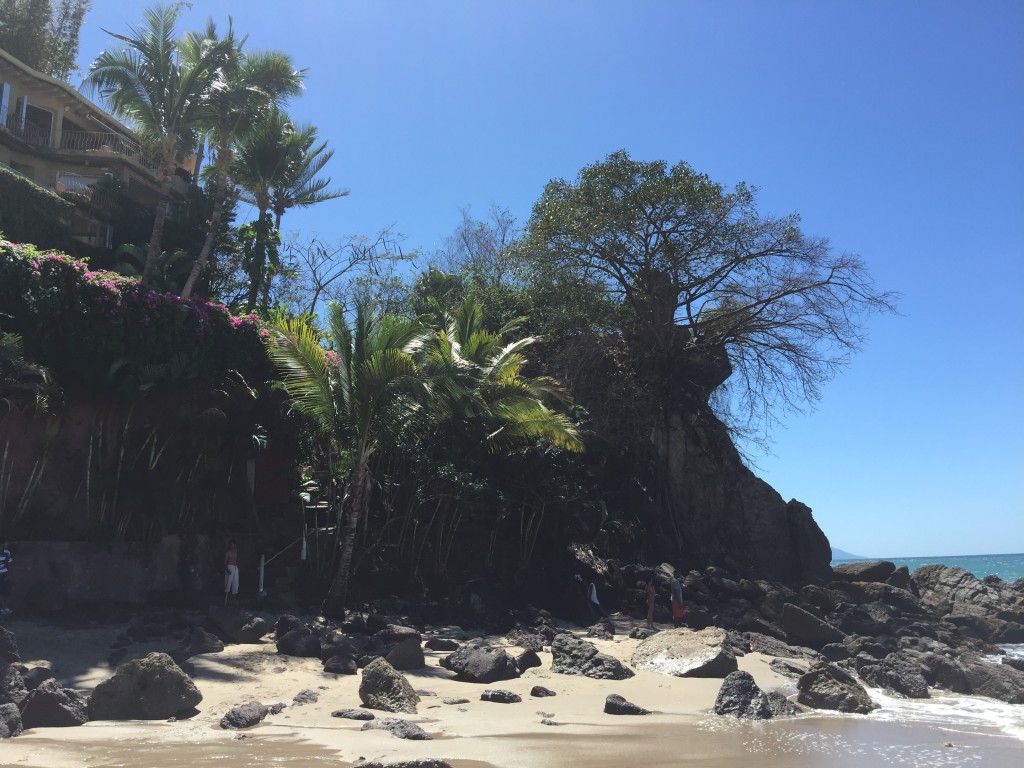 This is the famous Púlpito (Pool pee toe — Pulpit) rock formation that marks the south end of Los Muertos Beach. 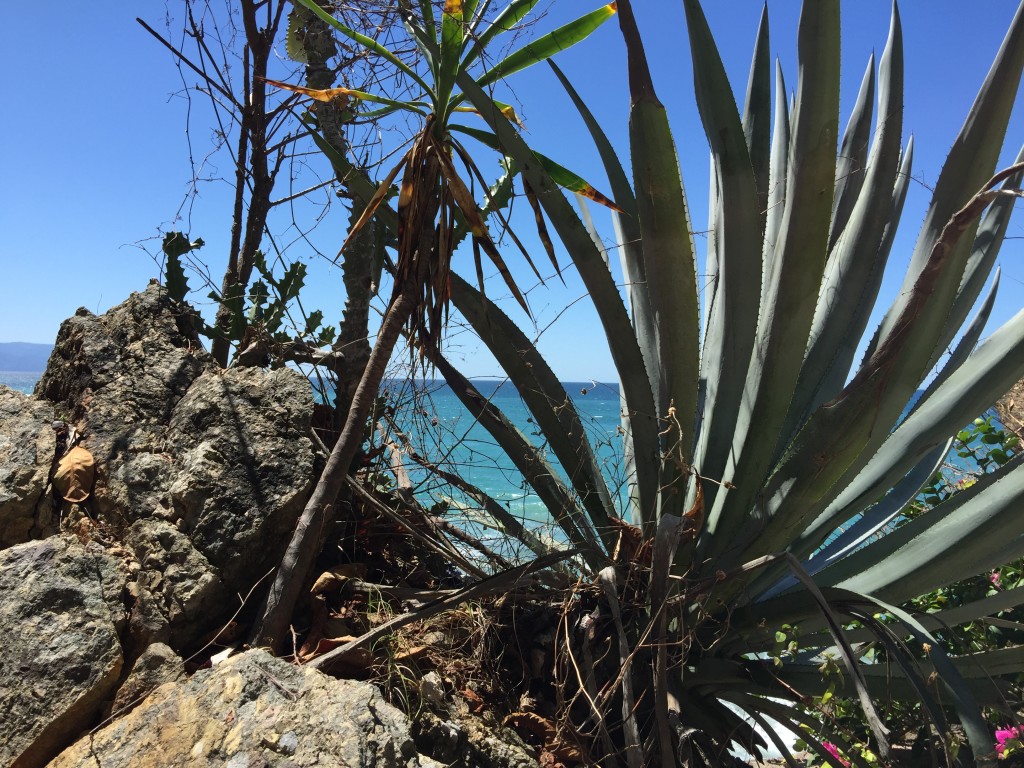 Part of the view from up on the Púlpito. 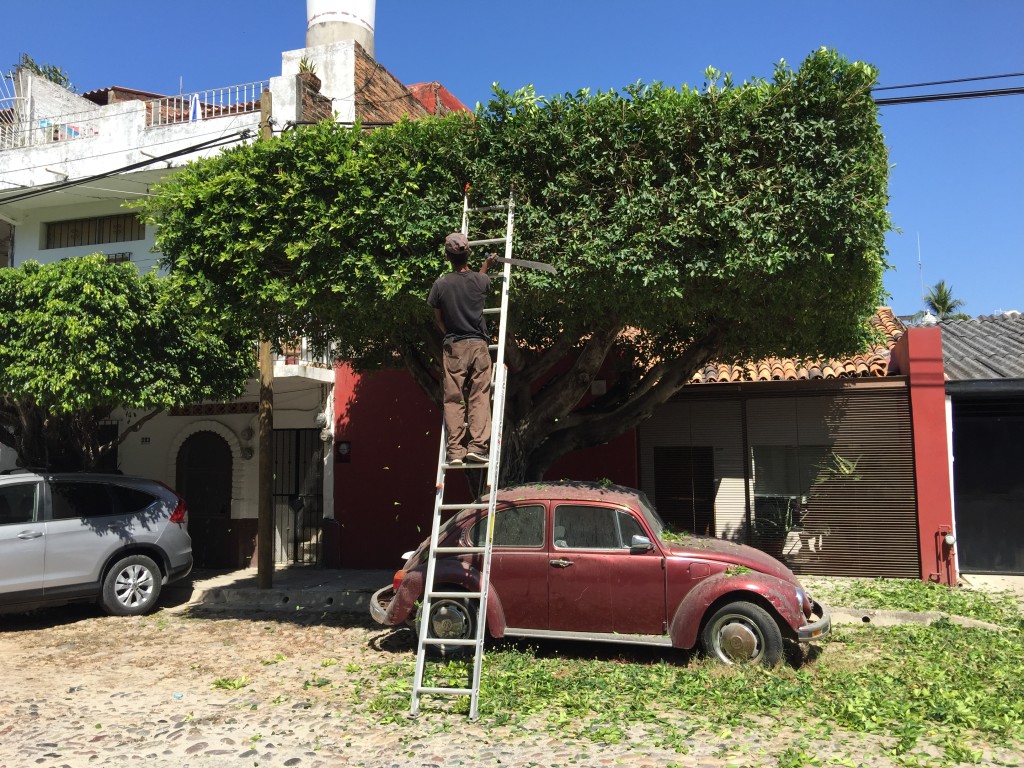 Trimming the trees across the street from our apartment, with a machete! 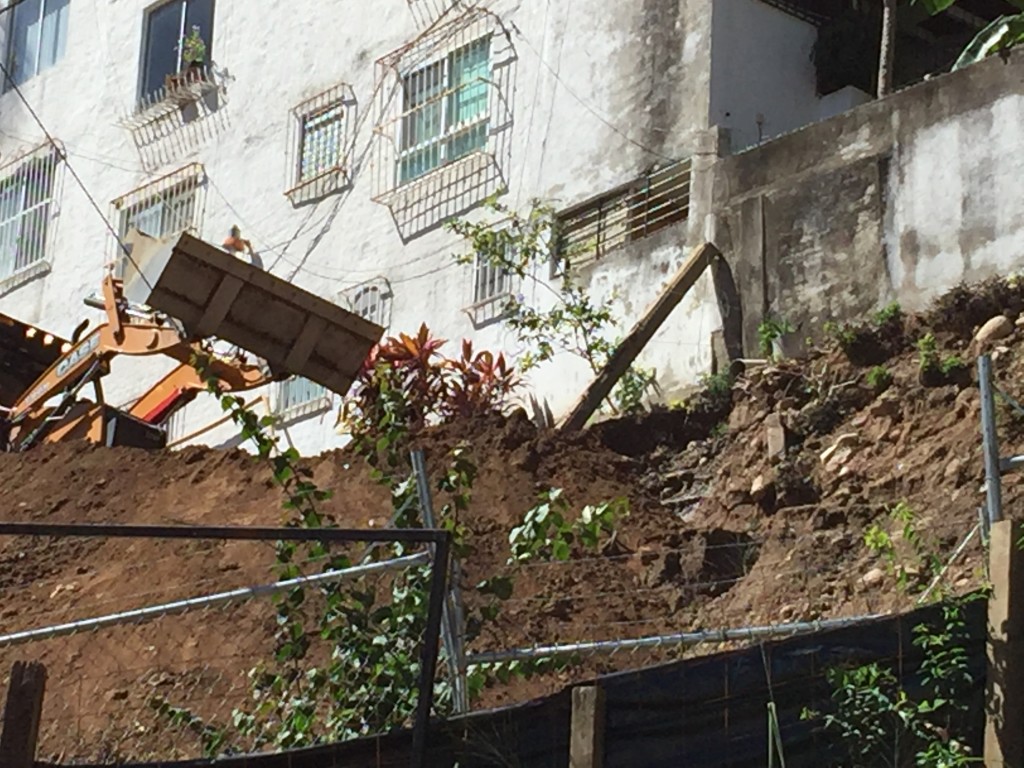 The construction continues down on the corner of our street. It doesn’t bother us much, but our friends live just two buildings away and it drives them crazy. I don’t think it bodes well for the adjacent building if they need to prop up the foundation… 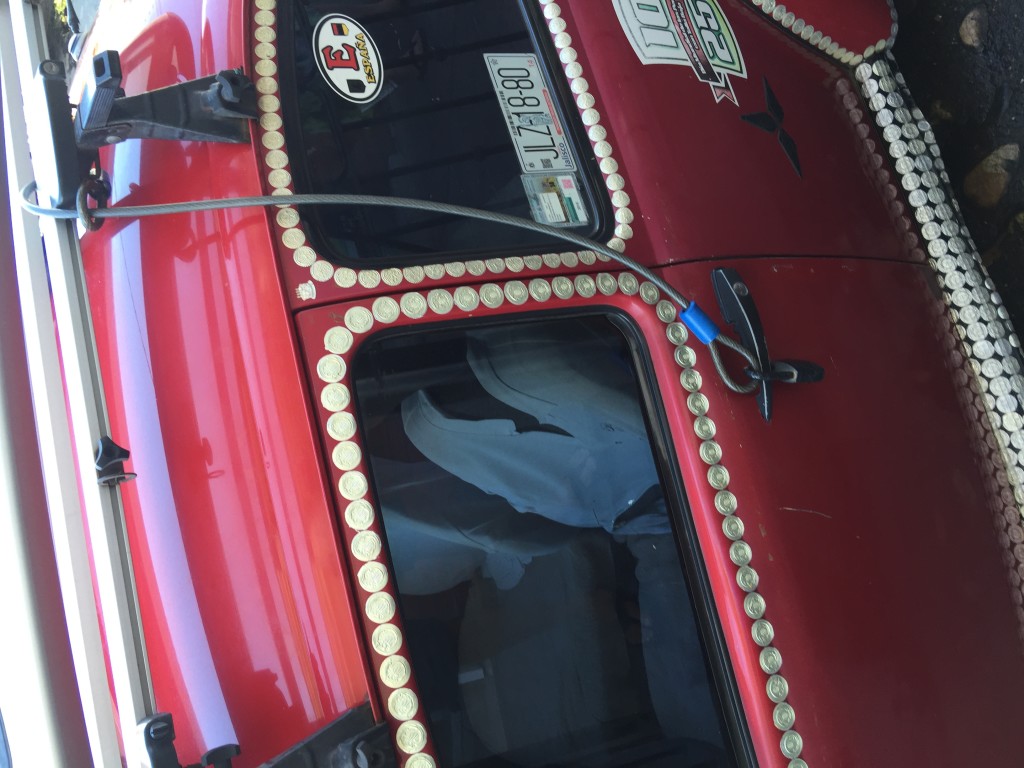 The door lock on a nicely decorated VW. Actually, it looks remarkably like… 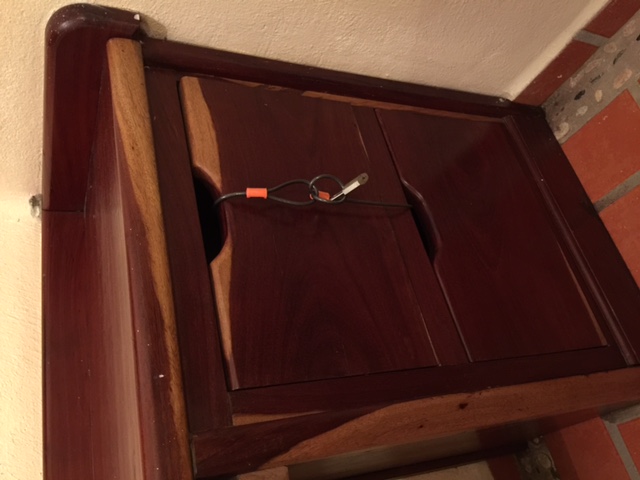 The “safe” in our bedroom, my exclusive design! The built-in desk is ironwood, so it would be pretty hard to break into it without heavy tools, but in reality it’s saying, “Hey! The good stuff is here!” 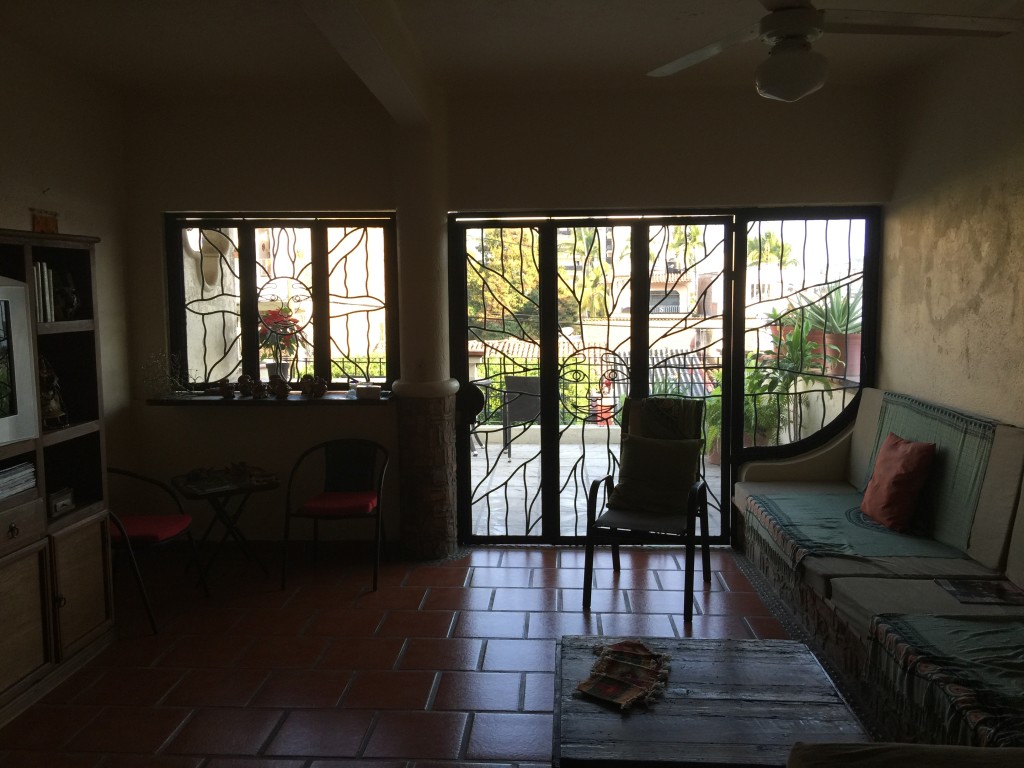 I never get tired of seeing this when I get up in the morning!

Finally, Easter comes a little earlier this year, so we will be here for Semana Santa, Holy Week (Easter week). It’s actually two weeks, the week before Easter and the week after.  It’s a major holiday in Mexico, the schools are closed, and Mexican national tourists flock to the beaches for some long-anticipated end-of-winter vacation fun. A lot of Americans and Canadians avoid being here during Semana Santa, but we are looking forward to seeing what it’s like. All the hotels will be full, the Oxxo convenience stores on almost every corner will do a booming business in beer and snacks, and every grain of sand on the beach will be covered! Here’s how it looked last year on Los Muertos Beach (from Facebook). Wish us luck! 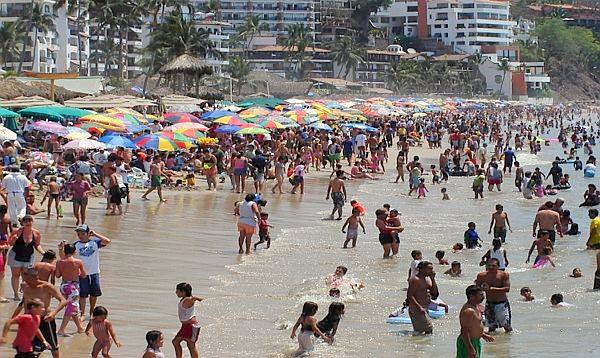 Well, so long until next year from OnVallartaTime! Yes, the beach goes on, and we assume it will be here waiting for us when we get back next year. Now, we head to the same beach, 2,000 miles to the north. I’m hoping to see as many of you as possible over the summer. Bye for now, and thank you for following OnVallartaTime!