Hello, and welcome back to OnVallartaTime! It’s hard to believe, but we have less than two weeks left in Vallarta this year. It doesn’t seem possible; the time has really flown by. We will miss this wonderful place: the friends we’ve made, our comfortable apartment, the street life, the restaurants, the beach, and the weather. Speaking of the weather, this is the view out our terrace door as I sit and type this right now! 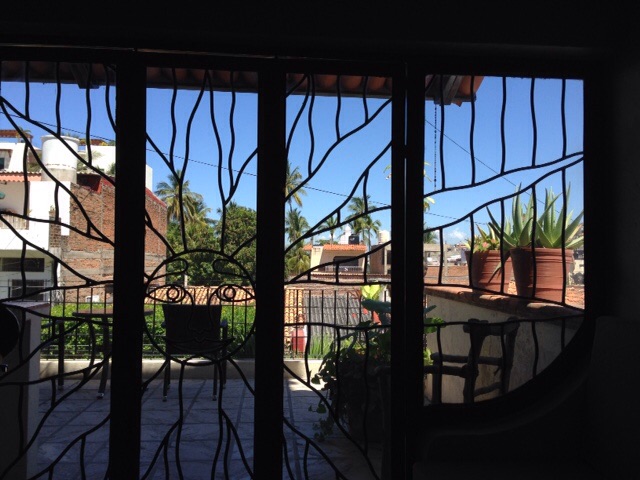 Yes, we will miss it, but we are looking forward to getting back to our new beach house in Lincoln City, too. After all, we only got to live in it for a few months before leaving for Mexico. In Oregon, spring has sprung, even though  some winter weather lingers. It’s cloudy and rainy. Oh no, I’ll have to wear shoes!

In other news, we had a really great visit from my old friend Ethan Shapiro and his wife Carol, who, we discovered through a mutual friend, were here in Vallarta. Even more karmic, they have been coming to Vallarta for vacations for years and we didn´t know it! I have known Ethan since 1970 and had not seen him since one of his visits to Oregon in 1991. Here are Ethan and Carol, on our terrace for happy hour just before they generously took us to dinner at La Palapa. 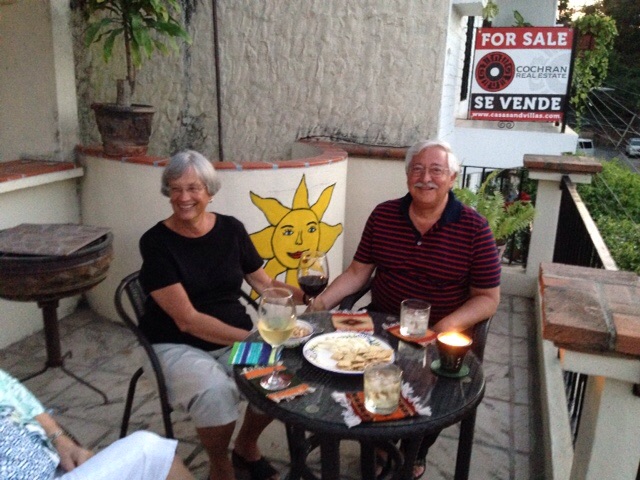 Now to Oaxaca (Wah-ha-ca). At the time of my last post, we were about to leave for Oaxaca for a week, and I promised to show you our trip. Well, we had a fantastic time! It’s really hard to pick from hundreds of pictures, so this will be part one. Next time, before we leave for Oregon, I’ll post part two.

In the fall of 1963, a naive 18-year-old kid from rural Oregon named Greg (that’s me!) was accepted to Lewis and Clark College in Portland. I had also been accepted into a new, innovative program at the college, the Freshman Abroad Program. Before ever living on campus, except to assemble, a group of 21 students, mostly freshmen, shepherded by two professors, headed out for southern Mexico. We took a train from El Paso to Oaxaca, a 3-day trip, where we had a one-month homestay with Mexican families. After that month, we took a bus all around Mexico, and ended up in Mexico City for college classes for two terms, and that’s when I started to learn to speak fluent Spanish, but that’s another story.

My host family in Oaxaca, named Pérez Guerrero, was very kind to me and taught me so much. I visited them again for Christmas that year, and one of the daughters, Susana, and I became close friends. I had had such a wonderful time, and loved Oaxaca so much, that I convinced my family in Oregon (my mother, father and sister Laura) to make the trip to Oaxaca a couple of years later. That was the last time I visited Oaxaca, in 1966, 49 years ago! A few years ago, thanks to the internet, Susana tracked me down and we have been corresponding since.

So I had to go back! After spending so much time in Puerto Vallarta, it seemed like something I needed to complete, to come full circle. As you might imagine, I had no idea what it would be like. Susana was happy we were coming, but how would that meeting feel? And Oaxaca is a big city now, more than doubled in population since I had last visited. Would I still like it?

Well, the answer is, we had a really great time! Sure, Oaxaca had changed, but it was also much the same. Susana met us at the airport, and it was as if no time had passed. Fifty years later, a lifetime past,  but it seemed like nothing more than a blink of the eye. She and her daughter, Carmina, showed us all around. They were so gracious. The whole trip was, in many ways, a dream come true. And now I get to share it with you! 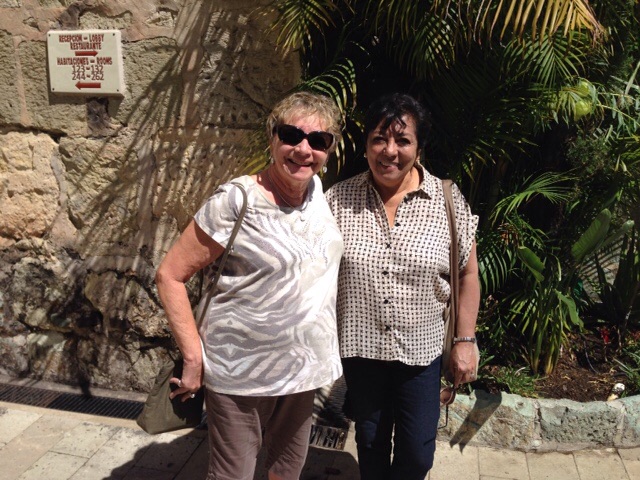 Peggy with my friend from so many years ago, Susana Pérez Guerrero.

First, I’ll show you some pictures of the city. It’s a big city now, with a metropolitan population of 3.8 million. At an altitude of just over 5,000 feet, it’s located in the center of three valleys, surrounded by high mountains. There is a large indigenous population, especially in the nearby towns, making it somewhat exotic. Our hotel was located in the historic center, which is mostly the city I remembered. 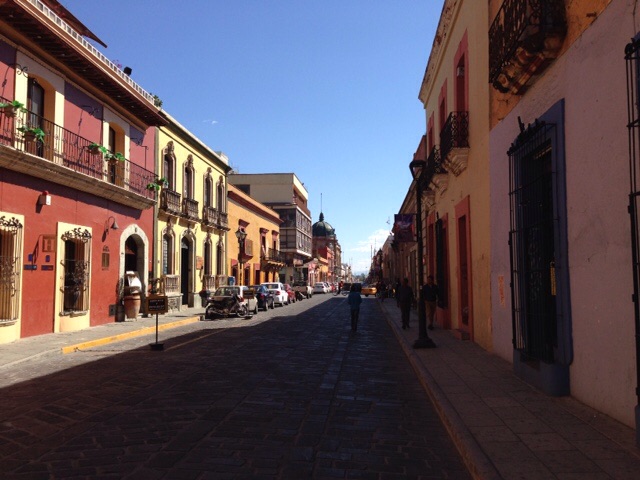 A street in the historic center of the city. The red building on the left is our hotel, the Casa Antigua (old house). Most of the hotels in this part of town are converted private houses. Some were even monasteries. The domed building in the background is the majestic historic theater. 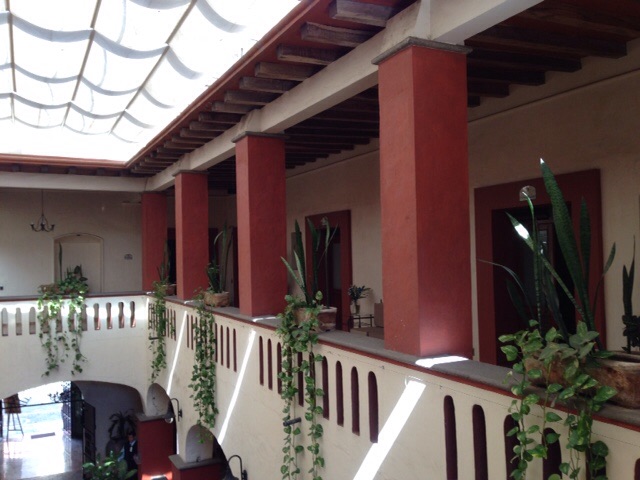 The interior of our hotel, showing the rooms on the second level. 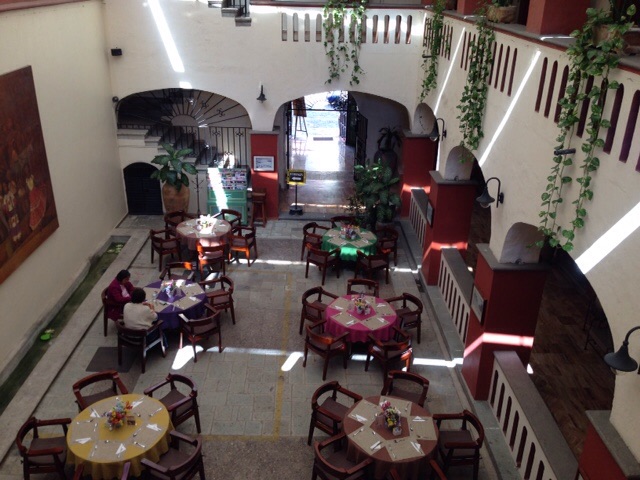 The hotel restaurant used to be the courtyard of the house. Many of the restaurants in this part of town are converted courtyards of historic houses, many now hotels. 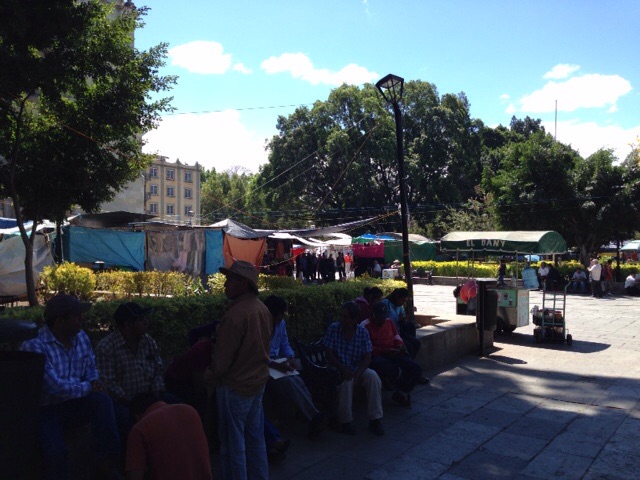 This is the current look of the Zócalo, the town square, which now has a row of makeshift vendors’ booths. It has been occupied since the early 2000’s by the radical teachers union, a sad  state of affairs for most Oaxaqueños, since it used to be such a serene, beautiful place.

This will be a gross oversimplification, but I feel I need to explain the current political unrest in Oaxaca. In the mid-2000’s, the Mexican government passed some educational reforms to help counteract the what was seen as the dismal record of public education in the country, which lagged behind much of the rest of the world.  As part of the reforms teachers had to prove they knew their subjects. The teachers union, especially the local in Oaxaca, is very strong, and like many Mexican institutions, somewhat corrupt. Teachers have to buy their positions from the union, and don’t feel they should now take a test to keep their jobs. In addition, Oaxaca, being a poor state, has very low wages which compounds the situation, giving the teachers a legitimate argument. Because the schools are often closed, those who suffer the most are of course the children, and it’s discriminatory against those who can’t afford private school.

When the government attempted to implement the reforms, the teachers took to the streets. In 2006, the demonstrations turned violent when the state government forcibly cracked down, and there was open warfare between the demonstrators and government forces. To this day, there are serious demonstrations, with masked individuals spraying graffiti and destroying property. Blockades of major highways are an almost daily occurrence, in which the demonstrators commandeer buses, kick off the passengers and use the buses to block major roadways. When we left Oaxaca, we had a 1:30 PM flight, but had to leave the hotel for the airport at 8:30 AM in case of a blockade. This is now a part of life in Oaxaca.

Tents of the occupiers in the Zócalo.

This building was partially burned out by teargas bombs during the troubles in 2006. Most of this kind of damage has been repaired, but some remains.

I don’t mean to make it sound terrible; it’s not, really. We hardly saw any of this, except the more obvious public effects. Oaxaca remains beautiful and a great place to visit. It’s just that if I’m going to show you Oaxaca, I have to show you this part, too. 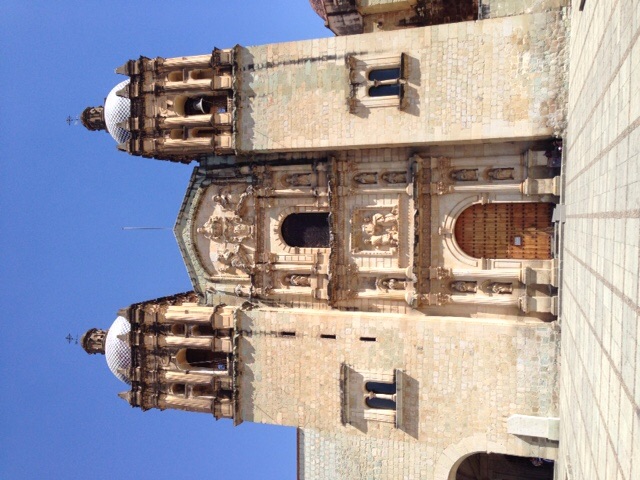 Templo de Santo Domingo, attached to a former Dominican monastery, which is now a museum. It’s a famous landmark in Oaxaca and a major tourist attraction. 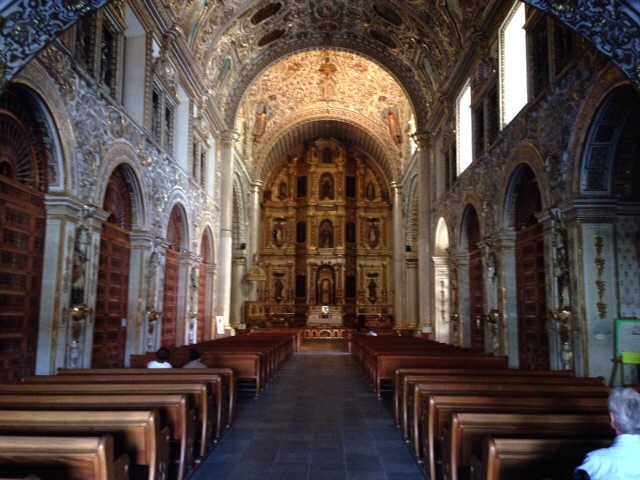 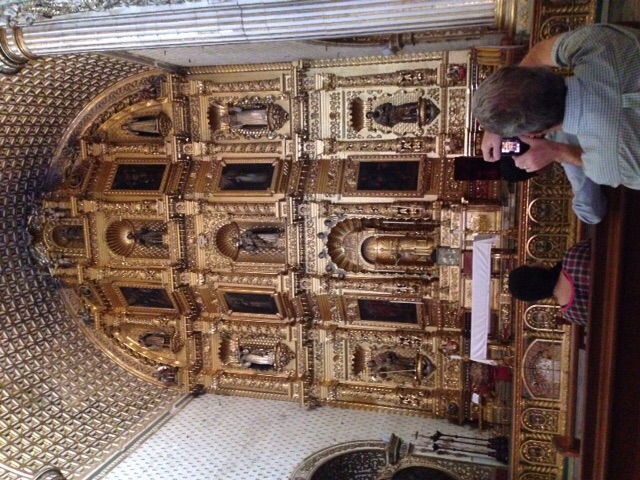 The altar area. Everything here is carved wood overlaid with gold leaf. Somebody photobombed me – #$%& tourists! 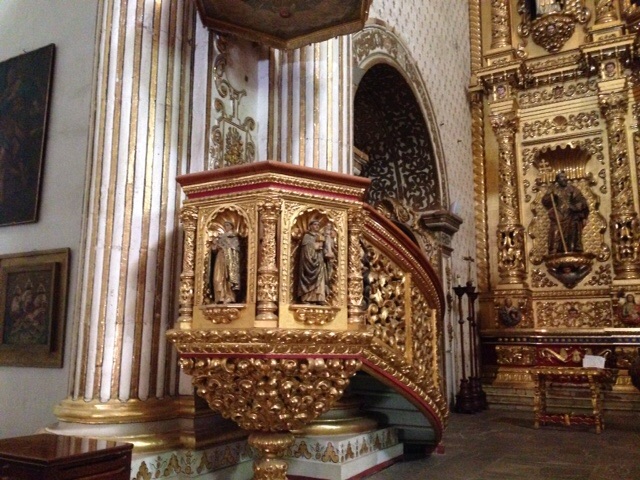 A section of the ceiling in Santo Domingo. 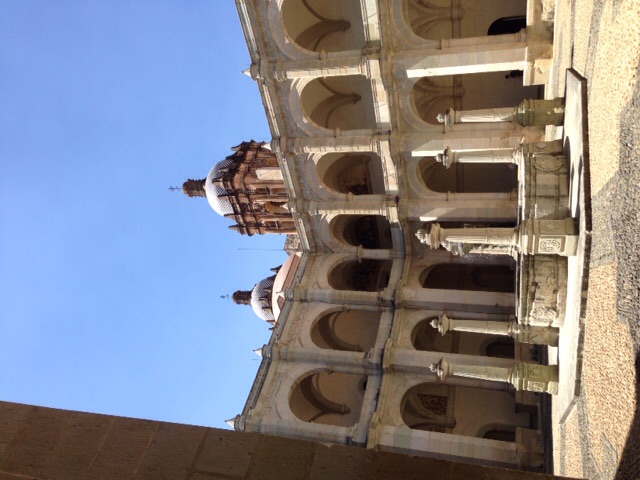 This is a central courtyard of the former monastery attached to Santo Domingo, now a museum. Those are the twin spires of Santo Domingo in the background. That slab of stone on the roofline in front of the spire on the right is a solar clock.

We walked through another former monastery, now a hotel. These are the basins where the nuns used to wash their clothes. I suppose they made a habit of it! 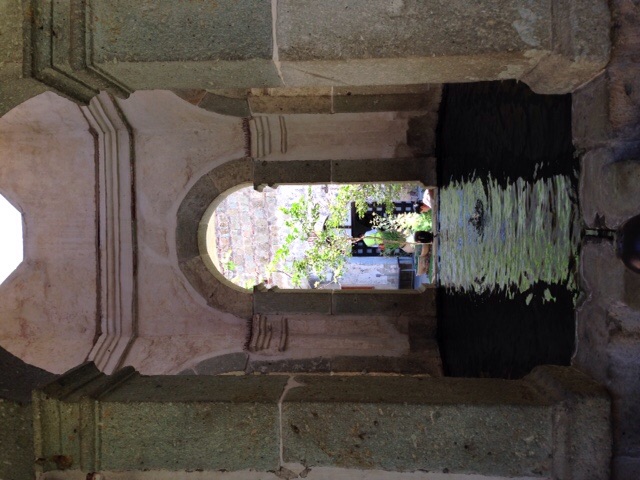 The fountain attached to the basins. 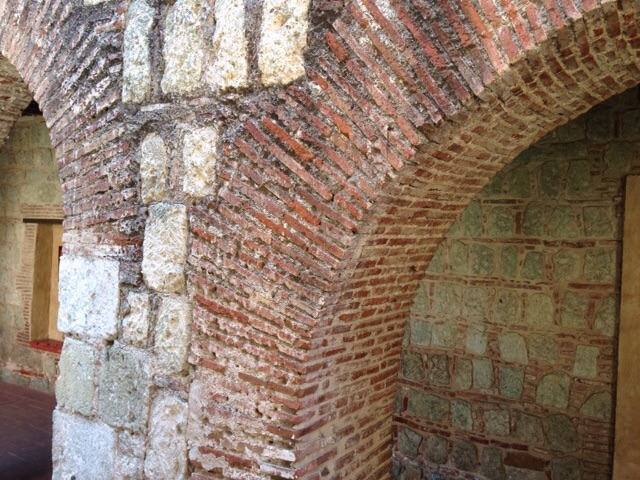 A section of wall showing the original construction of the monastery in the 1500’s. It’s a mixture of brick and cantera (quarry) stone. Much of historic Oaxaca is made of this gray-green stone: public buildings, the sidewalks and even the streets.

Peggy and I took a tour of Monte Albán, a Prehispanic cultural and religious center built on a mountain high above Oaxaca. The first planned urban center in the Americas, originally built around 500 BC, it was largely abandoned after about 850 AD, although used for ritualistic purposes until the time of the Spanish conquest in the 1520’s. Usually termed “pyramids,” the temple complex, which has been largely cleared of vegetation and partially reconstructed, is actually a series of temple platforms. When in use, wooden temples were constructed on top of the platforms, and the rock walls and steps were covered with stucco and painted bright colors. Although huge and impressive now, it must have been magnificent in its heyday. 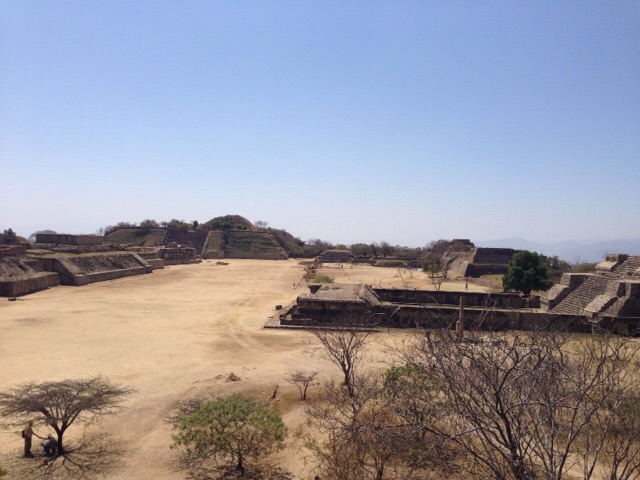 A view of the Monte Albán temple complex from the hill above.

A shot of one of the larger temple platforms. 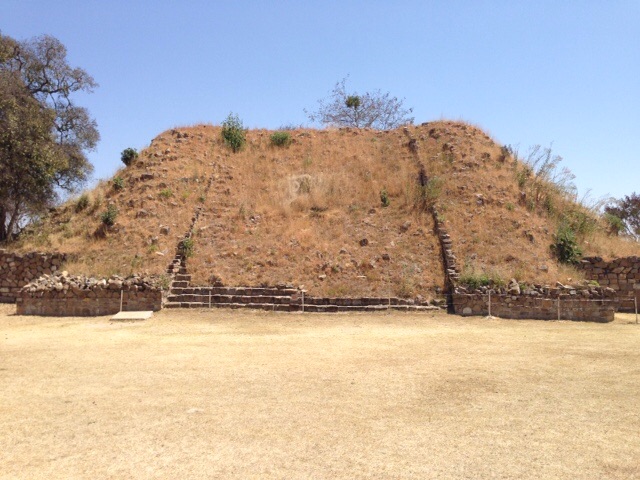 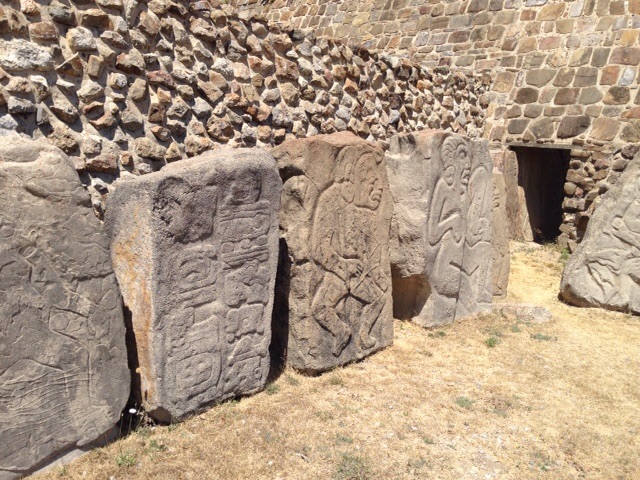 These carved stone figures are called Los Danzantes, The Dancers, but a group of medical doctors visiting the site soon after excavations began determined that the figures actually represent people who are in distress due to various injuries or illnesses, possibly making this the first known hospital in the Americas. 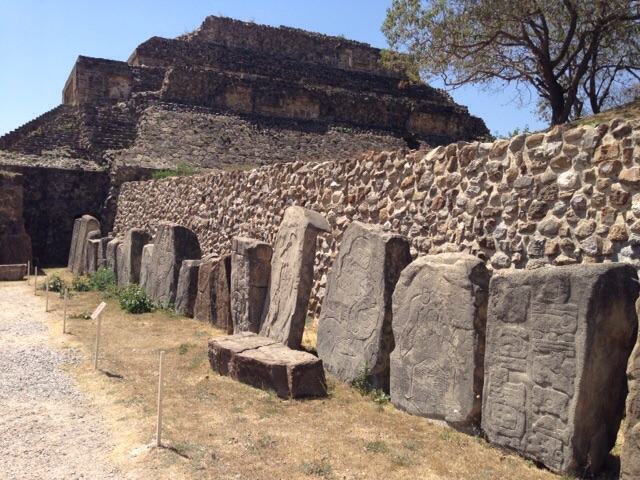 Another photo of “The Dancers.” 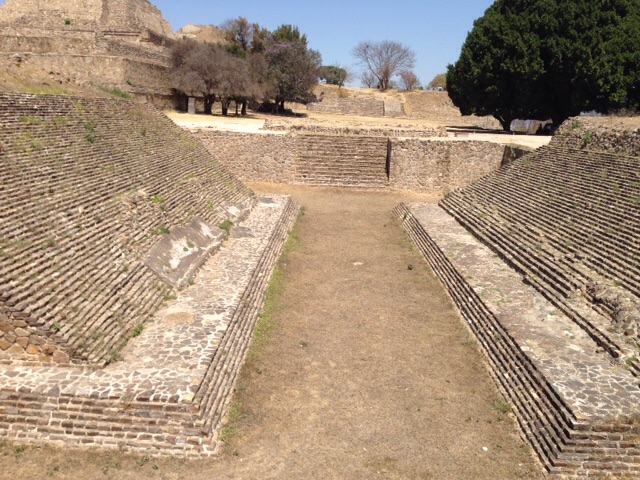 The ball court, where a game using a rubber ball was played. The game had ritualistic significance and was used to decide disputes.

From Monte Albán looking down towards Oaxaca in the valley far below.

Back in this century… We did a lot of shopping on this trip, going from shop to little shop looking at the incredible array of handcrafted goods. We even bought some stuff! 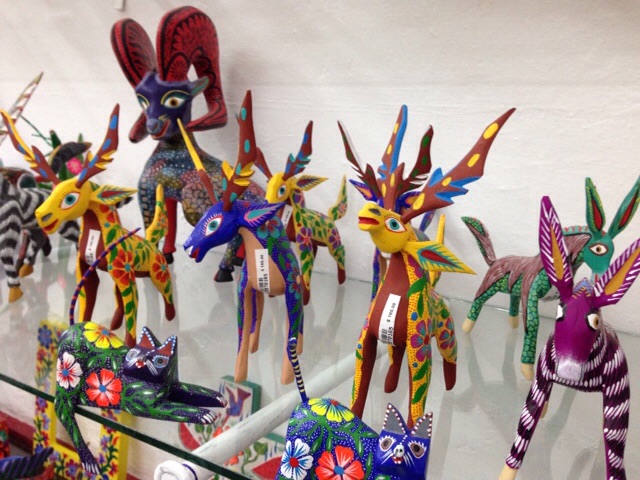 As an example of handicrafts, these are alabrijes (ah-la-bree-hehs), indigenous carved and painted wooden figures, many times in fantastic shapes, influenced by the ritual use of hallucinogenic substances. 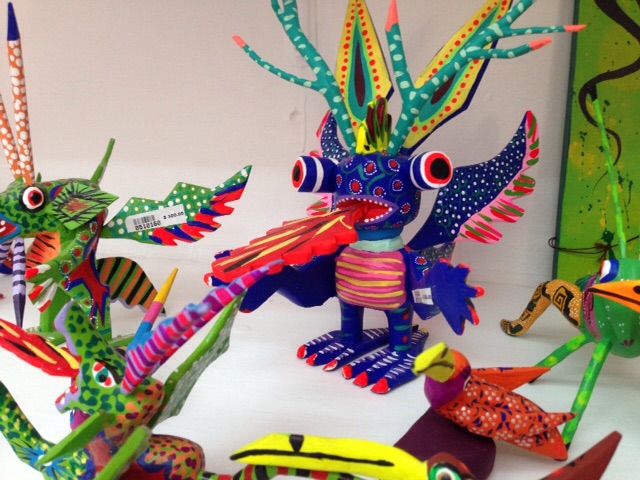 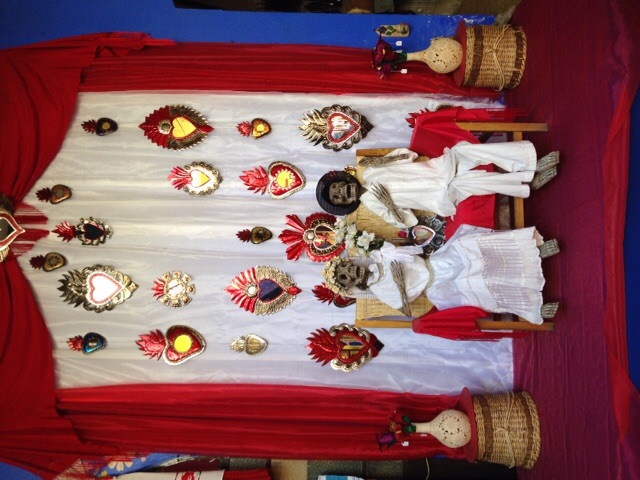 Life-size figures in a shop. 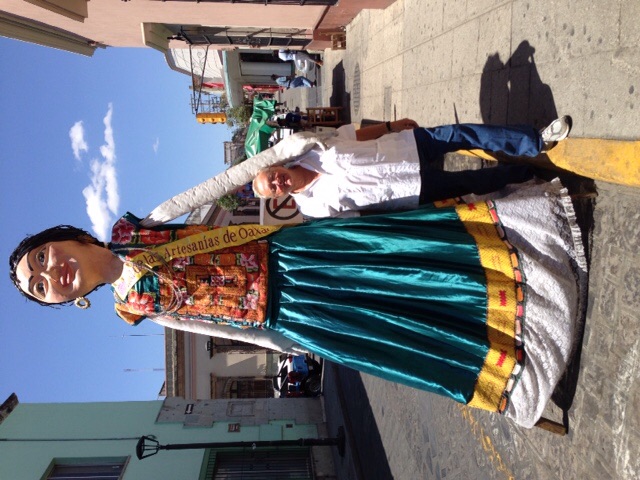 Me with my giant girlfriend in front of a handicraft shop. 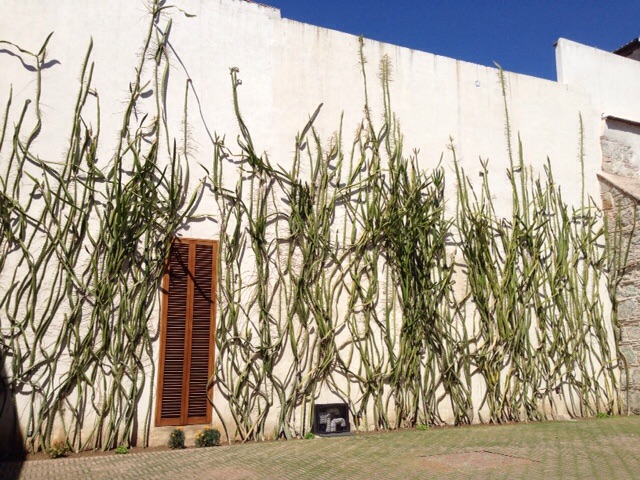 Did you know there was such a thing as climbing cactus? Me either.

One of the highlights of the trip (for me anyway) was that Susana took us to her old family home, the one I stayed in during my homestay, where her mother still lives. The house is still the same, and it was like being in a time machine. Her mother is now 98 years old, and still completely lucid. She remembered me well and was very glad I had visited. 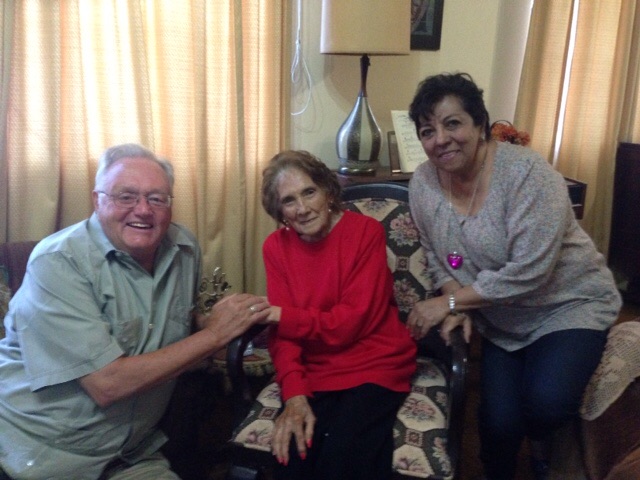 Here I am with Susana’s mother, Maria Teresa Zamora vda de Pérez Guerrero, and her daughter and my friend, Susana. 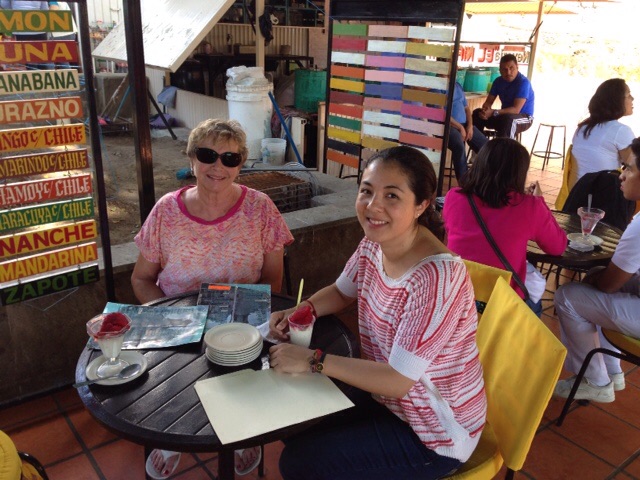 This is Peggy with Susana´s daughter, Carmina Spindola Pérez Guerrero, at an ice cream stand at the square near the Basilica de la Soledad, next to City Hall. 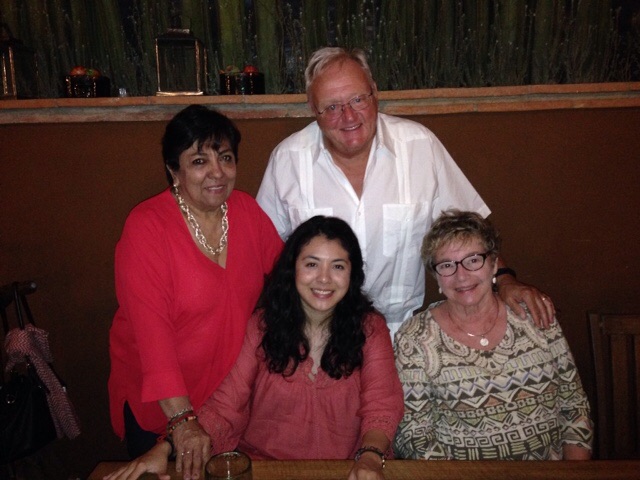 Finally, here we are out to dinner: Susana, Carmina, Me and Peggy.

That’s it for this edition  of OnVallartaTime. Hope you enjoyed it! Until next time, part two of our trip to Oaxaca — the markets!