Hello and welcome back to OnVallartaTime! This post will be full of pictures of  Basilio Badillo Street, also known as “The Street of Restaurants,” or Restaurant Row. But first, this is what we’ve been doing since my last post just before Christmas.

So, what have we been doing? The answer is, not much! Retirement is so great. We’ve been lazing on the beach of course! In between, we had a great Christmas Eve with friends at Daiquiri Dick’s restaurant, where I got to sing along with Jorge Acosta, one of my favorite Puerto Vallarta singers. For Christmas dinner, Peggy and I went to Vitea, a great restaurant on the Malecón, with gourmet food and incredible people-watching, where we got a pretty good view of the display that kicked off the International Fireworks Festival.

The theater scene being as great as it is on Puerto Vallarta’s south side, we have been to a couple of productions. The first was the Kinsey Sicks for their holiday show, “Oy Vey in a Manger,” what a hoot! We also saw “Walk Like a Man,”  inspired by “Jersey Boys,” a tribute to Frankie Valli and the Four Seasons. This show was sung by Paul Fracassi, winner of The Voice in Canada. He hit those essential falsetto notes perfectly. Then on New Years Eve we went for dinner with a big group of folks to another great restaurant, Bravos, followed by drinks at a rooftop bar. We made it home in time to watch various fireworks at midnight from our deck.

Now on to the subject of this post.  Calle (street) Basilio Badillo is one of the most commercially important streets in Old Town, or the Romantic Zone, South Side Puerto Vallarta. It has been known as Street of the Restaurants (Calle de los Cafés) for quite a few years although it’s also home to many upscale shops, boutiques, galleries and jewelry stores as well, all of which cater mostly to tourists, expats and wealthier Mexican nationals and tourists. 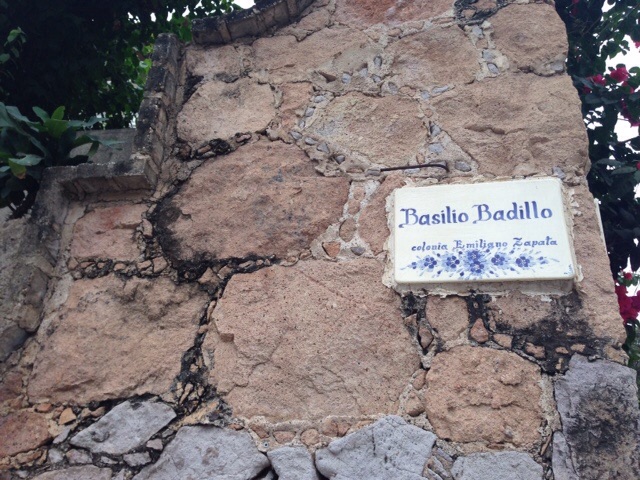 The street is named after Basilio Vadillo (yes, the name of the street is a variant spelling, pronounced the same, ba-dee-yoh). Vadillo was a Mexican educator, revolutionary and, briefly (1921-22), Governor of the State of Jalisco. During his tenure as Governor he signed the communal land grant establishing the city of Puerto Vallarta, so they named the street after him.

For our tour, let’s start east of Insurgentes Street, where Basilio Badillo is still in a very normal Mexican heighborhood. From this point east, the street is part of old Highway 200 through town, and it leads directly to the highway north. The street gets more touristy the more west you go, towards the ocean. 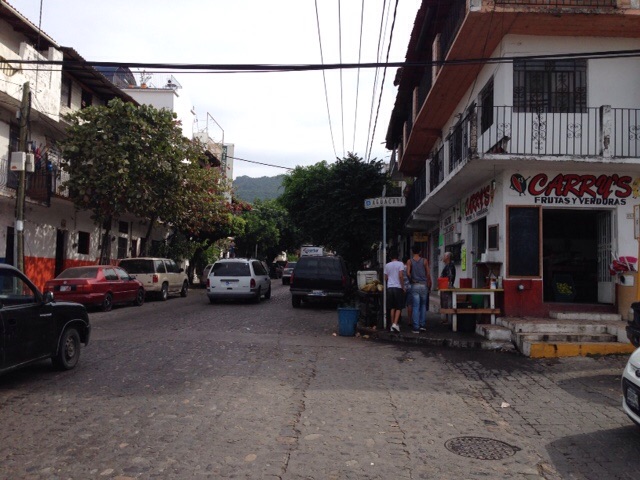 A shot to the east, toward the highway. 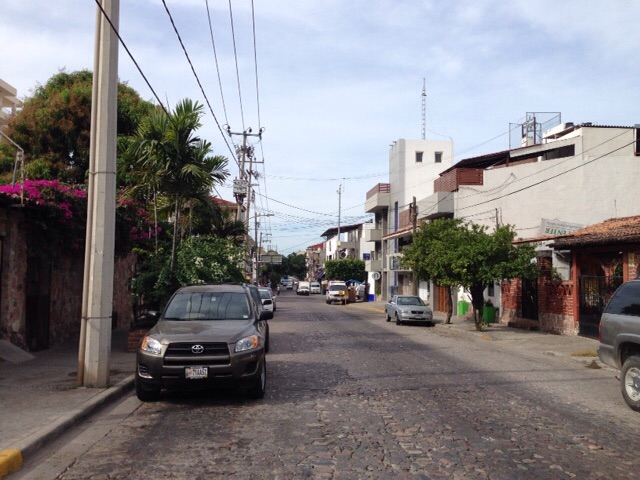 Heading west toward the ocean. 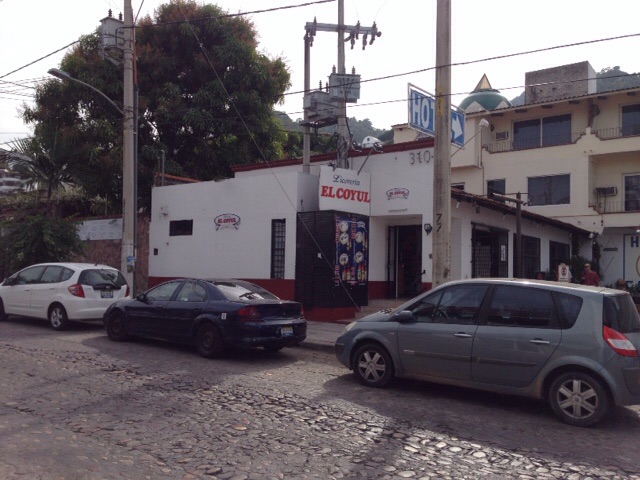 This is El Coyul, where they have a really complete selection of wines and liquor at good prices. 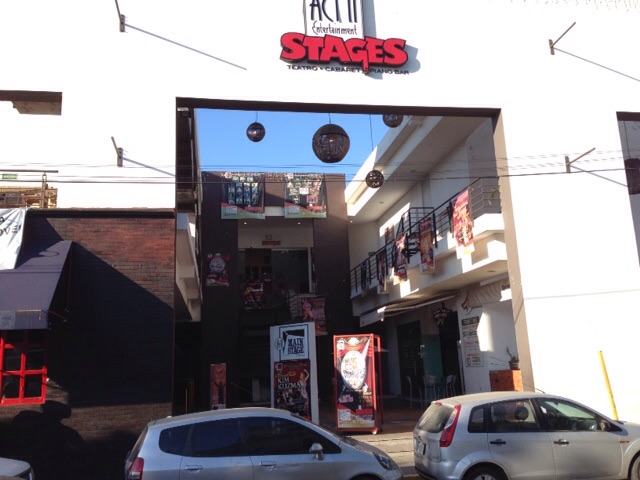 Heading even farther west, this big building is the home of some of the best musical and theater productions in town. 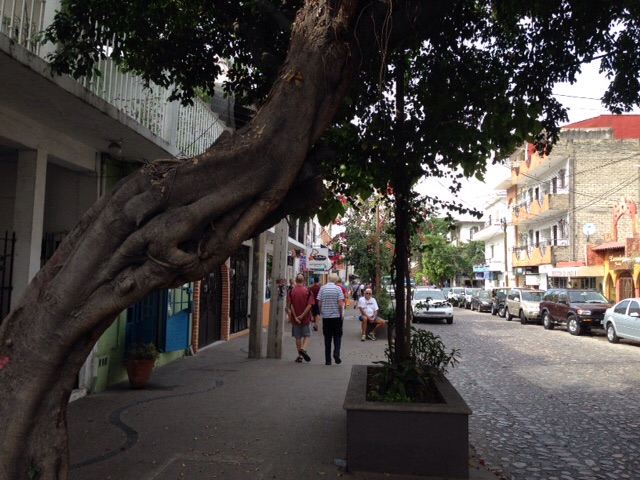 At this point the street begins to change into the better-known, lively area of restaurants and shops. All the planter boxes along this street, as well as a couple of other streets, and the maintenance of a couple of parks were donated by the Puerto Vallarta Garden Club, which we joined in support of their beautification efforts. 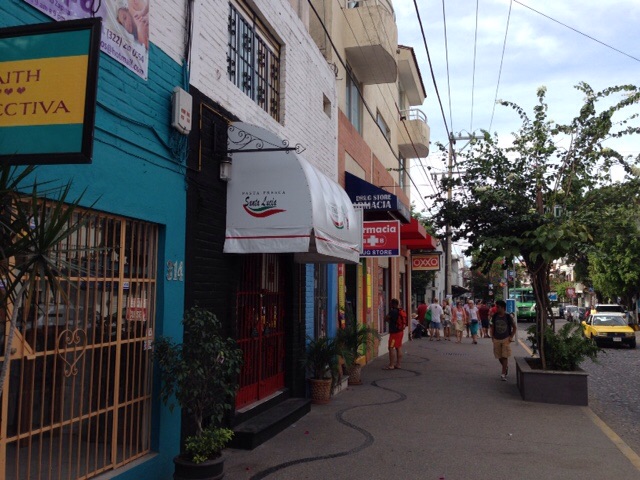 Under the awning is Santa Lucia, the Italian deli where we get really good pasta sauce to take home. The young owner calls me “Doc” since I look like his doctor back in Italy. At the next corner, by the Oxxo store (like a 7-11), is Constitución street. If you were to turn left here it’s two blocks to our apartment. But let’s continue on down Basilio Badillo. 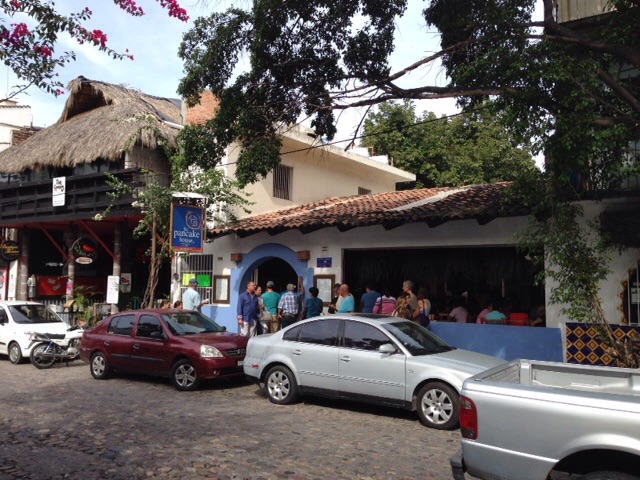 As is usual in the morning, a crowd is waiting to get into Memo’s Pancake House, a favorite breakfast place. 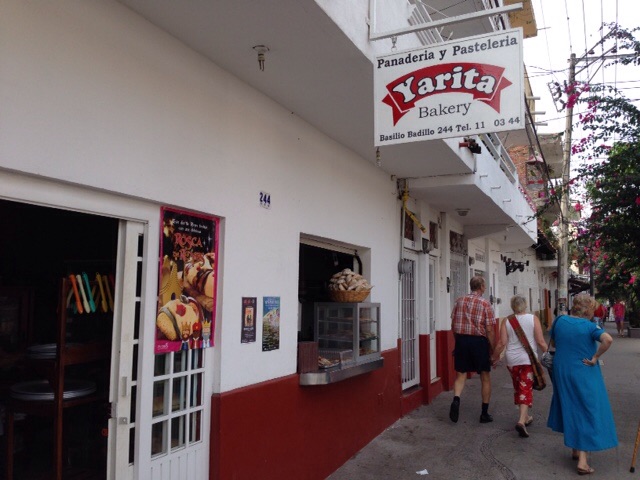 Yarita bakery is famous for its pastries. 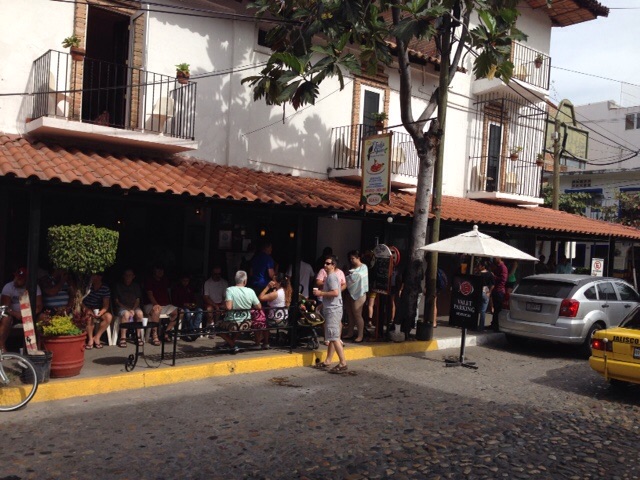 Another crowd gathers outside Fredy’s Tucan, one of the original restaurants in the area and another good breakfast place. 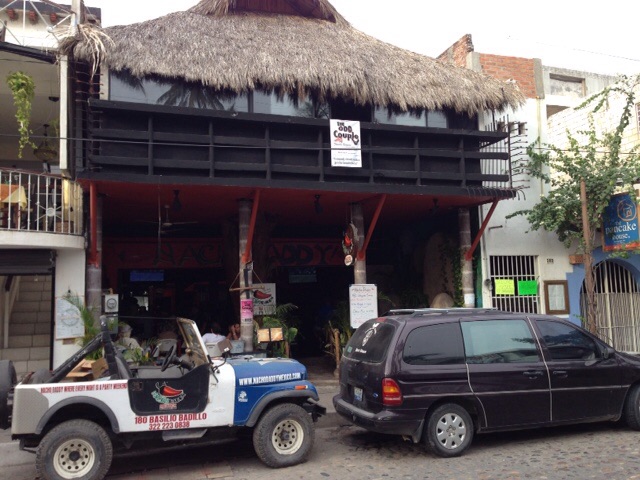 This is Nacho Daddy’s, a great bar and restaurant. They have live music upstairs until late. The owners also sponsor lots of charity events in support of the community. It was here that our ukulele group participated in the underwear raising event shown in a previous post. 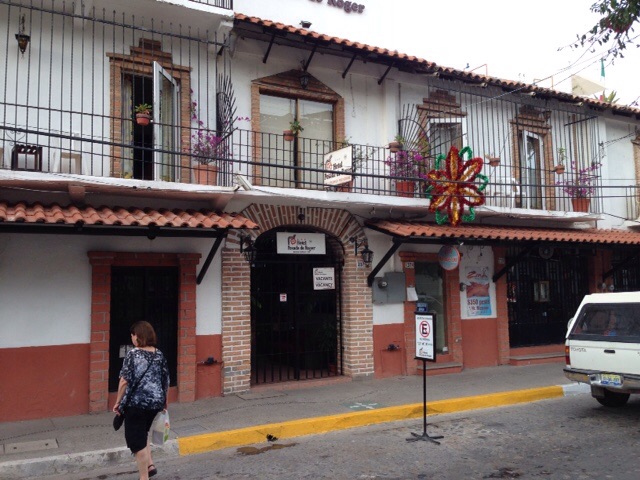 Posada de Roger, a small, popular and relatively inexpensive hotel. Even though it’s on this busy street, it’s traditionally arranged around a central courtyard, making for quiet rooms. 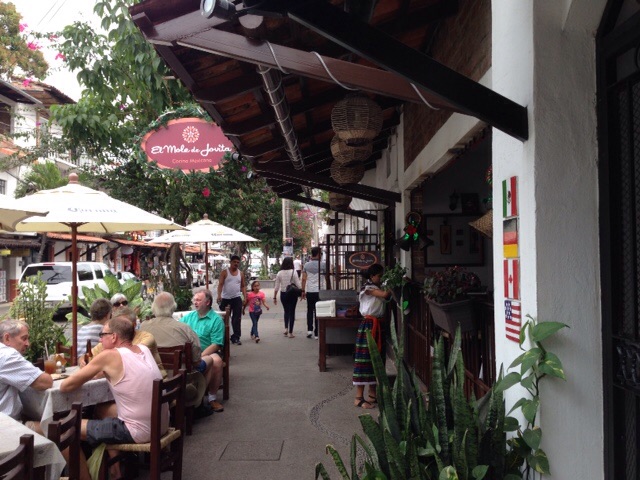 El Mole de Jovita is a great little spot for breakfast, lunch or dinner.  They give you a chip as you pass by which you can dip into the mole for a taste. 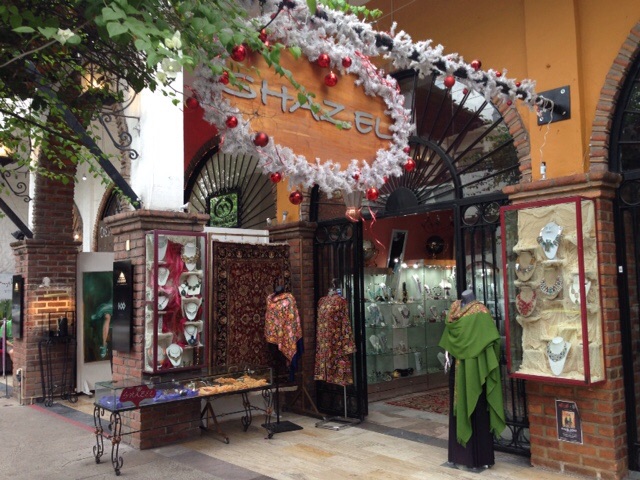 Shopping anyone? This boutique and jewelry store, Shazel, is a great place. It’s next door to: 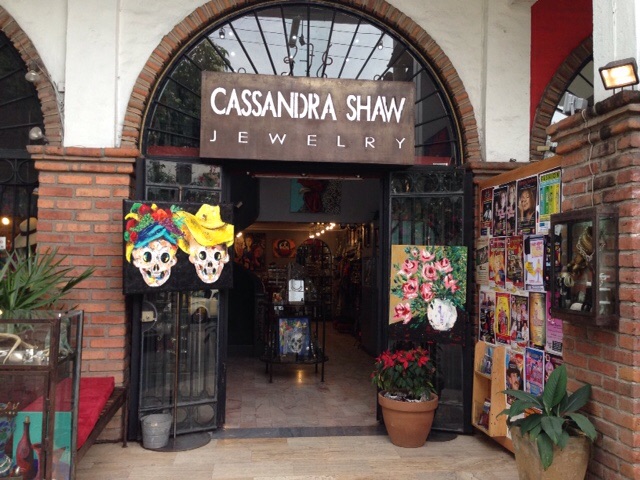 Cassandra Shaw, a jewelry store with incredible wares. The next couple of pics are of the interior. 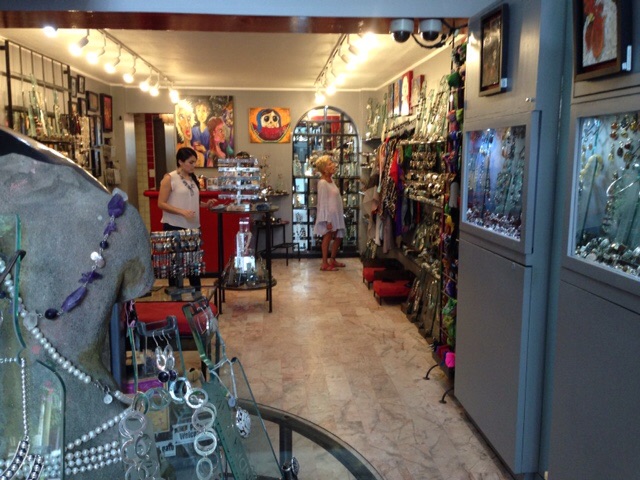 Looking towards the back of Cassandra Shaw. 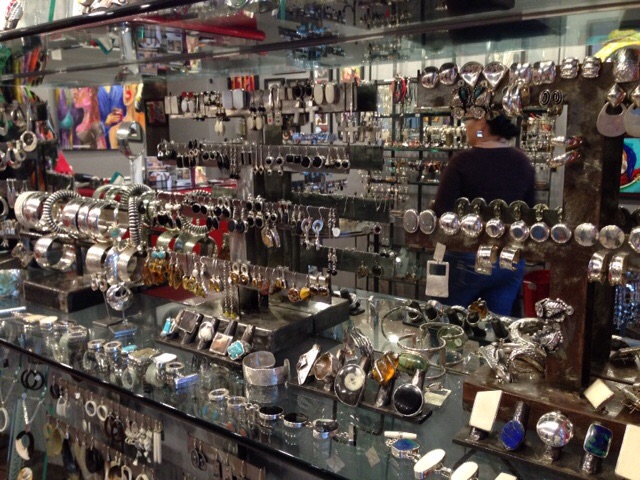 Here is one of the cases in Cassandra Shaw. 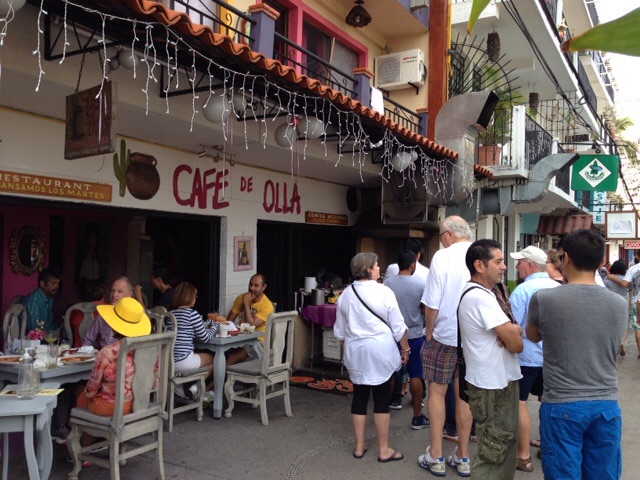 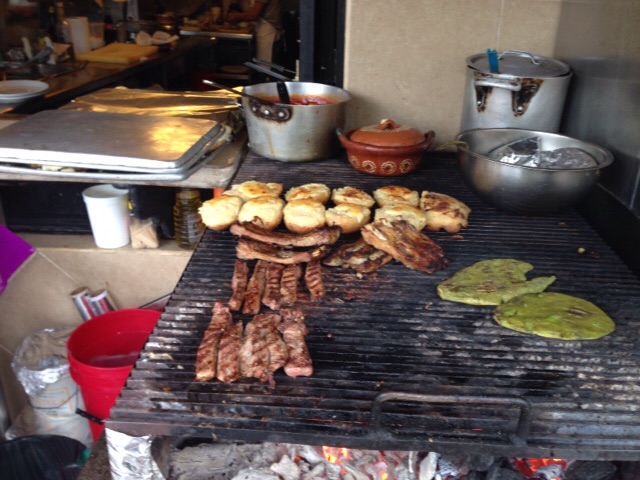 Ribs, stuffed potatoes, and nopalitos on the charcoal grill in front of Café de Olla. The name of the restaurant refers to the traditional way of preparing coffee in Mexico, where the coffee is boiled in a pot (olla) with cinnamon. 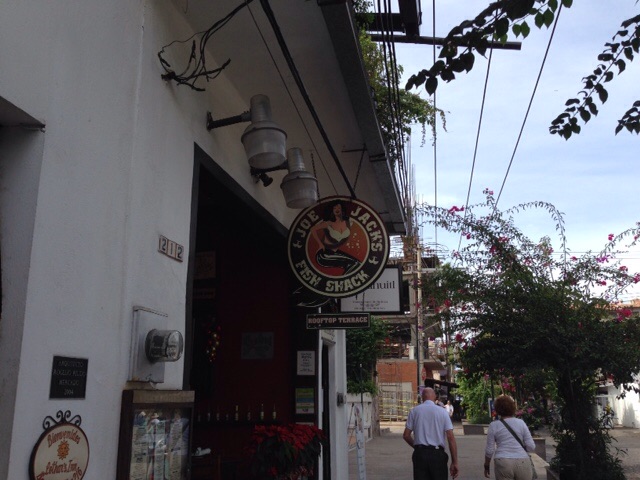 This is Joe Jack’s Fish Shack, a long-time fixture of Basilio Badillo, which serves really good fish dishes. The fish and chips here are probably the best I have ever tasted, and Peggy likes the Nicoise salad with grilled shrimp. 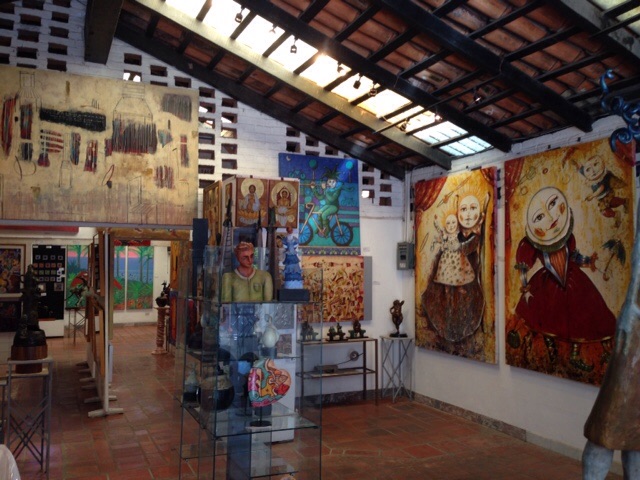 We are stopping off in the Galeria Dante. The variety and quality of the art here is amazing. This is a shot of some of the paintings. 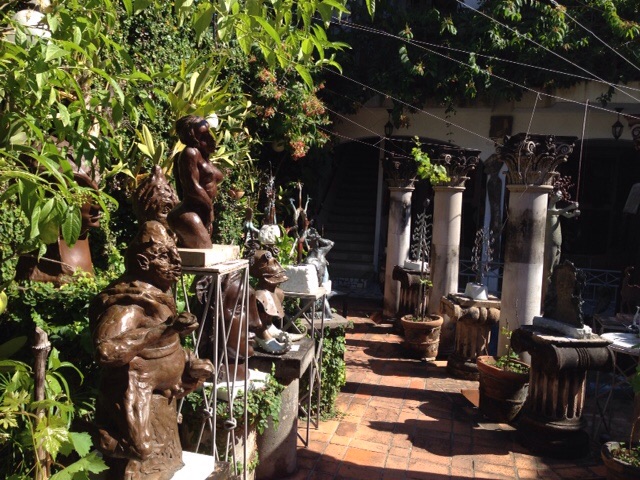 And this is part of the sculpture garden There is a wine bar and restaurant above that looks down on this space with its fountains and art. 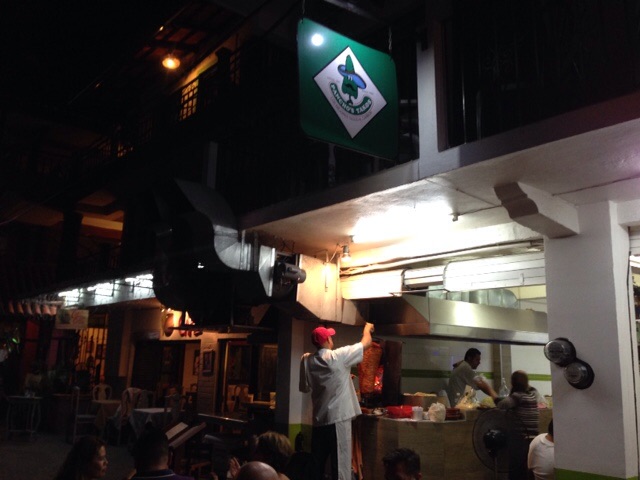 In the evening, Pancho’s Takos comes to life. It is a popular and inexpensive little restaurant. 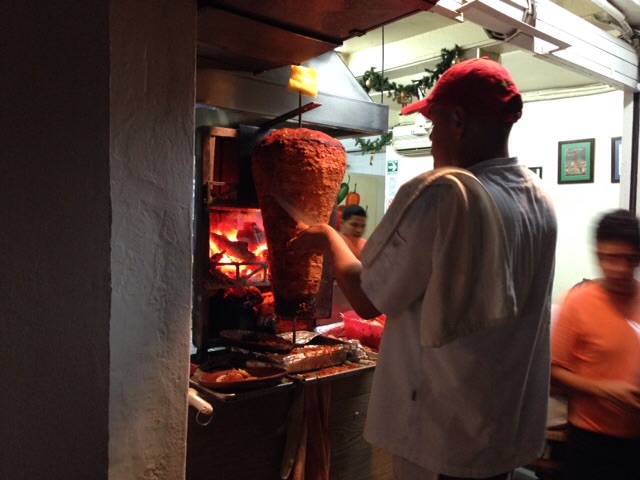 Pancho’s Takos is known for its tacos al pastor, kind of like Greek gyros except the meat is marinated pork (or a mixture of pork and veal), not lamb, and it’s served in a  corn tortilla. 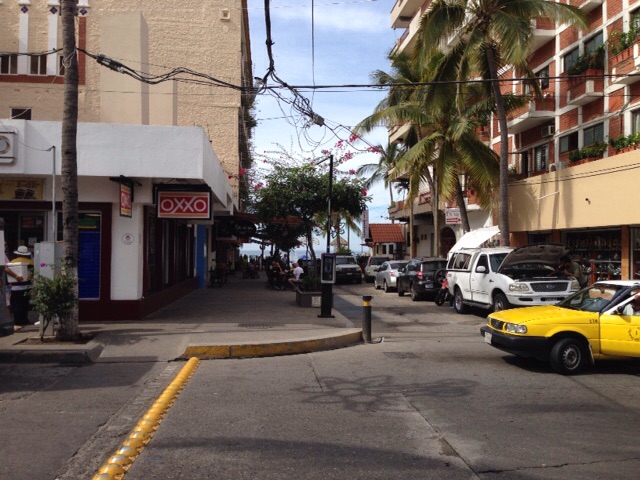 And now we’re at the end of Calle Basilio Badillo, concluding the tour.  This cross street is Olas Altas, more or less the other axis of the tourist part of the Romantic Zone. The ocean is right down there at the end of that block.

For those of you familiar with Puerto Vallarta, you know that there’s a lot more I could show about Calle Basilio Badillo. But I hope I have given you a good idea of the street and all that if offers. If I have left your favorite place out, let me know, and I’ll try to include it in a future article.

Before we say hasta luego until the next post, here is a parting shot.  Joining me, Peggy and Eve is Bruce Kelly, who along with his wife Mary publish a great blog on life in Puerto Vallarta, www.setfreeinmexico.com. Check it out; you won’t be disappointed! 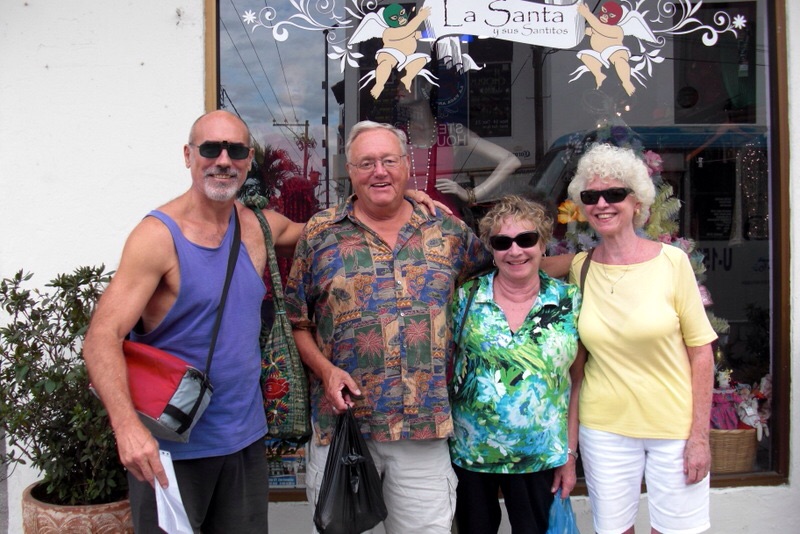 Well, that’s it for this edition of OnVallartaTime. See you soon!