Hello, friends and family, and welcome to another edition of OnVallartaTime! Here it is Christmas already — where does the time go? Here, for us, Vallarta Time slips by, each beautiful day blending into the next. For the most part, the weather has been perfect, highs in the low 80’s and lows in the 60’s. Some days, like today, it clouds up in the afternoon. This usually means that it’s about to rain somewhere in the Banderas Bay region, hardly ever where we are. In the past couple of weeks, the most we have gotten is a drop or two. Then the skies dawn clear, signalling another beautiful day coming our way.

We haven’t been doing anything special, just living our dream in this extraordinary place! We have been going to the beach most days, unless there’s a day we need to take for grocery shopping or if we have something else to do. We have been eating out more, taking advantage of the great restaurants within walking distance of our apartment.

I’ve also continued to meet with our little ukulele group, Los Vinolentos, each week on the beach. We even had a gig! Last year, a charity event provided money for school uniforms for the Refugio children (a poor children’s charity). Then they noticed the children weren’t wearing them this year. When asked why, the children replied it was because they didn’t have any underwear! A local bar-restaurant, Nacho Daddy’s, held an event to raise money for underwear, and Los Vinolentos provided entertainment for the event. Here’s a picture of the underwear that was brought as admission. 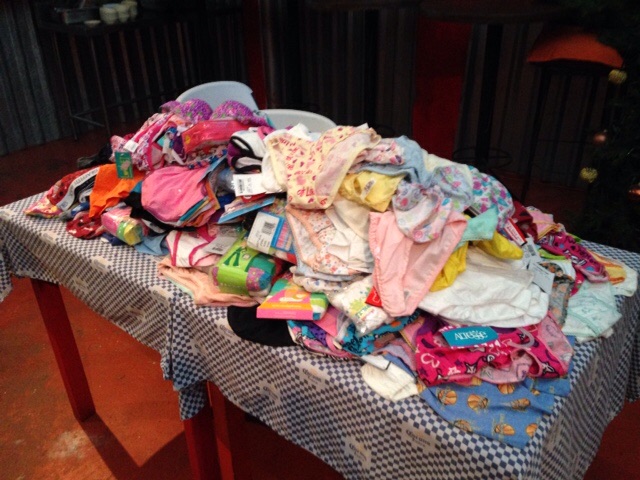 Here in Puerto Vallarta, while all the stores are decked out for the holidays, Christmas is not the commercial holiday it is in the US. Also, Christmas trees are not the centerpiece of the home decorations in Mexico. Here the focus is on the family nativity scene, called the Nacimiento. In many homes, these are very elaborate, with figurines and traditions passed down from generation to generation. But Christmas trees are becoming more frequent, and you see trees for sale in some of the stores. Many commercial establishments boast a tree, especially those catering to tourists, like hotels.

In Mexico, Santa Claus isn’t much of a big deal either. Here, it is the Three Wise Men, Los Tres Magos, who bring the gifts, as they brought gifts to the baby Jesus according to the New Testament. And although it’s becoming more and more customary to give children presents on Christmas, usually Christmas Eve, this is an imported custom. Traditionally the children put out their shoes to be filled by Los Tres Magos on January 6th, when they arrived in Bethlehem. In Mexico, Christmas Eve, La Noche Buena, is a more important holiday than Christmas Day. On Noche Buena families gather, have feasts and parties and go to midnight mass, Misa de Gallo.

For Christmas this year, I’m including a few pictures of the symbols of Christmas from around town. 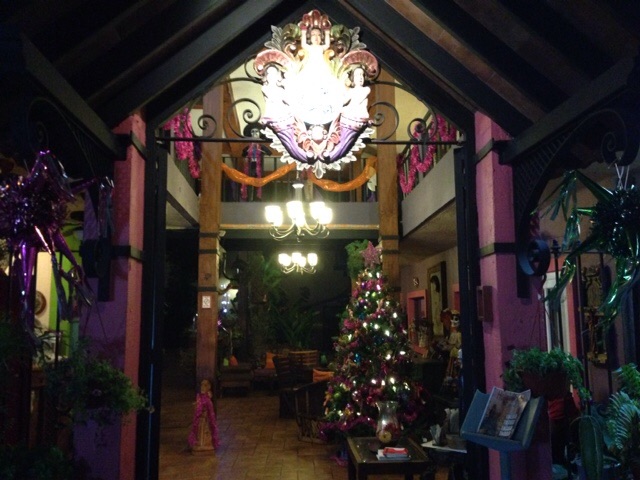 This is a Christmas tree in the elaborately decorated lobby of a hotel. 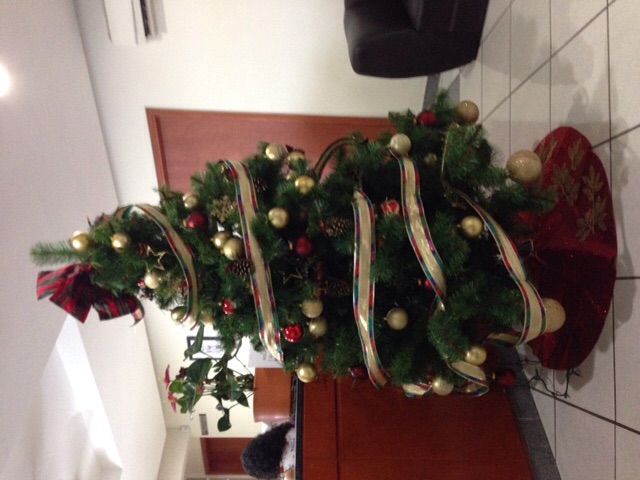 A tree in a medical office. 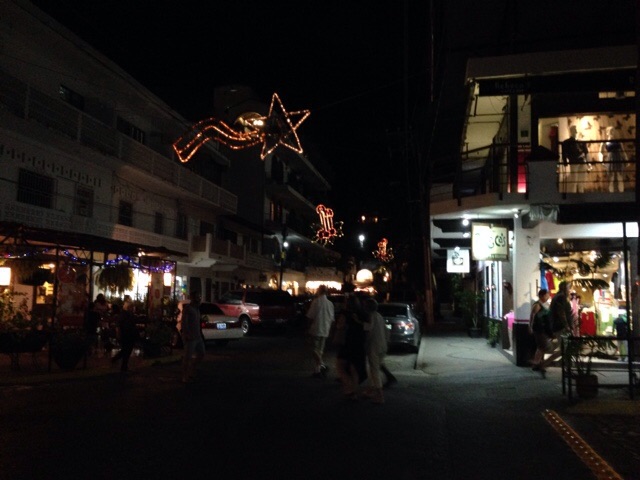 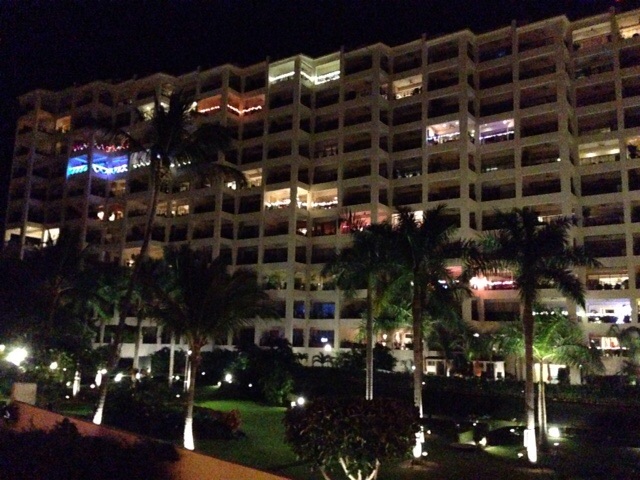 Holiday lights on some of the terraces in a giant condo building, Molino de Agua, next to the Rio Cuale. 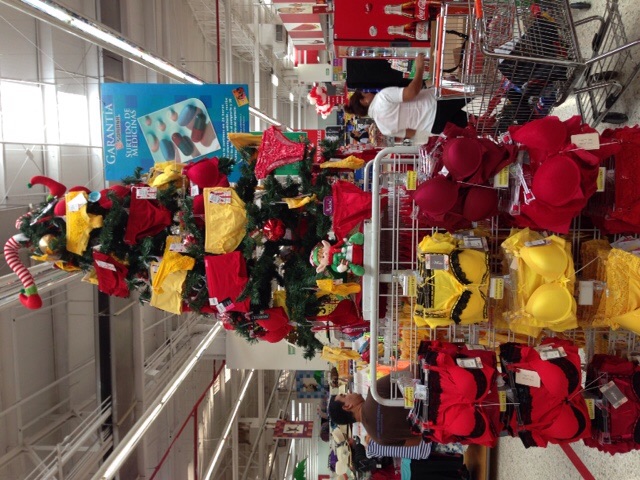 A very unusual Christmas tree, made of women’s underwear, a display in a department store. Notice the “Elf on the Shelf.” 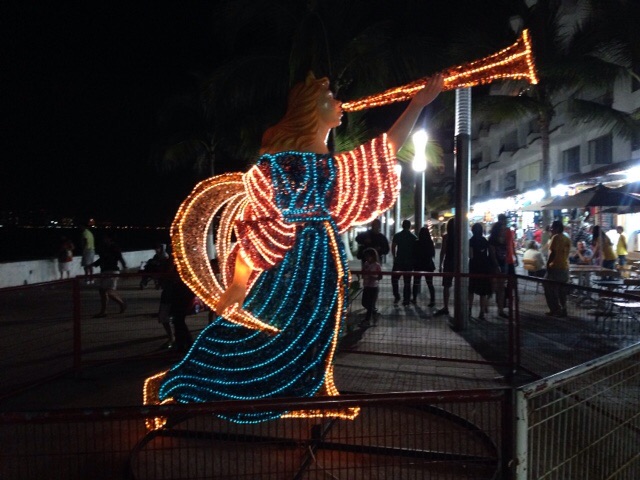 A Herald Angel in lights on the Malecón, Puerto Vallarta’s seawall promenade. 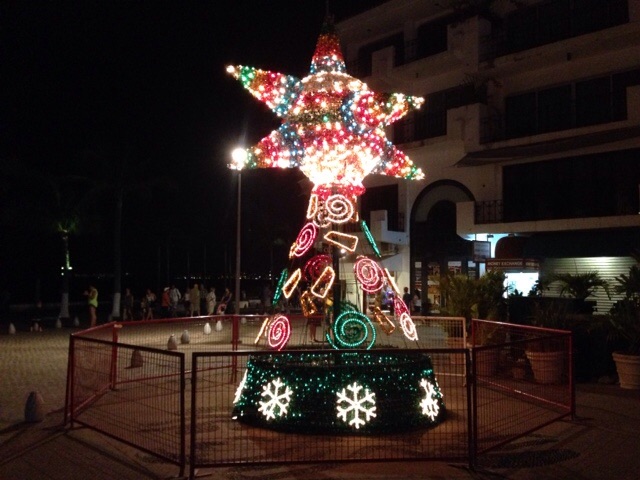 Also on the Malecón, a piñata spilling all its goodies. 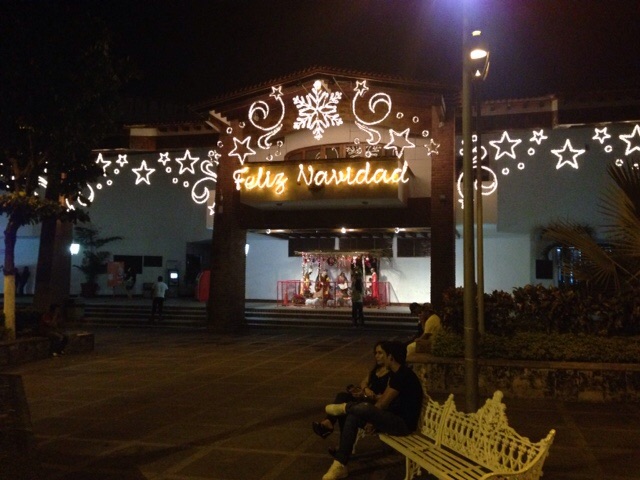 A Christmas message in lights on City Hall in the town square. 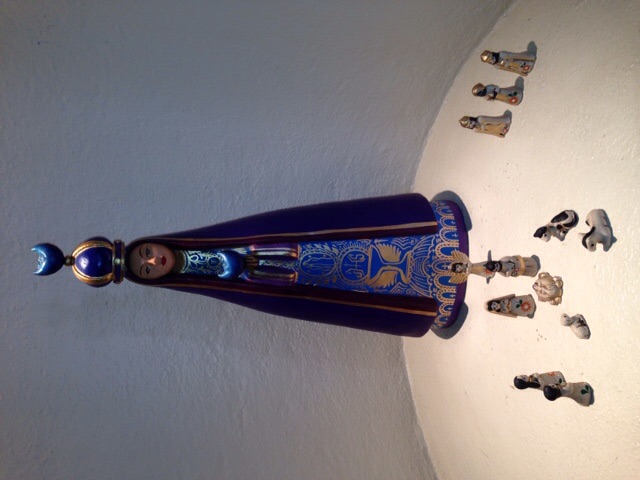 Our own little Nacimiento, in the nicho in front of our virgin, whom we fondly named Virginia. Note that Los Tres Magos have not quite arrived yet… 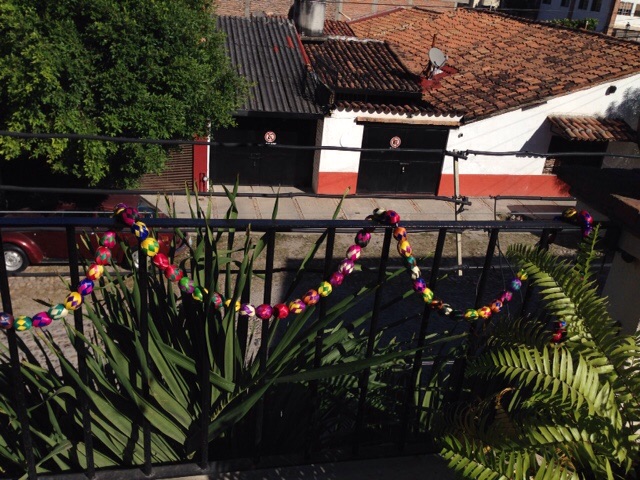 The handmade garland decorating our terrace, made by a beach vendor and his family. 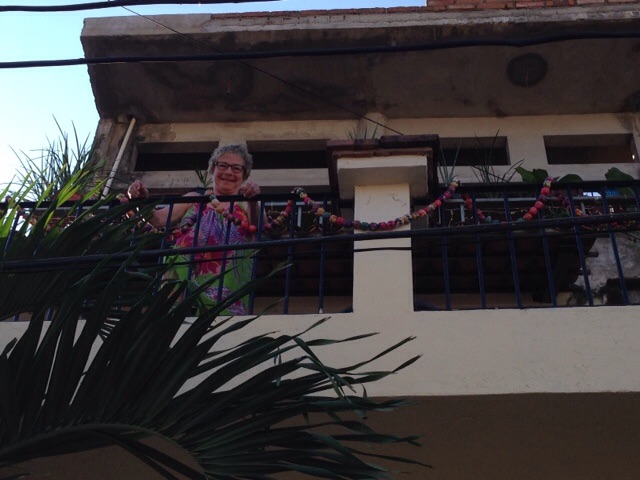 Looking up at Peggy on the terrace.

And finally, a Christmas card of sorts! 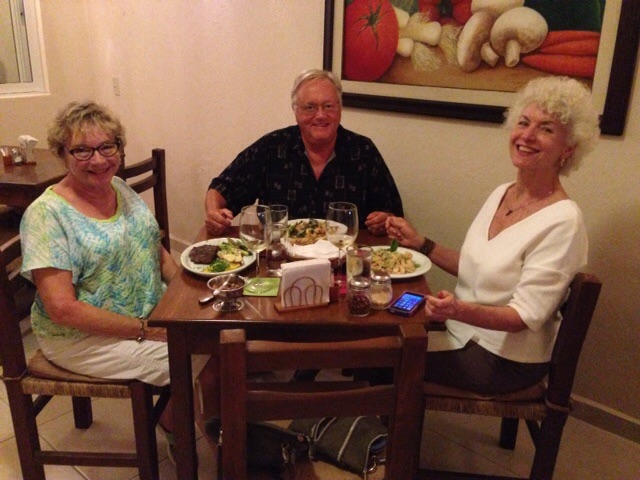 Peggy, Eve and I out to dinner at a great little restaurant we found, Chenan2.