Welcome once again to OnVallartaTime!

This has been a strange week… In the wake of Christmas we have had on-and-off showery rain for the last five days, and forecasts say it could be with us for a few days more.  When I say “showery,” I don’t mean light little springlike events.  These showers are monsters, and it really comes down, sometimes with thunder and lightning. This is highly unusual weather for the month of December, especially late December. Puerto Vallarta’s climate is officially classified as Tropical wet and dry, with rainy summers and dry winters. For us the rain has been a minor inconvenience, but I really feel sorry for the tourists who may only be here for the holiday week, and for those businesses who rely on them, like our friends at the Swell Beach Club.

First, here are some pictures of the rain, then I’d like to show you a special place, the El Rio BBQ Restaurant and Bar, on the Cuale River. 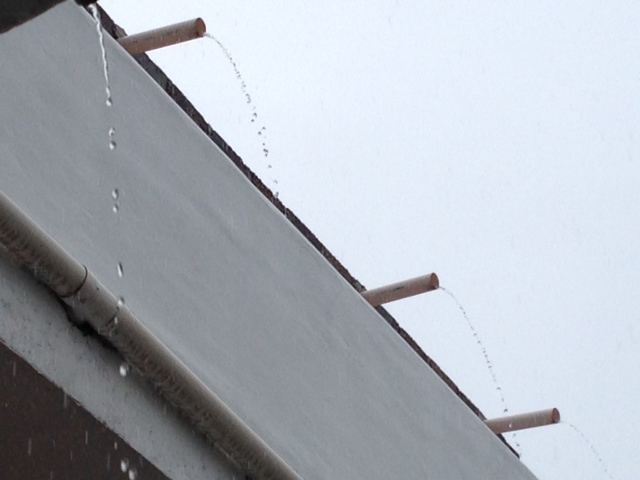 I’ve discovered it’s really hard to take pictures of rain! But this shows the runoff from the gutters. These are above our deck, jutting out from the top floor. 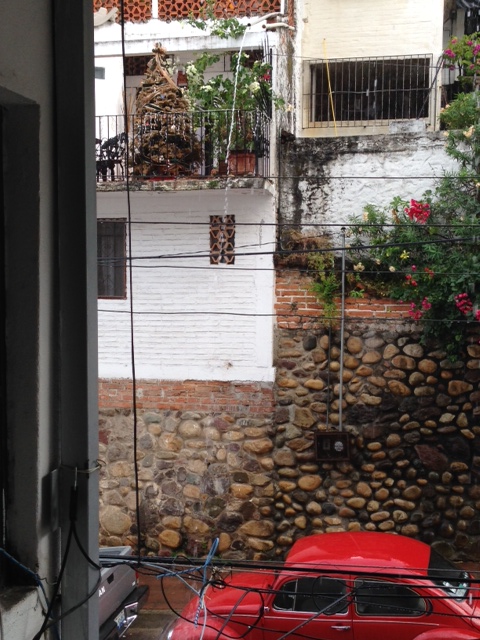 This is a rainy view from our entrance to across the street.  This gutter is dumping onto a VW.  Bonus: car wash! 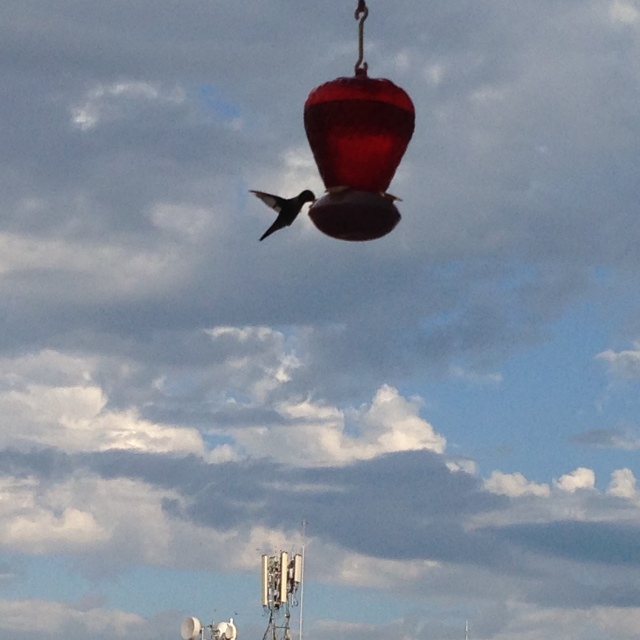 The hummingbirds keep coming to our feeder, between showers. 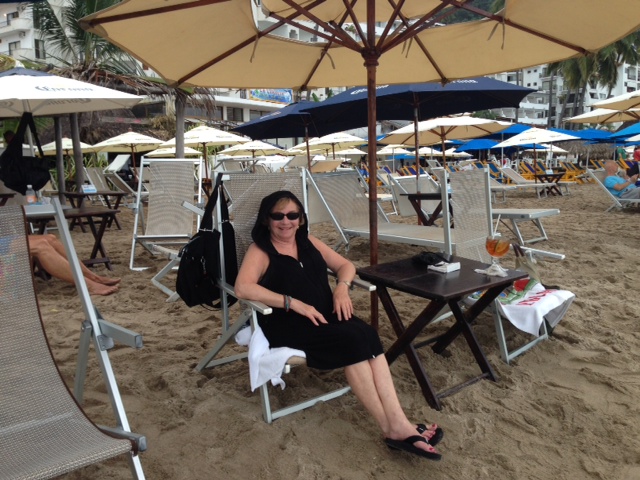 True Oregonians, and diehards that we are, we tried out the beach anyway.  Where is everybody? This pic of Peggy was taken just before the skies opened up once again, chasing us inside the bar at Swell. 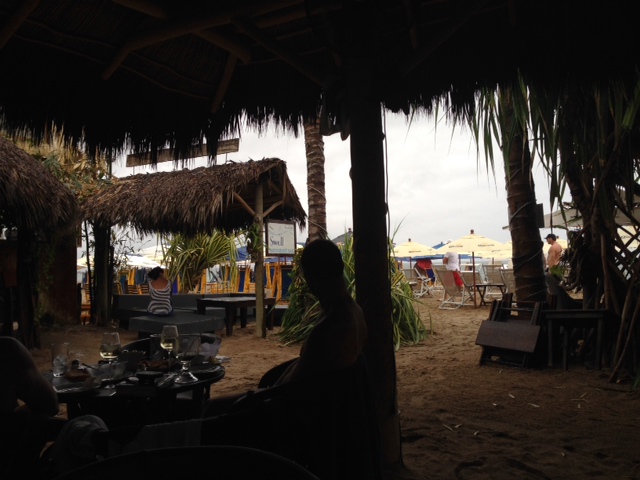 We’re trapped by the rain in the bar at the Swell Beach Club .  How sad, poor us — nothing to do but eat and drink and relax! 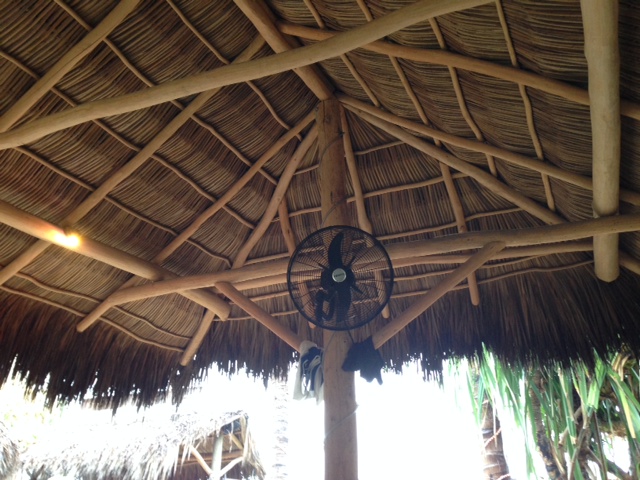 Here’s the inside of the palapa keeping us dry.  I’m fascinated by palapa construction. 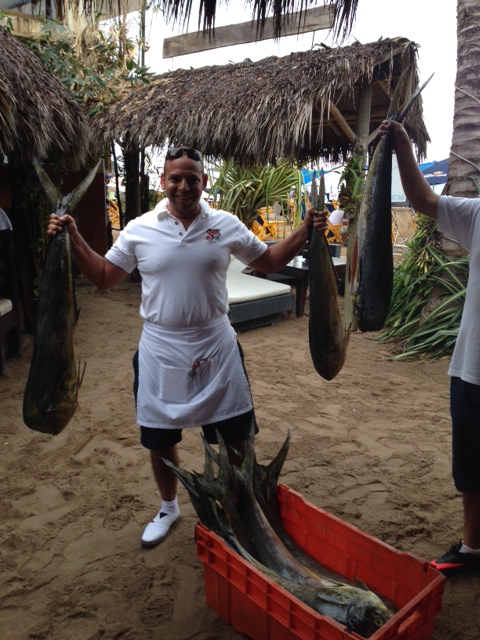 While we were there, Swell got its fish delivery. These are dorado (mahi-mahi). The fish are delivered by a purveyor at Punta de Mita, caught earlier that day off the Marietas Islands.

The Cuale River (Rio Cuale) is the southernmost of three rivers that flow into Bandreras Bay in the Puerto Vallarta environs.  The others, going north, are the Pitillal, north of the downtown area, and the Ameca, the largest, which is the dividing line between the states of Jalisco and Nayarit. The Cuale is a smallish river, but it becomes a raging torrent in the rainy season, and it even changed course during Hurricane Lily in 1971, displacing many city residents along its banks. 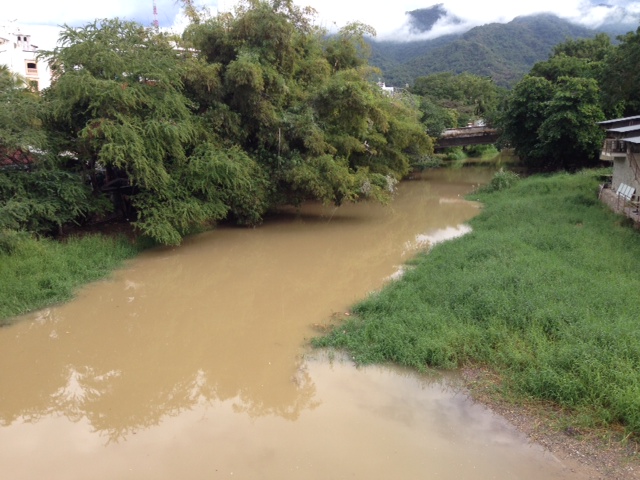 Here’s the Rio Cuale just before it flows into Banderas Bay. It’s very turbid from the recent rains. 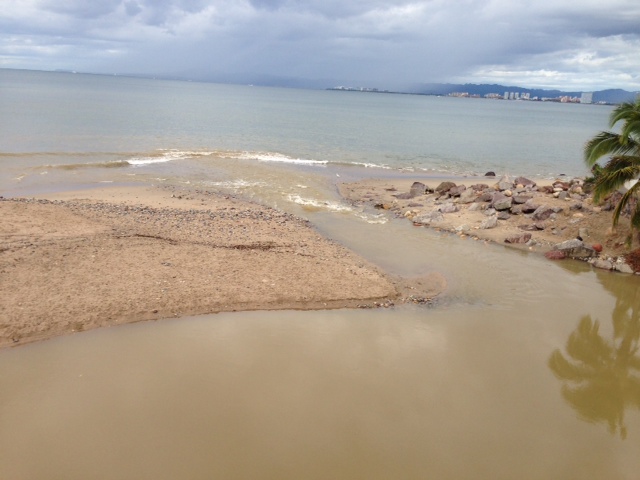 Here is the Rio Cuale as it empties into the bay.  Now that you have seen the river’s mouth, let’s go upriver a few miles.

Farther up the Rio Cuale, across a bridge on the other side of the small town of Paso Ancho, is the El Rio BBQ Restaurant and Bar. This spot is rapidly gaining popularity, and amazingly enough is owned by a man from Portland, with a BBQ chef also from Portland. It has become somewhat of a hangout for us. On Wednesday and Friday afternoons they have live music, and Sundays they have a BBQ buffet with music, and the place fills up with US and Canadian expats as well as locals.

Since we like to avoid the crowds, we have started going on Saturdays, when we often have nearly the whole place to ourselves. We like to sit under an umbrella, read and relax for the afternoon, and have a great lunch of the BBQ ribs the restaurant is known for. The resident dog, Julieta, happily finishes off the rib bones under the table. If you want, you can go swimming in the river, a refreshing cool-off. The location itself is spectacular, with flowing clear water under a high cliff, truly a special place.

Even though it seems like another world away from Puerto Vallarta, it’s really just a short cab ride from our condo. You can also take a city bus to Paso Ancho, but the convenience of the taxi can’t be beat, for only $5-6 US. For the return the restaurant will call a cab for you. 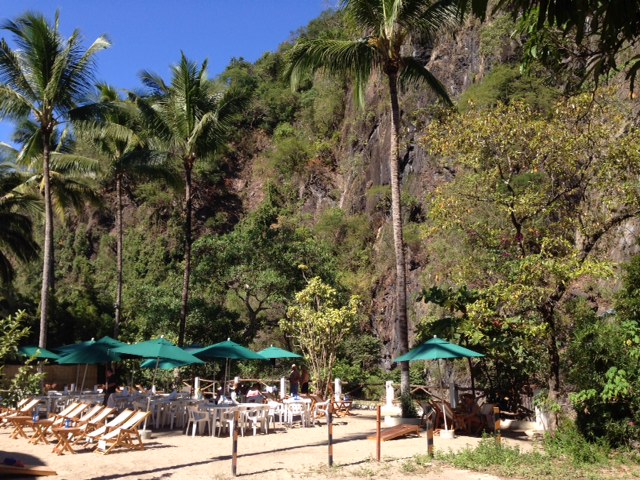 This is a good view of the part of the restaurant that’s outside along the river. 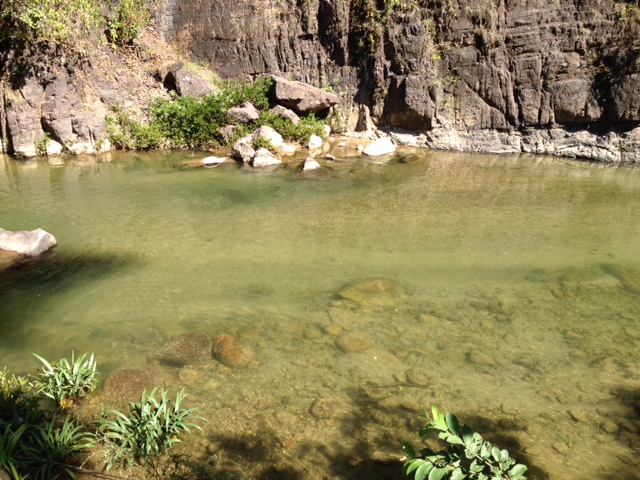 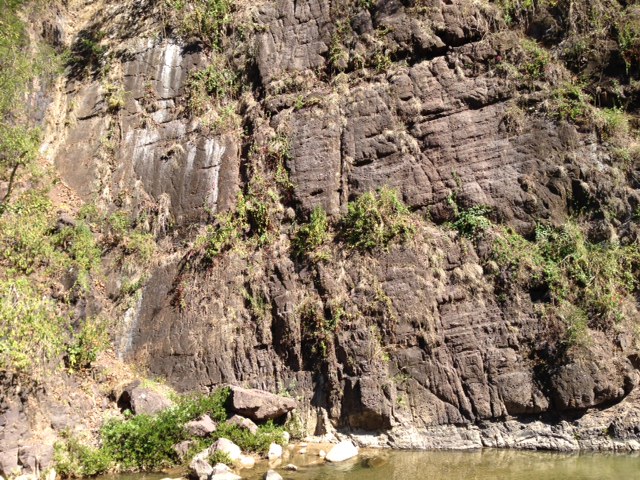 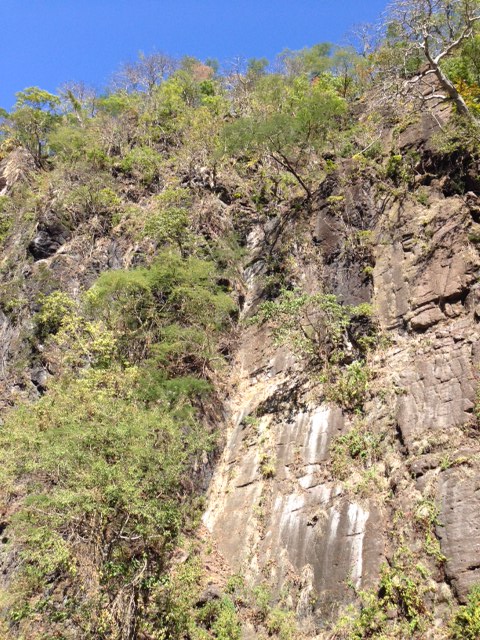 Another view of the cliff, showing the top and the trees holding on to the face. Sometimes you can see golden eagles looking for a meal along the top. 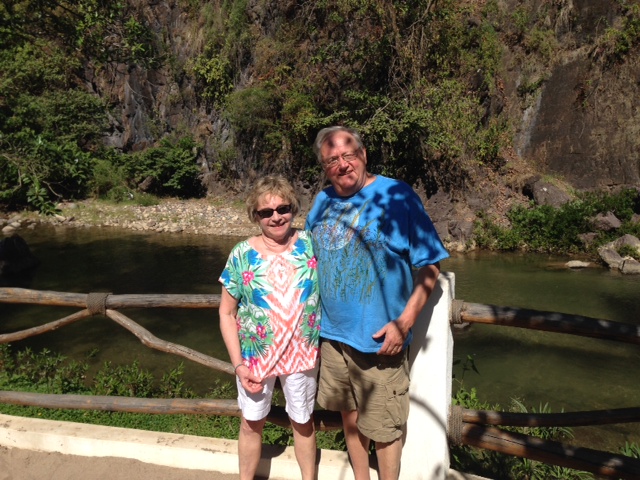 Peggy and I next to the water. 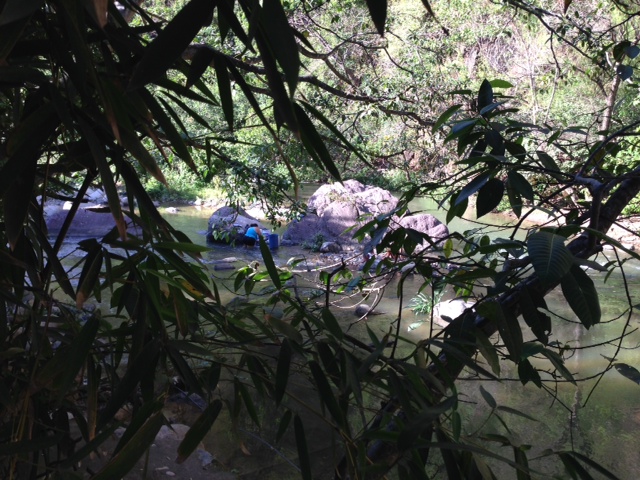 A view downstream. If you look closely, you can see a woman and her children doing the family laundry on the rocks. 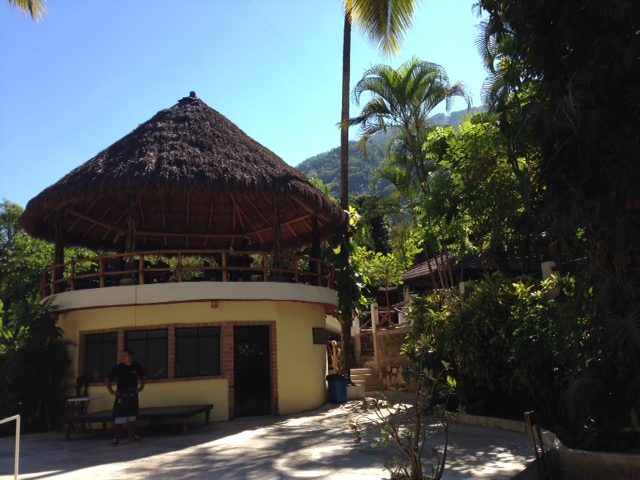 The big palapa at the restaurant. That’s the stage for the live music in front of the structure. 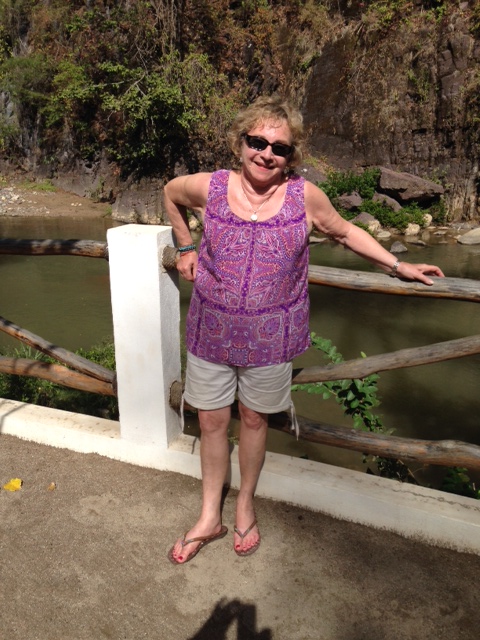 Peggy in front of the river 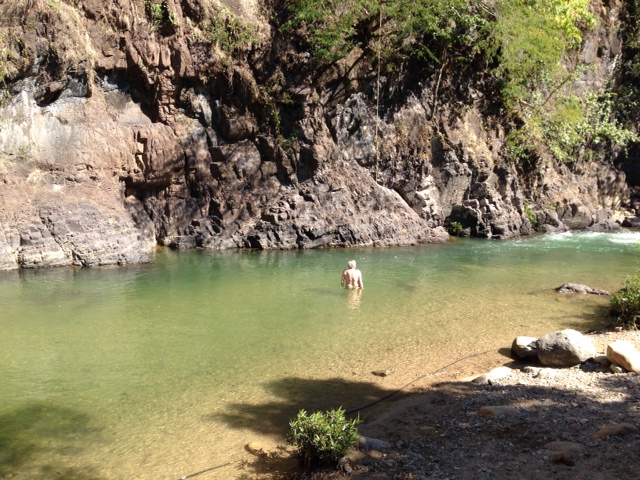 Me in the river.  If there’s water, I can’t stay out of it. This mountain runoff is colder than the ocean. 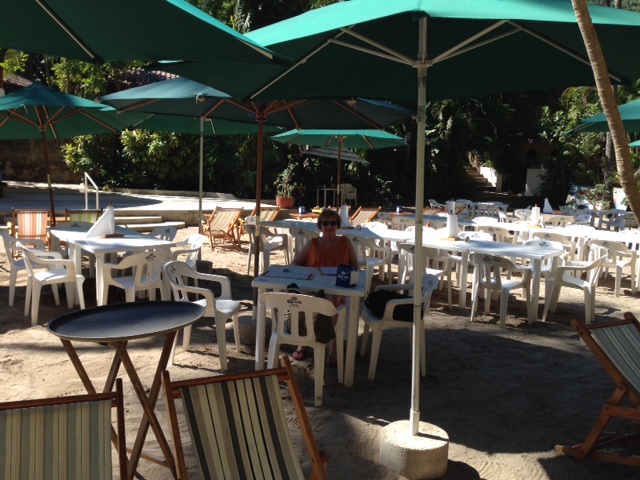 Peggy at our table 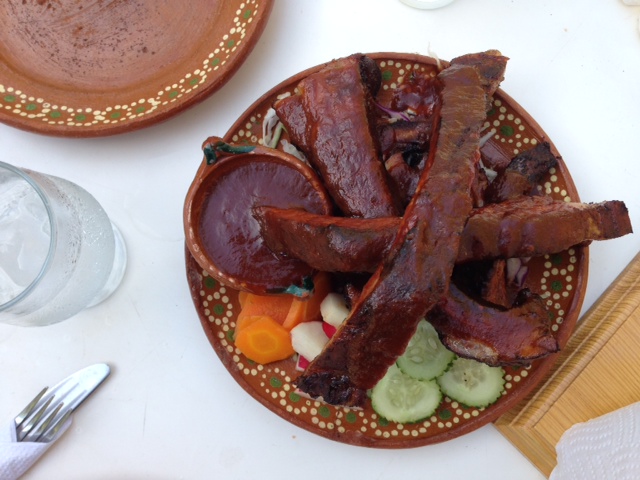 Well, that’s it for this post.  Hope you enjoyed it, and thanks for reading OnVallartaTime! Let’s hope the rain stops soon so things can get back to normal. Happy New Year, everyone,  Feliz Año Nuevo!